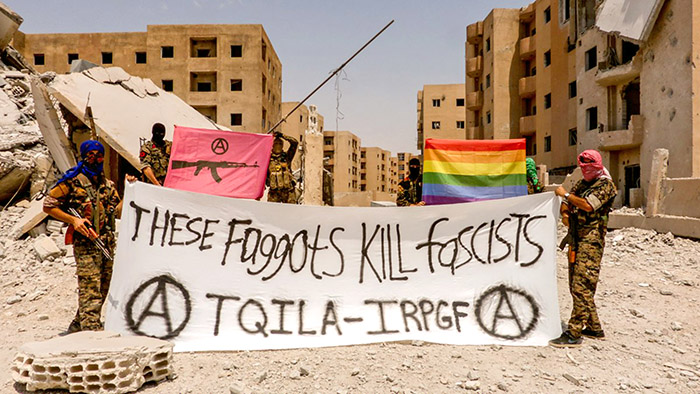 LGBT supporters are fighting back against the Islamic State militant group (ISIS) on the Syrian battlefield after three years of persecution in which their community suffered stoning and executions from rooftops, reports Newsweek’s Jack Moore.

A group of international volunteers fighting with Kurdish forces against ISIS in northern Syria have declared the first LGBT military unit created to battle the jihadi group. The name of the unit is The Queer Insurrection and Liberation Army, or TQILA. The International Revolutionary People’s Guerrilla Forces (IRPGF), an anarchist movement, announced the group’s creation last month.

“The images of gay men being thrown off roofs and stoned to death by Daesh was something we could not idly watch.”

IRPGF is a unit in the International Freedom Battalion, a collection of foreign fighters who traveled to northern Syria to battle ISIS alongside the Kurdish militia known as the YPG, or People’s Protection Units, reports Moore. It was only set up in April, two months ahead of the final stage of a Kurdish-Arab offensive backed by the U.S.-led coalition to liberate the eastern Syrian city of Raqqa.

A statement posted by the group on Twitter said its members “seek to smash the gender binary and advance the women’s revolution as well as the broader gender and sexual revolution.”

It remains unknown how many personnel will be involved in the unit, and how many are members of the LGBT community. Heval Rojhilat, spokesperson for TQILA, speaking to Newsweek, would not reveal numbers for security reasons.

“Many of our comrades are within the LGBT*QI+ community,” Rojhilat says. “We are already fighting in Raqqa.”

The group responded to a comment on Twitter, saying it pronounced the new unit’s name as “Tequila.”

The group was formed as its members had “watched in horror as fascist and extremist forces around the world have attacked the Queer community and murdered countless of our community members citing that they are ‘ill,’ ‘sick,’ and ‘unnatural.’”

The statement, using an Arabic acronym for ISIS, continues: “The images of gay men being thrown off roofs and stoned to death by Daesh was something we could not idly watch.”

The statement ends with the slogan: “Shoot back! These faggots kill fascists!” The group’s logo is a black AK-47 machine gun on a pink background.

ISIS’s Sharia courts have declared homosexuality to be a capital offense, one deserving of severe and deadly punishment.