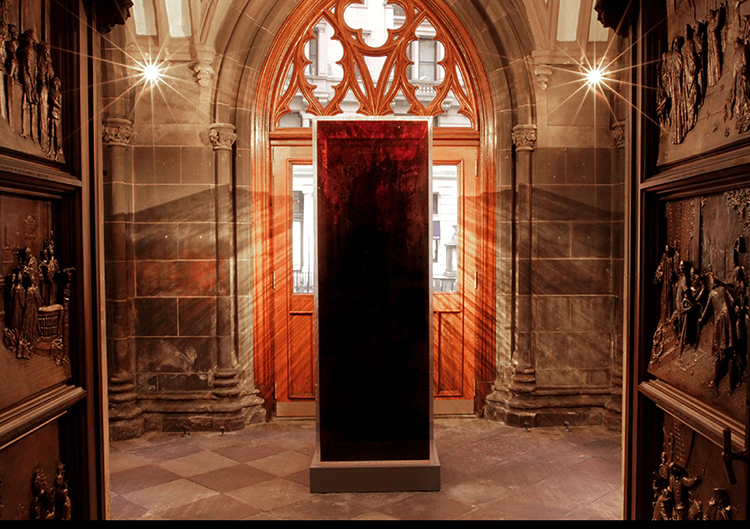 Jordan Eagles on his “Blood Mirror”—a protest against the FDA’s 33 year long ban against the donation of blood by gay and bisexual men.

Made from human blood encased in resin, the Blood Mirror looms like something from another time. It casts strange red shadows and it’s inky scarlet surface hints at primordial depths. But there is a warmth there. A calm vitality. A purpose.

Despite it’s appearance, and the accompanying almost undeniable awe that it inspires, the Blood Mirror is no ancient artifact, but the work of Jordan Eagles, a New York-based blood artist who created the Mirror as a protest against the FDA’s 33 years long ban against the donation of blood by gay and bisexual men.

Growing up in Manhattan and New Jersey, Eagles never set out to be an activist—or even an artist. He began working with blood in 1998 while studying at NYU.

“I was having conversations with my best friend at the time about life after death and the connection between body and spirit. Simultaneously, I was looking through images of childbirth from a medical encyclopedia. These images were black and white line illustrations with no blood—and I understood birth to be a very bloody process. So the combination of looking at images of where life begins that lacked the blood I knew they should have and talking with my friend  about what happens when you die inspired me to make these four paintings. This was my way of answering the friendly argument that we were having.”

After those first four birth paintings Eagles didn’t make any more art for another two years. “I wasn’t looking to be an artist. The concept that I could be an artist wasn’t even on the radar.”

He moved to Los Angeles and took a job in creative advertising, but he didn’t find the corporate world an easy fit, and eventually found himself once again drawn to making art using blood.

“It was when I started making art again two years latter I realized I had to do it. I would come home from work and all I would do was spend my time experimenting, for no reason other than I wanted to do it.”

Blood Mirror is Eagles’ first project using human blood. “The subject has been on my mind for a very long time, blood donation, gay men being turned away. I was turned away from donating blood when i was in my early 20s… I wasn’t even having a lot of sex back then. It was illogical to be turned away—and embarrassing. It didn’t make sense to me. I knew that I was a healthy young man who wanted to do my civic duty by donating blood. Both my parents donate blood, frequently. I was raised in a family culture where that’s just something you do. And I’m not allowed to participate. That bothered me, a lot.”

“There was a moment where I just had this sense that there may be a way for me help. People weren’t really discussing this issue. The FDA hadn’t issued any public comment periods in almost three decades. It was a very under the radar subject. And given both my skill set of being able to preserve blood, and being a gay man who is pissed-off about the issue, I felt like maybe there is a way to do this, to engage a conversation about it.”

Jordan’s first step was to develop a team. “The project itself is collaborative in the sense that it obviously requires the generous donations of many men, but also it was a sensitive issue. There were a lot of questions about how to deal with this topic, so it was important to get a creative team.”

Filmmaker, writer and advocate Leo Herrera joined Eagles, along with the Carry Nation—the passionate and politically active DJ duo of Will Automagic & Nita Aviance. “The four of us would get together, sit in the studio, order Chinese take-out and brainstorm, discuss the issues <<<beyond>>> the policy. There are so many other issues that can be raised when you talk about our community and our blood… And if you’re only going to use 9 people, for example, how do you represent a community? You also don’t want to make caricatures out of people, but at the same time you don’t know any of these people yet.”

Eventually the group decided on the following nine men:

Two days after Jordan and his team collected blood from the first four participants—the FDA announced that it would accept blood from gay men who had been celibate for one year. A development which threw the whole project into doubt.

“When we started this project there was no conversations about the blood ban at all, then suddenly half way through there is this major shift. Which left us thinking, do we even need to continue?” Ultimately Jordan and his team decided that the new policy was in some ways worse than the original lifetime ban.

“A lifetime ban implemented in 1983, as unfortunate as it is, I can understand. To make a change in 2015 that has zero basis in science is an absolute slap in the face. Asking gay men to be celibate for a year is still, in effect, a life-time ban. And to require that from gay people but not heterosexuals? It’s worse. It’s saying that the government doesn’t trust science.”

Eventually they added the blood of 50 men who were all on PrEP, and the sculpture became a mirror in truth, “I wanted to incorporate the idea that the viewer could see themselves through the blood of their gay brothers. When we had the first nine men then the views becomes the 10th participant. Now there are 59 blood donations It enables the views to become part of it.”

“The idea here is that 50 tubes, when you combine all the blood, fills one blood bag. each tube is 10ml, and a bag is 500ml. So you end up with a community pint. It’s a powerful symbol of the lives gay men could be saving if we were allowed to donate.”

SKIN IN THE GAME

Blood Mirror clearly began a conversation, but the tragedy in Orlando made the Blood Ban a national issue over night. “The FDA had been fielding a lot of anger from the gay community once they put the one year celibacy policy into place, then Orlando happened, and I think the combination of those two things prompted the FDA to announce a new public comment period.” Blood Mirror evolved, ultimately, into the Blood Equality Campaign.

“FCB Health (a New York City based advertising agency creating award-winning work for consumers, patients, and healthcare professionals) approached me about doing a pro bono campaign about this issue. I introduced them to GMHC and the three of us joined together to form Blood Equality. That was founded with two purposes in mind: 1) putting together an awareness campaign to continue keeping this issue in the public eye and educating people about it and 2) creating a medical board to address how this issue could be resolved.

And so what we ended up doing with the blood equality campaign is that 46 of the men from the PrEP layer let their quotes and images be used as the campaign. Which was great because all of the people who were speaking on behalf of this campaign had skin in the game in that they had all donated blood.”

In advance of December 1st, World AIDS Day, this  panel examines the FDA’s ban on blood donations from gay and bisexual men, which currently requires celibacy for one year before donating. Panelists include Brad Sears, Associate Dean and Executive Director of the Williams Institute at UCLA School of Law; Jim Halloran, president of TwitterOpen; Jeffrey Klausner, MD, professor of medicine and public health in the UCLA Division of Infectious Diseases and Department of Epidemiology; Kelsey Louie, CEO of the Gay Men’s Health Crisis;  and moderator Mark Joseph Stern, writer, Slate.com. Organized by artist Jordan Eagles.

The FDA’s public comment period for the blood donor ban ends on November 25, 2016.