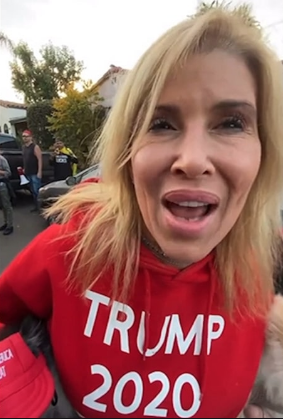 Gina Bisignano, the homophobic Beverly Hills salon owner who went viral in December for an on-camera tirade in which she used gay slurs and a lot of other very 2020 stuff, was indicted on 7 counts on Friday for her participation in the Trump insurrection at the U.S. Capitol, reports Towleroad.

Bisignano was identified in a video from the insurrection yelling through a megaphone: “Everybody, we need gas masks, we need weapons. We need strong, angry patriots to help our boys, they don’t want to leave. We need protection.”

TMZ reported on Bisignano’s lockdown protest back in December: “This woman, not wearing a mask, went on a homophobic rant while protesting outside the home of L.A. County Department of Public Health Director Barbara Ferrer. The video starts with the woman firing off a homophobic slur at the person recording her. She added Nazi and brainwashing accusations too…”