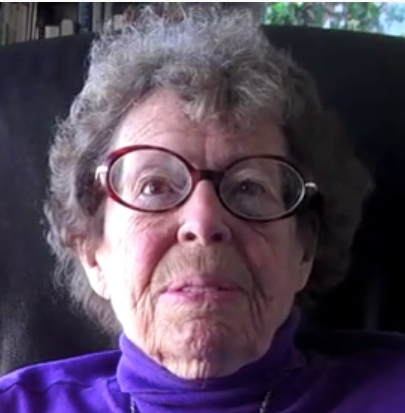 Today, the National Center for Lesbian Rights mourns the loss of a beloved friend and LGBTQ civil rights icon. Phyllis Lyon, 95, passed away peacefully from natural causes at her home in San Francisco.

Lyon, along with her wife Del Martin, was one of the nation’s first and most visible lesbian rights activists who dedicated her life to combating homophobia, sexism, violence, and racism. Phyllis’ contributions to the LGBTQ equality movement will be felt for many decades following her passing.

“Phyllis Lyon was a giant. She was an icon, a trailblazer, a pioneer, a role model, and a friend to the many of us who looked up to her,” said NCLR Executive Director Imani Rupert-Gordon. “Her activism changed what we thought was possible, and her strength inspired us. Her vision helped forge our path and made organizations like NCLR possible. And although the path is lonelier without her, we know the way because of her.”

In 2004, Lyon and Martin became the first same-sex couple to be married in the state of California, and subsequently became plaintiffs in the California marriage equality case, represented by NCLR, which helped to ensure that the fundamental right to marry under the California Constitution belongs to all individuals, including same-sex couples. Phyllis and Del were married in California by former NCLR Executive Director Kate Kendell on June 16, 2008, after 55 years together.

“Our country has lost a civil rights icon and one of the most legendary figures in the LGBTQ movement,” said NCLR Legal Director Shannon Minter. “I was proud to represent Phyllis Lyon and her longtime partner Del Martin in the historic 2008 California Supreme Court case that struck down California’s marriage ban. Getting to know Phyllis and Del was the honor of a lifetime. Our movement would not be possible without their unflinching courage and willingness to live openly and proudly as lesbians, even at a time when doing so subjected them to vicious stigma and persecution.”

Phyllis began her work in civil rights activism after she received a degree in journalism from the University of California at Berkeley in 1946. Shortly after graduating, Lyon met her partner Del and the two began working on behalf of lesbians in their community. Lyon and Martin both devoted their lives to working towards full LGBTQ equality, healthcare access, advocacy on behalf of battered women, and issues facing elderly Americans. Their many contributions over the past five decades helped shape the modern LGBTQ movement.

Lyon and Del are credited by the venerable Reverend Cecil Williams for helping shape an LGBTQ-inclusive vision for Glide Memorial Church in San Francisco – including programs that helped shelter and protect LGBTQ youth who sought refuge in San Francisco to avoid discrimination and persecution in their hometowns. The couple was also co-founders of the Daughter of Bilitis, the first political and social organization for Lesbian in the United States. In 1956, they launched “The Ladder,” the first lesbian newsletter, which became a lifeline for hundreds of women isolated and silenced by the restrictions of the era. Activists established Lyon-Martin Health Services named in honor of Phyllis and Del in 1979.

“Phyllis Lyon is truly an iconic figure in the history of LGBTQ and women’s rights. Her life was marked by courage and the tenacious belief that the world must and could change,” said Kate Kendell, former NCLR Executive Director. “She and her love of over 50 years moved from the shadows to the center of civil life and society when they became the first couple to marry in California after Prop 8 was struck down in 2008. Few individuals did more to advance women’s and LGBTQ rights than Phyllis Lyon. From the moment I started as Legal Director at NCLR, Phyllis and Del were fixtures in my life. Our monthly lunches gave me the chance to learn at their feet about my own history and the story of much or our movement. I got to be a part of not one but two weddings with them! First in 2004 and then in 2008. After Del’s death in August of 2008, I still had Phyllis in my life, even as dementia took a lot of her memory, she never lost her spirit, joy or sense of humor. I will miss her every day, but am comforted knowing she and Del are finally together again.”

The family requests that gifts in honor of Phyllis be made to the Lyon-Martin Health Clinic: https://www.gofundme.com/f/save-lyonmartin-amp-womens-community-clinic?utm_medium=copy_link&utm_source=customer&utm_campaign=p_lico+share-sheet

A celebration of life honoring Phyllis is being planned by the family.