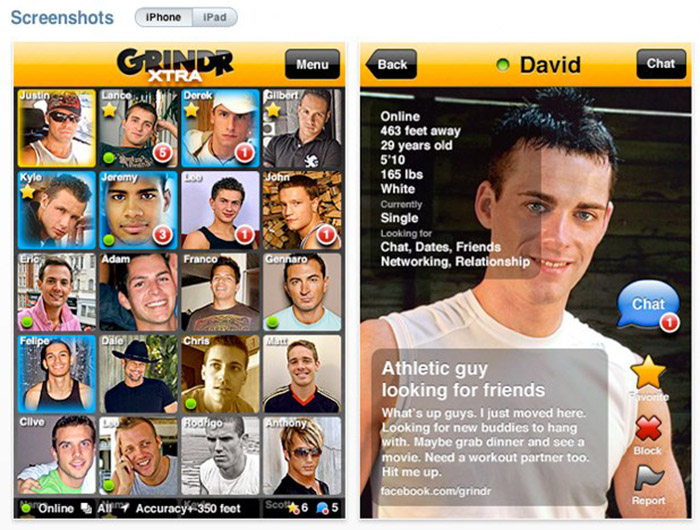 Confessions Of A Recovering Grindr Addict

We’re so used to the perpetuity of the hunt, we don’t have a clue what to do if and when we find what we’re looking for.

> True confession: I used to be a Grindr guy. You know the type, right? I had the requisite torso photo taken at the moment of peak summer beach body, the snarkily delicious tag line and profile text, and my stats listed at a very respectable 5 lbs beneath and 2 inches above my real weight and height.

Maybe I wanted a real connection, maybe I just wanted sex, or maybe I wanted a real connection by pretending I just wanted sex, but the behaviors are all the same. For a lot of us Grindr guys, it becomes a semi-addiction. Checking Grindr is this thing you just have to do whenever you’re in a gay bar or a new part of town or traveling because, who knows, maybe the only thing standing between you and that perfect guy is being on Grindr at the exact right moment so that you can connect and live happily ever after. But then again, it never really happens quite like that, now does it?

More likely than not, you become bitter and jaded. The perfectly normal bodies contained in those 3-inch squares no longer become enough when you’re expecting to see perfectly chiseled physiques that look like they just stepped off of a cover shoot for Men’s Health.

That semi-snarky but still cute profile text becomes just plain mean, and with abject horror one afternoon you realize that you’ve become the type of asshole that writes things like “if you think you shouldn’t be talking to me you probably shouldn’t be.”

After one awkward hookup that doesn’t amount to much, going to the bar in your local gayborhood becomes an embarrassing trip through your online sexual history. How many guys have seen that one perfect photo of your dick that you sent out with abandon during a “wild” period? How many have you slept with? Damn, there’s that asshole that never called back. Wow, there’s that guy that I never called back. And so on and so on. So when does it stop?

Looking for a great guy in a major metro city is like looking for the proverbial needle in the gaystack, but I remain optimistic that he’s out there. Maybe now that I’ve stopped spending so much time looking down at my iphone screen, I’ll be able to see him when he finally shows up.

Grindr provides an escape into a fantasy world in which that hot guy with the ripped torso could possibly be into you. You’ll meet up, fall in love, delete the app, lie to people about how you really met, and live your happily ever after. Unfortunately, it doesn’t work like that. Maybe you go out and the guy cannot stay off of Grindr for the duration of the meal. Maybe you do hook up and you hear that oh so familiar *ping* that means your guy has just gotten a message from yet another potential suitor during that point in time where it is physically impossible for you to be more connected to another person.

Why is this one little app with the creepy skull and crossbones-esque logo a source of such obsession in the lives of so many gay men?

Grindr addiction is not about sex addiction at all, really. It’s about the addiction to what is fresh and new and different, the ultimate technical accessory of that guy who scans the room for something more appealing while looking over his boyfriend’s shoulder. The very essence of the app speaks to the problem with most gay men, which is that we’re so used to the perpetuity of the hunt, we don’t have a clue what to do if and when we find what we’re looking for.

The real world of talking to and dating men is a scary place. It requires a thick skin to brush off rejection and thick latex to ward off infection. Looking for love is a lot harder than trading “sup’s” and “pics plz” in little blue and yellow bubbles while the rest of the world goes on around you.

Ultimately, I’d like a guy who wouldn’t be on Grindr. I’d like someone who’s comfortable enough in his skin to not reduce himself to a torso photo, and a guy who doesn’t feel like he’s missing out on anything by being disconnected from the virtual bathhouse of online hookup apps.

Looking for a great guy in a major metro city is like looking for the proverbial needle in the gaystack, but I remain optimistic that he’s out there. Maybe now that I’ve stopped spending so much time looking down at my iphone screen, I’ll be able to see him when he finally shows up.