Jacqueline Habhab on being newly sober again, life as a transgender woman and what’s it like coming out (twice) to a Muslim family from Des Moines, Iowa. 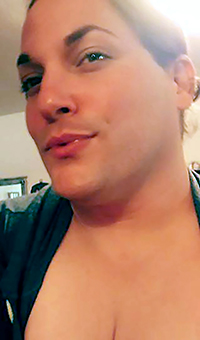 Coming back and getting sober again is overwhelming. I now identify as transgender. Coming from a family that’s Muslim in Des Moines, Iowa, you can only imagine the difficulties that I faced. It was hard coming out as a gay male in the early 90s, but coming out as transgender was completely different and my family is not accepting. They got over the gay thing, but not the transgender thing. They literally do not talk to me. It’s been difficult.”

“Before, I was this little Arab gay boy who kind of rested on my laurels of being cute and I was never fulfilled, so like my life was basically a lie. I always had a motive. I would meet all of these beautiful men who I thought wanted nothing to do with me, when in reality, I was a woman and I just never focused on that. I was always outwardly focusing on myself and what I could get. I would do drugs and drink and I never faced the fact that I am transgender…”

“I lost my job in Iowa when I came out as transgender. I started using drugs shortly after that. I had been sober for almost a year. I was becoming this new person and I had no idea how to deal with it. I wasn’t asking for help. I was only talking to my doctor and telling my therapist what I thought she needed to hear, so I could get my hormones. Along the way I realized that just because I was becoming a woman and becoming myself and I’m seemingly happy on a cellular level, I don’t get to be that same person. Everything has to be different.”

“Counting days again—that part doesn’t bother me. I feel more accepted. Surprisingly, I don’t feel judged. It’s so different not presenting myself as Jeremy and not wanting to basically have sex with everybody. All I knew how to do was to present my sex body to a gay man. So not having that motive has completely freed up a lot of shit, but at the same time there’s this big mess to deal with now. It’s very uncomfortable.”

“The change has been slow physically. I’m starting to see more effects after the hormones. Smoking meth and drinking has served me no purpose at all. My ultimate goal to become me is, I need to be diligent. I need to shit or get off the pot. I can’t say this is what I want to be and then drink and use. I can’t be high, homeless, prostituting, and trying to find housing—they said if you’re positive and transgender, they could get me housing, so I tested, figuring I have to be positive, because I have slept with every Tom, Dick, and Harry while high as a kite, but I’m negative. Then I was mad that I was negative and I think how disparaging is that? Life is funny.”

“Right now I’m in a shelter in Pasadena. I was in the hospital for two days because I couldn’t stay on the street. The first two nights I slept on a bus on a train and I couldn’t shave. It’s been hard, but emotionally, I’m happy today. I’m on the waiting list at the Van Ness Recovery House. I turned in a bottle of vodka and a bottle of Percocet and then two hours later of course, I was pissed off that I did that. But I made it through today. I have hope. I think I’m going to be okay.”