Final Fantasy XV: When the night has come and the land is dark and the moon is the only light we’ll see. 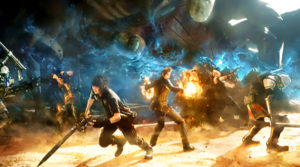 When you play Final Fantasy XV there is no hand holding. There is no explanation of the relationships prior to the beginning of the game unless you watch Kingsglaive. Even then, you have your four friends/bodyguards comforting you, joking with you, fighting beside you, and more importantly growing with you.

Sure, it has its awkward moments, some cheesy voice acting, couple of graphical hiccups here and there. But the one thing that is constant throughout the game, is the sense of wonder and quirkiness that IS Final Fantasy.

FFXV has been in development hell for the past 10 years. Switching directors, designers, crews, etc. many people believed that such a title would never see the light of day. Tesuya Nomura remained at the forefront and guided the teams whenever he had a chance but it was still a long painstaking process. However, the wait and changing titles and dates have been worth it. Oh so so worth it.

The music that you play on the stereo are classic Final Fantasy tunes from the entire series. You can rent and customize or race your chocobos. You have four friends, warriors of light that are fighting to reclaim their throne or the divine crystal that protects the lands from shadows and dark forces. But the most phenomenal thing about the game is the battle system and characters who stand by your side. A testament to it’s fans who have stood by through Square Enix’s growing pains with FFXIII and FFXIV online before it was tweaked and remade.

The battle system causes you to think quickly and to manage your MP to prevent stasis. You can do combo attacks with any of the four characters. You can warp by hitting the triangle button to higher grounds to avoid sweeping majestic attacks from giant monsters. But the coolest aspect of the battle system is the fluidity of bond and movement when the characters interact with one another. They get tired, they get frustrated, they get hungry and need provisions and amities. They open up about small details as you travel the diverse world together. For a game built on story and character driven prowess, this is where Final Fantasy XV shows why it is relevant and a genius in its own class.

The summons. Omg. The summons are awe-inspiring, wonderful, and epic. It feels as if you are seeing an actual ethereal being fighting by your side. Almost like a miracle that only you have seen. The sad thing is that the summons happen rarely. Whenever your character is down and low on hp does he use his last trump card to end the fight and annihilate the enemy and all surrounding  areas. Either way, it makes it worth it when it happens. And there are some throwbacks and clever reimagining of classic guardian forces. I won’t say what they are. But you will see a winter woman filled ice destroy in style.

One of the coolest moments while playing the title is a heartfelt scene with Noctis and Prompto. I won’t say what it is, but it is a endearing and human scene that unravels with these two characters and shows that square really knows how to play with your heart. This but a taste of many more moments with the boys. You begin to notice details like Ignis who wears his glasses but his eyesight isn’t that bad. Gladiolus loves to read in the car while traveling. Prompto loves selfies and tries to photo log every damn thing he sees. Such charms and personality traits really shine in these unsaid moments and allows for you to love these characters even more and have a wantingness to spend more time with them

I can’t help but think of the similarities of what has happened with the recent election. Many people felt defeated and devastated. How would we ever stand against the ugliness that reared its ugly head within our own country. To reclaim the values and variety that make America, you are reclaiming your rightful place in society. Just like Noctis and company, you are reclaiming your throne.