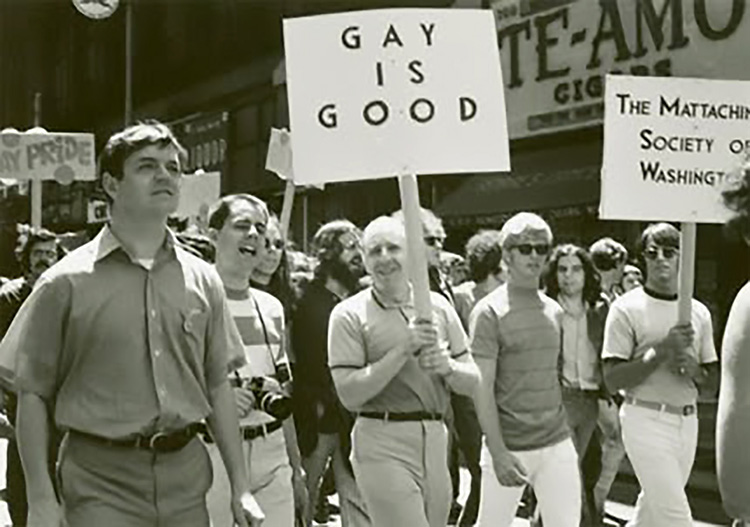 One of the earliest gay rights organizations in the United States, headquartered first in Los Angeles.

The Mattachine Society, founded in 1950, was one of the earliest gay rights organizations in the United States. Harry Hay and a group of Los Angeles male friends formed the group to protect and improve the rights of gay men.

The Mattachine Society existed as a single national organization headquartered first in Los Angeles and then, beginning around 1956, in San Francisco. Outside of Los Angeles and San Francisco, chapters were established in New York, Washington, D.C., Chicago, and other locales. Due to internal disagreements, the national organization disbanded in 1961.

The primary goals of the society were to:

“Unify homosexuals isolated from their own kind;”

“Educate homosexuals and heterosexuals toward an ethical homosexual culture paralleling the cultures of the Negro, Mexican and Jewish peoples;”

“Lead the more socially conscious homosexual to provide leadership to the whole mass of social variants;” and “Assist gays who are victimized daily as a result of oppression.”

The Mattachine Society founder, Harry Hay, took a stand against the assimilationism advocated by the majority of gay rights campaigners at the time. He subsequently became a co-founder of the Los Angeles chapter of the Gay Liberation Front in 1969, although in 1970 moved to New Mexico with his longtime partner John Burnside. Hay’s ongoing interest in Native American spirituality led the couple to co-found the Radical Faeries in 1979 with Don Kilhefner and Mitchell L. Walker. Returning to Los Angeles, Hay remained involved in an array of activist causes throughout his life, and became a well-known elder statesman within the country’s gay community.

Hay has been described as “the father of gay liberation.”