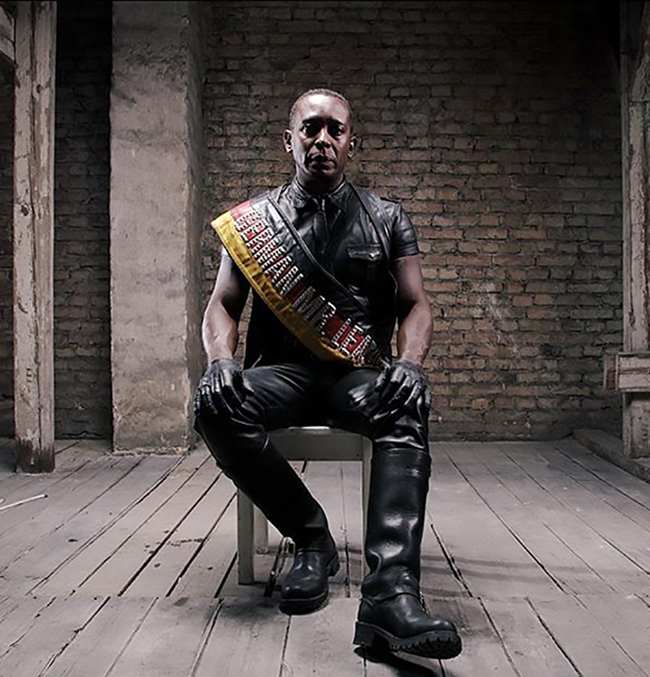 THE OPPOSITE OF SEX

Tyrone Rontganger, German Mr. Leather 2013/14, and a judge at the recent Mr. L.A. Leather 2015 contest, on the differences between leather bars in Berlin and Los Angeles.

One of the biggest surprises I had during my visit to Los Angeles was on my first night out there for Eric Paul Leue’s [Mr. L.A. Leather 2014] roast at the Bullet Bar, the kind of leather bar you can find all over the world.

A long bar with dark walls, sexy guys serving beer, stools to sit on from where you chat with the staff, pounce on a passer-by, or whiskey-drink your man-size problems into oblivion. Nothing particularly unusual! Order a drink from the bar there and you could also be in a leather bar in any European city between London and Berlin. I order my vodka-cola and take it onto the terrace where I can quietly enjoy it outside. And that’s where I had my big shock: WOMEN. In a gay leather bar. I honestly thought I’d drop my drink.

This trip to Los Angeles for Leather Pride was my first “leather holiday” in the US, therefore also my first time in an American leather bar and consequently also the first time I had ever been in a leather bar where I had encountered members of the opposite sex.

As a European, it just didn’t make any sense to me at all: In Europe, or Germany at least, and it doesn’t matter where, there are no leather bars where women can enter. The same goes for the associations, night clubs, anything. We completely segregate: Men over here, women over there!

Jon [Wright] from the LALC [Los Angeles Leather Coalition] explained to me that in the US, it’s to do with laws on discrimination so it’s illegal in California to put a sign on the door that says “No Women!” The disparity between California and Berlin made me wonder: is gender segregation a benefit or an injustice?

That night at The Bullet I went looking for the darkroom, as in my European mentality there had to be one somewhere. Eventually I ask Eric Paul Leue where it is.

“Welcome to LA, honey!” Eric (German born) says to me. “This is not Berlin. We don’t have darkrooms here!” Then all of a sudden, it at least makes some sense to me: If you’re going to admit women into a bar, then you’d in theory have to also let them enter the darkroom.

How do our homosexual sisters see it? My friend Annet Audehm, a frontline lesbian and probably the most prominent LGBT activist in Berlin offers me her opinion. “I don’t have any problem at all with not getting into certain places,” she says. “We have our own places, exclusively for women—lesbian women! No men allowed!”

Mari, a counselor in Berlin for LGBTQ youth: confirms this: “We have women’s bars here in Berlin where nothing with a penis can enter, not even on dogs, nor children over the age of six. Why would I feel discriminated against because I can’t get into a men’s bar that I don’t even want to go to? Men can’t get into our bars either!”

It’s clearly a two-way street here. We men don’t want the women in our bars and the women here neither care nor want it in return, regardless whether their female colleagues in America think they should or not. It is as normal for them to live here in a female dominated lesbian world as it is for us to live here in a male dominated gay one. Yet we live in the same city, side by side and share the same issues, without having an issue with each other on this particular theme.

Perhaps it really is the heteros here who have it the best. If you’re a straight woman who also likes to have indiscriminate sex in public, you can still visit the heterosexual darkroom in Berghain, the mixed sex parties at Club Culture House, or one of the many “swinger” clubs. Or go dancing in the Kitkat Club, where you can walk around naked, get fucked at the bar or hit the dance floor wearing a strap-on dildo. I guarantee you in all cases the straight men will line up for you. The straight bars and clubs seem to be the only places in Berlin where men and women can actually meet and have sex. With each other.