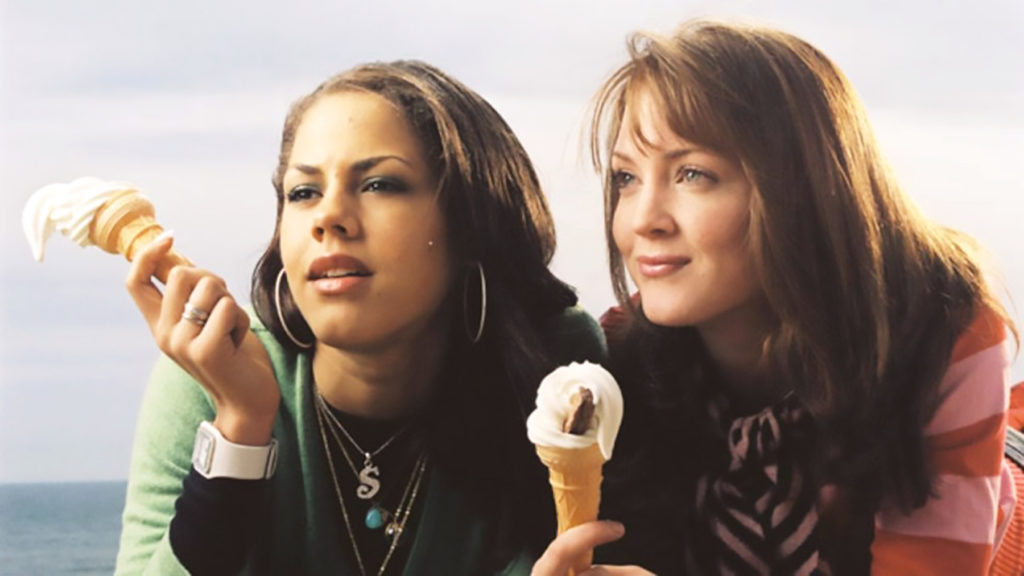 …Sugar Rush… is an age-old story of unrequited love; a classic tale of lust and yearning transposed into a queer, lipgloss-sticky register.”

Hello dear FIGHT readers. I’m writing from vacation in Scotland, and somehow my computer is aware of my location. In searching for interesting GLBT news tidbits, one of the first headlines I encountered read: “Lesbian who romped with girl, 14, exposed by film of them having sex.” Wha…? Where are my legal headlines? Where is news of the antigay brief from the Trump Justice Department in the Second Circuit’s Title VII case? What’s the status of the Texas bathroom bill? For heaven’s sake! Why should any of us care about the sexcapades of 19-year-old Indianna Northcott from Torquay in Devon?

A sidebar on the Daily Star story about Miss Northcott reports: “Naked News presenter Jenny Scordamaglia gets whipped in X-rated….” I’d have to click on that to find out what happened and/or why Jenny was naked, and I do have a little dignity.

But just a little. It turned out that Jenny got whipped in an X-rated “fetish display,” the story continued. Apparently Naked News is an American thing and Jenny went to a “submission” presentation at a Miami party and allowed several party goers to “whip her behind.” Jenny later said it felt like a “butt massage.” You know what readers? I’ve seen kinkier things walking my dog in San Francisco. Is this really the best you can do? The story also claims that the Naked News channel presenters “have set the Internet alight with their saucy, full frontal antics.” I don’t think so.

For the record, have any of you women out there ever heard of the U.K. television show Sugar Rush? The show is being re-aired for some Pride thing, and one of the articles foisted upon me by U.K. Google says this:

“Over a decade on, Sugar Rush, adapted from Julie Burchill’s novel of the same name, is still compelling and raw, funny and heartbreaking. At its beating, neon heart is an age-old story of unrequited love; a classic tale of lust and yearning transposed into a queer, lipgloss-sticky register.”

I want to see it!

My wife just informed me that Trump’s support among African Americans is down to about one percent, which makes her wonder: who the heck is that Black guy who’s always front and center at all Trump rallies?

According to New York Magazine, the man is, Michael Symonette, a radical anti-Obama nut case who calls himself “Michael the Black Man,” and has rallied for Rick Santorum and won a seal of approval from Glenn Beck. He is a former member of the Black Supremacist Yahweh ben Yahweh cult but now runs a website at gods2.com which transcends cult-dom with pure lunacy like:

“Republican Senators blocking Trump are Cherokees & Mormons & are infiltraters in the Rep. Senate like McCain to block Trump & Muller are coming down with Great Wrath because their wicked time to block good policy is short, Rev.12:10 & Dan.8:25!”

And he also sells “Blacks for Trump” T-shirts.

It’s pretty obvious that Trump and company have given this crazy person free rein to position himself right behind the President at any and all of his public functions. You would think the Secret Service would have something to say about this, but it seems they’ve given Michael the all clear sign.

I believe I mentioned last month that Lambda Legal Defense will petition the High Court to review a case of antigay job discrimination against a Georgia hospital employee. The case will determine whether or not gays and lesbians are protected against bias in the workplace (Title VII) and in public schools (Title IX) under current federal laws that ban sex discrimination. In other words, the case asks whether or not “sex” discrimination encompasses “sexual orientation” discrimination.

Now we have a similar Title VII case that is poised to be reviewed by the full U.S. Court of Appeals for the Second Circuit. On the last possible day, the U.S. Department of Justice filed a brief in that case, telling the court that the government believes that Title VII does not cover gays and lesbians and should not be interpreted to that end. This position is a 180 degree reversal from the Justice Department’s position under President Obama. Indeed, Obama’s Justice Department went even further, holding that sexual orientation comprises a protected class under constitutional law.

Well, we’re not really surprised now are we? Loretta Lynch is gone. Jeff Sessions runs the department. Obama is no longer president. Now we have Trump.

And by the way, it’s very unusual for the Justice Department to produce a brief in a case that does not involve the government. The case in question was filed by a sky diving instructor many years ago, a man who has since been killed in a BASE jumping accident in Switzerland. Not that any of those details matter to the case, but they’re interesting in a morbid kind of way.

The bottom line is that presumably, the Supreme Court will hear Lambda’s Title VII out of the Eleventh Circuit next session. It’s also possible that the justices will wait until the full Second Circuit hears the sky diver case next year.

The Australians are up to their tricks again, tying themselves into knots in order to legalize marriage equality in the most convoluted and time consuming manner possible. Now, after several months of pointless legislative walkabouts, Prime Minister Malcolm Turnbull announced that the Australian Bureau of Statistics will conduct a non-binding public survey of registered voters via the postal service.

The $122 million plebiscite will serve no purpose other than to quantify the sentiments of a particular subset of the Australian populace—perhaps one that is weighted towards older voters who are more likely to be registered, to live at the same address, and to send back their vote. Whether or not this will reflect recent poll numbers indicating roughly 57 percent of Australians support marriage equality is anyone’s guess. If it doesn’t, if the mail vote were to go against marriage, well I think Australians can bid equality goodbye for another decade.

Even if marriage wins, lawmakers will still have to pass something if same-sex couples down under are going to wed. Meanwhile, some pundits note that the needlessly controversial postal vote may have a side effect; it’s possible progressive young citizens will register to vote, toppling conservatives in close races in the next election.

Before I go, I just stumbled on a clip out of Jeddah, Saudi Arabia, where a 14-year-old boy named Ahmed Al Omran has been arrested for performing the Macarena at a busy intersection dressed in western clothes. Ahmed was charged with disrupting traffic, but we all know what his real offense was: acting gay in a hard right conservative country run by religious fanatics.