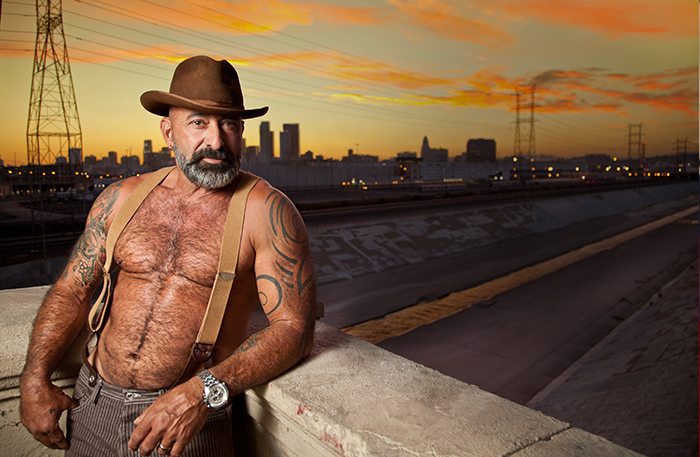 Gordon began his career in the Los Angeles punk rock scenes of the late ‘70s and ‘80s, cutting hair and doing makeup on the patios of local night clubs, using his extensive art background to create unique looks that would herald the transition from disco to new wave.

While working at one of LA’s first punk rock salons, Gordon was invited to join avant garde designer Nicola Pelly and Harry Parness to create some of the looks for their fashion shows at the trailblazing Parachute in Beverly Hills.

When I married my husband we decided we would make up our
own rules and figure out what’s right for us… We realized that as a same sex couple we didn’t have to live under heterosexist ideals.”

Since then, Gordon has continued to work in fashion and advertising, bringing his unique take on pop culture and old Hollywood glamor to film and television. He has worked with such greats as David La Chapelle, Peter Arnell, and John Landis. His work can be seen on billboards from Times Square to Hollywood, and on the pages of Cosmo UK, Flaunt, Rolling Stone, Moda FG, and Angeleno—to name just a few.

“Makeup keeps me constantly on my toes, it’s kind of like being Macgyver… Everyday is something different—and so much of the time it’s creating things last minute, I love that!” reveals Gordon in an interview with THE FIGHT.

A native Angeleno, Gordon knew from an early age he would work in a creative field. “I remember at school, at graduation, after winning the art award, I kept on thinking of a way to do my art—but I was terrified at the prospect of being a starving artist,” reveals Gordon.

“All the men in my family worked in the movie industry, some behind the camera, some in front. I knew I would end up working in that industry… So I started in sound—assisting my dad, and then quickly moved on to the hair department, then body makeup and now—makeup.”

Over the years Gordon says that he feels “blessed to have worked in every aspect of my industry. From runway fashion to celebrity red carpet grooming, to feature films, TV and commercials to print ads and beauty and fashion stories for publications… it continues to be an amazing adventure!”

At the moment, reveals Gordon, he is gearing up to start working as key makeup artist on new series called Unsolved: The Murders of Tupac and the Notorious B.I.G. The scripted true-crime drama, which chronicles the two major police investigations into the murders of Tupac Shakur and Christopher Wallace aka The Notorious B.I.G., is slated to air in the first quarter of 2018 on USA Network.

On a personal note, Gordon, who is currently in a polyamorous relationship, says he feel lucky to live his truth, free from heteronormative models. “As part of the LGBTQ community—it’s up to each and everyone of us to decide what’s right for us,” he says. “When I married my husband we decided we would make up our own rules and figure out what’s right for us… We realized that as a same sex couple we didn’t have to live under heterosexist ideals—nobody has to live in our skins except us… it’s my hope everyone finds their truth and what works for them and they have the courage to live their lives as they see fit.”