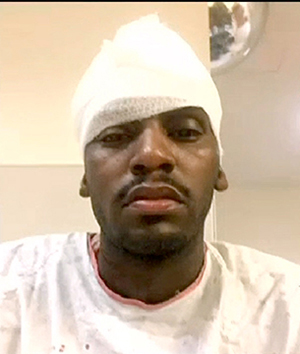 Sheriff’s deputies are seeking leads on three men who attacked a young gay male as he walked home on Santa Monica Boulevard and Fairfax Avenue in West Hollywood, on Tuesday, January 20.

CBS2 News reports that the victim, Don Brooks, 31, was walking home alone, after commemorating Martin Luther King Jr. Day with friends when three men pulled up in a car, shouted gay and racial slurs at him and then jumped out of their vehicle and attacked him. Brooks said that when he got up he was covered in blood. He was taken to Cedars-Sinai Medical Center for treatment and released shortly after. Brooks was unable to identify his attackers and only remembers that they were Hispanic. Anyone with information is asked to contact deputies at (310) 855-8850. 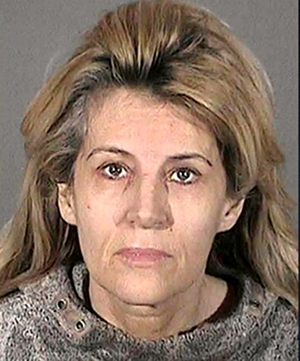 West Hollywood skin care beautician Dawn Melody DaLuise was acquitted last month of charges alleging she solicited the murder of a rival gay business owner. According to authorities, there was no evidence that anyone acted to carry out an attack on Gabriel Suarez, who had opened a competing skin care business, Smooth Cheeks, near her Skin Refinery salon at 8543 Santa Monica Blvd. in West Hollywood. 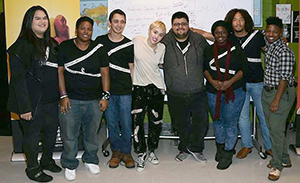 The Los Angeles LGBT Center welcomed singer and activist Miley Cyrus to the Center last month for a tour of the LA LGBT Center’s Youth Center with CEO Lorri L. Jean. Cyrus met with a group of homeless LGBT youth who make up more than 1,100 homeless youth who are helped by the Center each year. She joined one of the Center’s Smart sessions, which is part of the Center’s comprehensive programs that help LGBT youth transition from being homeless to self-sufficient. 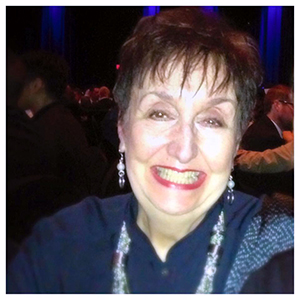 MOURNING THE LOSS OF MADAME MICKY’S

WeHo residents are mourning the recent loss of WeHo Gay Icon and long-time Micky’s nightclub manager, Mary Ann McClintock, who passed away last month. WEHOville reports that McClintock had been in poor health since she was treated for a brain aneurism back in November, 2013. McClintock worked at the popular gay bar for 25 years. Back in the 90s, young gay men called her “Madame Micky’s.” She would later be dubbed as “The woman behind all the men.” 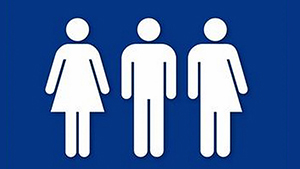 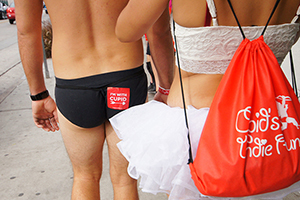 Men and women of all shapes and sizes dare to bare their unmentionables-all in the name of charity at the annual Cupid’s Undie Run on Valentine’s Day weekend.  Everyone is encouraged to put some hilarity in charity with hundreds of half-naked runners taking to the streets in celebration of their fundraising for the Children’s Tumor Foundation. It all starts at The Abbey in West Hollywood on February 14 at 12pm. For information on how to start a team, join a team or just run solo, visit: cupidsundierun.com/city/los-angeles.