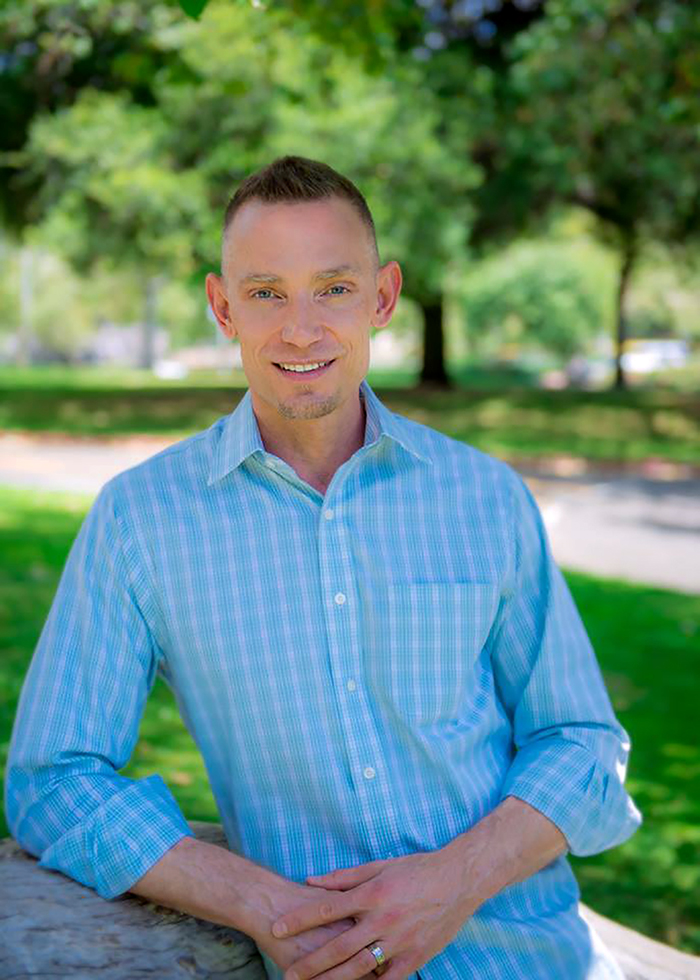 Former International Mr. Leather Mike Gerle has announced his candidacy for West Hollywood City Council in the March 2015 election. Core values, the Mormon Church and taking leadership in the fight against AIDS.

“Legacy, experience and vision; that’s what I want to build on,” says the 49-year old Gerle (pronounced “girly”) in an interview with THE FIGHT.

“West Hollywood is a city that was founded on renters’ rights, LGBT rights and seniors’ rights. Not many cities can say they’re going to create themselves on those ideas, but we did and it worked. We have core values—idealism, creativity and innovation -that we’re getting away from. I feel like we’re taking the easy way out more and more—we’re afraid to be innovative, we’re afraid to be courageous . . . We should be measuring what we are doing now and in the future on those same core values we started with.”

Gerle worries the city is losing what makes it unique and becoming too much like any other city in Southern California.

“Becoming more and more like Orange County (CA) is not progress in my book,” he says. “West Hollywood has always set a higher standard for itself. We don’t need to sell out because we can get more money.”

Those core values and the freedom to be gay are what influenced Gerle to relocate to WeHo.

“Individuality is the standard here in West Hollywood,” Gerle says, “but it certainly wasn’t where I was growing up.”

With his father working for the Union Pacific Railroad, Gerle lived in Nebraska, Wyoming and Idaho as a child, where his goal was just to fit in. His family joined the Mormon Church when he was 11. At first, he enjoyed the church and the structure it brought to his life. But once he hit puberty and recognized his attraction to boys, his love affair with the church was over.

“I loved the church and the idea of God that we had back then,” reveals Gerle. “But then I was told that homosexuality was even worse than murder in the eyes of the Mormon Church. With murder you kill a person, but by not having kids, you’re preventing all these other lives from being born. So, I had to completely reinvent my paradigm of the world.”

He had dreams of being a professional ballet dancer and even got a scholarship to study ballet in San Diego. However, an AIDS diagnosis and drug addiction derailed those plans. Moving to West Hollywood, getting sober and hitting the gym changed his life.

Gerle praises West Hollwood’s early action on dealing with AIDS at a time when the federal government was doing little, saying “we were on the cutting edge of compassion, conversation and care for those infected and affected by the disease.”

However, now he feels the city needs to again take leadership in the fight against AIDS and “modernize” its relationship to the disease.

Approximately 2,400 people living in West Hollywood have HIV/AIDS according to a recent survey.

“We need to be having conversations about what ‘undetectable’ means, what PrEP can do, treatment as prevention, and the grey areas of sexual activities so that people can make more informed choices regarding their sex lives,” says Gerle, who

married his partner, Garrett McClure, a vice president at a digital media company, in March 2014 (the two met three years ago on an AIDS LifeCycle training ride).

“I strongly believe that if we retool our efforts, this can be the last HIV generation.”

When it comes to sobriety, he also praises the city’s commitment to 12-step recovery programs like Alcoholic Anonymous by proving meeting space in the Werle Building, adjacent to West Hollywood Park. But he wants to see that commitment made permanent.

“Rather than make ad hoc decisions that lurch from year to year, I would like the city to recognize that the recovery culture is just as much a part of West Hollywood as the night club culture,” says Gerle, who has 22 years of sobriety.

The International Mr. Leather 2007 title came about as a fluke, reveals Gerle. He had been a regular at Oil Can Harry’s bar in Studio City and wanted to get more involved with the leather community, but had never participated in a leather contest before.

“I wanted to dive deeper into the leather scene, but didn’t know how to get into it. I’d sort of been on the sidelines, but I thought if I entered that contest and got some notoriety, I would get noticed,” he recalls.

Gerle won the Oil Can Harry’s Leather competition—and went on to win the title of Mr. L.A. Leather—and then won the top honor and became International Mr. Leather 2007.

Gerle believes his experiences in the leather community will be helpful for dealing with issues of diversity and inclusion in West Hollywood.

“The leather community isn’t all gay; it has straight people in it too. It’s also got a high visibility of transgender people. It’s just incredibly diverse,” he says. “The issue is how to embrace diversity—but not let it destroy us. I think that fits really well into West Hollywood politics… At the end of my winning speech [at International Mr. Leather], I said, “We don’t have to like each other, we just have to love each other. And if you think about it, you probably already do.”

One of Gerle’s primary goals will be creating more programming for the gay community, noting that the city’s gay population is steadily getting older. He’s already got a good start on that, serving as the facilitator for the city’s monthly gay men’s discussion group, TRIBE, which he founded in 2011.

“There wasn’t a single West Hollywood facility being used for gay men’s programming on a regular basis,” he recalls. “We outsourced that. We give a lot of money to the LA Gay and Lesbian Center and stuff happens just outside the West Hollywood borders that we pay for. But inside the borders, there wasn’t anything happening. I asked [Councilmember John] D’Amico about it and said at the least we could have a discussion group. Three years later, TRIBE is still going strong, getting anywhere from 25 to 50 men each month.”

One Call to City Hall

Gerle also wants to make City Hall more responsive to the residents. He wants to see the city set up a method for residents to make comments on matters before the City Council and its various  commissions via mobile phones.

He also dreams of creating a “One Call to City Hall” system where the person who answers the phone also answers your question, rather than transferring you to various departments.

“Everyone should only have to know one number to call city hall—311,” says Gerle, who currently works as a special events coordinator, but previously worked in the finance and information technology departments, as well as six years as an assistant to city manager Paul Arevalo.

“When that happens—the call volume goes up—residents will know that if they call, people will answer. If we have a leaf blower problem, it can be dealt with quickly. If there is a public safety issue, it would be addressed immediately.”

Ironically, if Gerle wins the election, he’ll be out of a job. City regulations prohibit him from being a city employee and also serving on the City Council.

“My husband and I discussed [losing his job] while deciding to run. We can certainly get by with only one income, but when that time comes, I will see what options are available.”