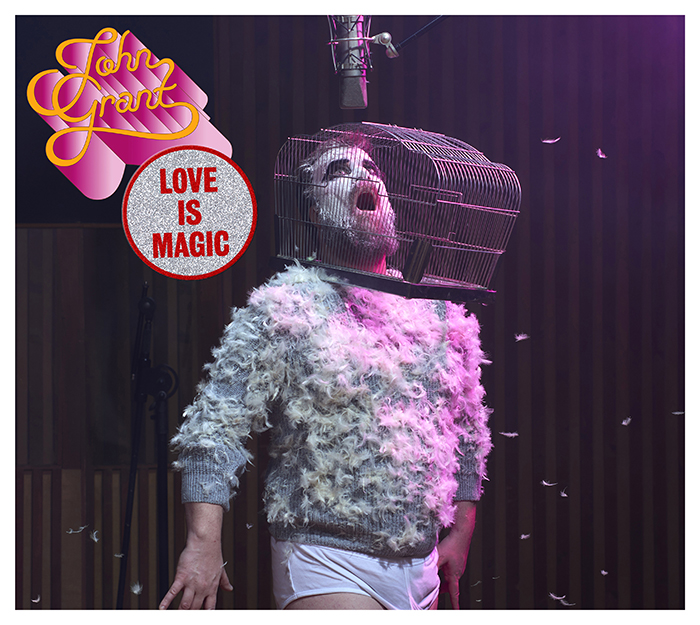 The first time I heard John Grant’s voice on a song called Marz on his debut album back in 2010, I literally had goosebumps and a warm tingle enveloping my entire body.

I was floored by how painfully gorgeous the song was, and how much Grant’s deep but delicate voice connected with me. I soon learned he was an openly gay man (and a big, strapping handsome bear to boot), and I’ve been a fanboy ever since.

As a recovering addict and an openly HIV positive artist, Grant has quite a well to draw from…”

Through three albums, he’s always toyed with blending grand, romantic melodies and acoustic sounds with subtle electronics. For his fourth effort, he’s dipping his toes much more in the kaleidoscopic synth pool, finding equal inspiration in quirky vintage legends like Kraftwerk, Devo, and Pink Floyd. And I have to say: many of his lyrics here are just as crazy as the image he chose for the cover art.

As a recovering addict and an openly HIV positive artist as well, Grant has quite a well to draw from: despair, recondite and sardonic wit, sly gay self-expression, and even a condemnation of vacuous ex-lovers on the robosexual Diet Gum. I won’t tell you who the scathing Smug C*nt is about, but let’s just say he has orange skin, hideous hair, and tiny pussy-grabbing hands.

Even as he hurl obscenities, he still keeps his diatribes clever. Grant might appear to be a bizarre, enigmatic and possibly absurd artist to any new listener; for my ears though, those three adjectives—and yes, that glorious voice—are what always keep me hooked.