Identical Twins Came Out As Trans And Transitioned Together. WATCH! | The Fight Magazine 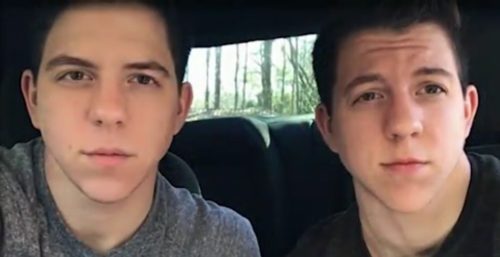 Twins who transitioned together are telling their story to help others, reports LGBTQ Nation.

Jace and Jack Grafe, 23, are inseparable twins from Georgia who do everything together. They have the same friends, the same interests, and they are both working as corrections officers.

They even started hormone therapy at the same time.

But it wasn’t until Jace and Jack were 14 that they had even heard the word “transgender.” Both were assigned female at birth but knew that they were boys.

“It’s like being in prison except it’s in your own body,” Jack told Fox 5. “And the older I got, the harder it was to swallow. And I was like, can’t do this for the rest of my life, I just can’t do it.”