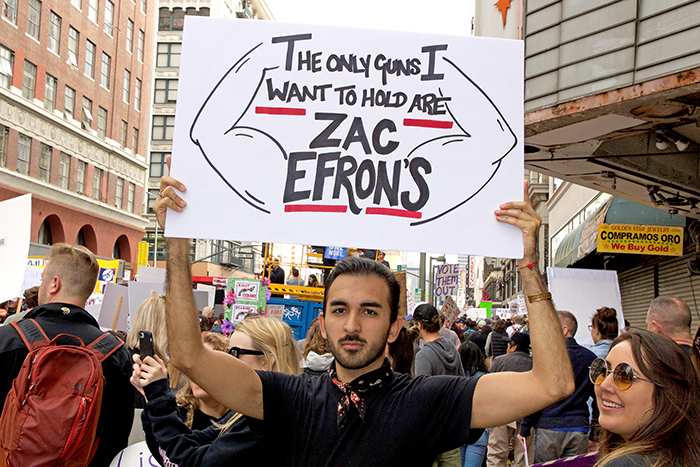 Supporting March For Our Lives

Tens of thousands of people gathered in Downtown Los Angeles for the March for Our Lives demonstration to call to action an end to gun violence. Among the thousands in attendance were members from the LGBT community who let their presence known with rainbow flags and sassy gay signage. “NRA Can Sashay Away,” one sign read. “The Only Guns I Want to Hold are Zac Efron’s,” read another held by a gay male protestor.

The Los Angeles chapter of Gays Against Guns convened at Pershing Square and marched to city hall. Gays Against Guns are an action group of LGBTQ people and their allies committed to nonviolently breaking the gun industry’s chain of death—investors, manufacturers, the NRA and politicians who block safer gun laws.

According to a CSW press release, #JUSTBE is more than just a theme. It’s a bigger story that will permeate every element of this year’s Pride festivities – from the Festival to the Parade (returning to its home on Santa Monica Boulevard this year) to the many week-long community events that CSW is busy planning.

The city of Long Beach lost a gay landmark when Paradise Bar and Restaurant closed permanently late last month after serving the LGBT community for over 30 years. The space located on the section of the Broadway Corridor in the heart of the Alamitos Beach neighborhood held farewell celebrations on March 16 and 17. It officially closed on Tuesday, March 20.

RuPaul Gets Star On Hollywood Walk Of Fame

Since 2009, RuPaul has produced and hosted the reality competition series RuPaul’s Drag Race.

San Diego Democratic Senator Toni Atkins, 55, has made history by becoming the first woman and first lesbian to become California Senate Leader. Atkins is taking over the post of Senate president pro tempore after serving as Speaker of the California State Assembly. She also represents the 39th district, encompassing most of San Diego. Aside from running the senate, she will focus on developing a process to deal with sexual harassment allegations. She has been a driving force behind a successful push to raise money for subsidized housing by charging $75 for many real-estate transactions. Atkins, who advanced groundbreaking legislation on health care, LGBT rights and housing. She is described by her colleagues as kind, measured and compassionate but steadfast in her commitment to fighting for people and ideas she believes in.