The Color Of Kink | The Fight Magazine 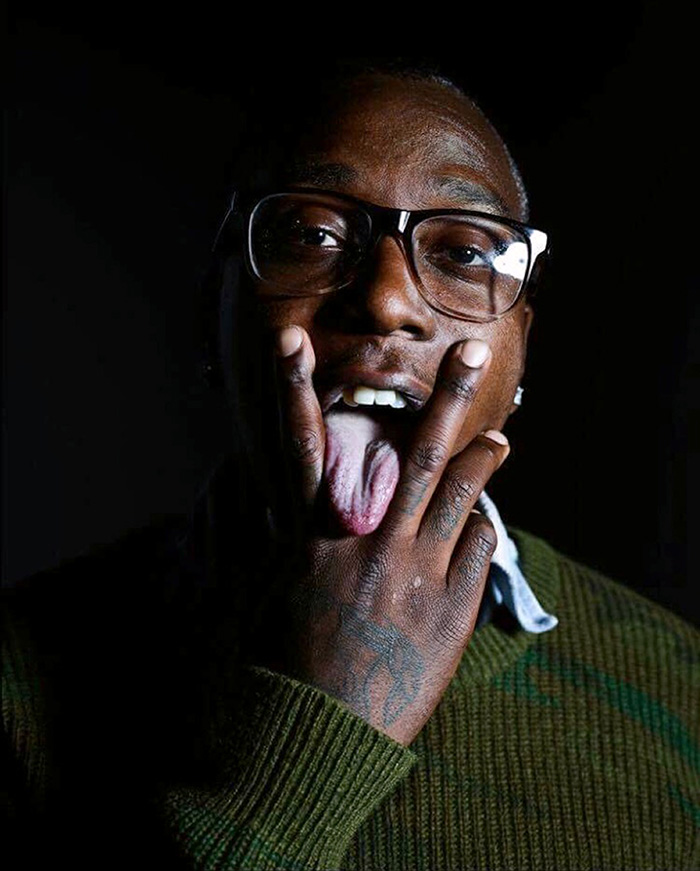 Take a minority (say, for instance, gay blacks in San Francisco) and cross section it with another (alternative sex scene people) and well—you get an even bigger minority.

My first Folsom Street Fair happened about 15 years ago. I arrived at the Golden State plucky, wide eyed, innocent, with as much promise of being corrupted as any cock hungry 19 year old with an absent father and a crushing need to be liked.

I donned a pair of booty shorts and roller skates (like Roller Girl from Boogie Nights) and high tailed it to the street fair—that shit was such a mistake.

I had remembered sometime in my teens seeing FSF on an episode of Real Sex and when I got there it was like that episode but like in real time 3-D. I saw a plump dentist in a dog collar being spanked by an even plumper woman in front of what I assume were their kids in a stroller  (Actually was he a dentist? He seemed like a dentist…) .

In my head I was like “why do you care what the white girls think?” But upon thinking about it—it was clear—“oh, cause they’re like fucking everywhere.”

People getting spanked, tossed, sucked, fucked, etc. I thought that someone was gonna molest me but no such luck… In fact I think I was pissing everyone off with my attire, “Ew—she’s wearing roller skates!” hissed  this one queen who actually had the fucking nerve to push me. I had half a nerve to rip off my skates and beat that bitch’s ass but then I noticed that I was the only black person for like hella yards and I paused—it’s always a gamble when you beat up some 40 year old gay white dude—they always wanna call the police and shit and I really wasn’t trying to do all that on my day off. With a burning hate I skated away.

By now you should guess that subject of this article is “my feelings on being a black gay at Folsom”—and they are MANY—but first things first.

I’m from Alabama originally and never really had any idea of me being a minority in America until that faithful move to California—I noticed that West of the Mississippi the less black this country got.

I settled in Oakland and made daily pilgrimages to SF ( this was the 2000s mind you- waaaaaaaaay back when Oakland still fucked with SF) and noticed that a Chocolate City it was not… I got here as the last black gay bar in the Castro closed and that was that.

Now you take a minority (say, for instance, gay blacks in SF) and cross section it with another (alternative sex scene people) and well—you get an even bigger minority. I mean sad—sure—but not something I really cried myself to sleep about.

Right about the time of my sexual awaking I was getting fucked by all the black and Latino daddies in East Oakland who cat called me from their cars. My dance card was fulllllllll, hunty, so I didn’t really sweat the Folsom Fair at all but NATURALLY right about the time Facebook started happening I would see all these maudlin ass articles by Latino/Asian/ black boys decrying the fact that the dominate gay white populace was showing them no love.

In my head I was like “why do you care what the white girls think?” But upon thinking about it—it was clear- “oh, cause they’re like fucking everywhere.”

Folsom is certainly no exception. The omnipresent gaze of whiteness can be seen all over every inch of gay life—it can get to be a little crushing and unavoidable—that feeling of not being centered is tantamount to feeling erased. White supremacy benefits all white people—not just the ones carrying torches. In the current climate where Nazis can roam the streets with machine guns, cops kill black and brown people with hardly a slap on the wrist and 50% of America voted for Trump—something as superficial as not getting a date should hardly rate in the hierarchy of “needs.” Yet still, it’s a bit irritating to think that systemic racism can even rear its ugly head in one’s dating life- and a crying fucking shame that sex is still the one realm where you can still flash a “WHITES ONLY” sign and it’s perfectly acceptable.

Then there’s the complete other side of this fuckery….

One Folsom I happened to meet a handsome middle aged white dude from the East Coast. My band was playing shows that next week near where he lived and I decided to meet up with him for a romp in New Jersey. What he failed to tell me was the particular brand of sex he liked to get into involved a fair amount of “race play” (one should really earn a bitch before that happens.) Now I’m not a complete square- I don’t mind a white boy dropping a couple of N- Bombs during sex as long as: a) he whispers it lovingly; b) he pays off my student loans; c) buys me a washing machine; and d) (and this is most important) he’s a TOP.

This smug motherfucker only gave me “d” (no pun intended) and I ended up kicking out the window shield of his car and got arrested. I still have a warrant in Jersey and needless to say I don’t go to Jersey anymore….and I’m more inquisitive of sex partners at what is an open sexual environment like Folsom.

I’m not trying to be a complete heinous bitch when I say this but I’ve spent years at a time avoiding Folsom Street Fair or as me and the other colored girls called it “ the middle aged white dudes on testosterone treatment wearing dead cows and sexually ignoring me party”—but of course that’s me at my most judgmental- in actuality it’s a fairly mixed crowd of show boaty perverts—gender inclusive and all in all still in this way encapsulates the sexual aquarium that is SF. I mean I’m not a TOTAL hater… I like getting beat up during sex as much as the next faggot.

These days my level of PTSD that I’ve accumulated being a “woke” faggot in the world kinda limits the amount of time I spend in large crowds. To be honest Folsom is an exciting public sex scene but also a crowded street fair that’s always butts to nuts—and not always in a sexy way. I do like to go because I am still in solidarity with sex positivity, open expression, and above all golden showers from businessmen, but to be honest I’ll probably be spending the next Folsom at the bathhouse and avoid all the middleman. If you are reading this and are around please feel free to join me (raw only please)…