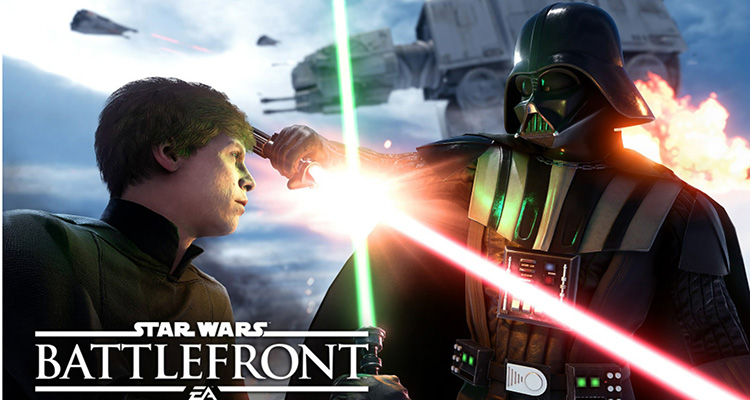 The game is being recognized to be the most detailed Star Wars title to date. Releases November 17.

Luke… I am your father.

Those five words became movie history when the amazing and jaw dropping “Empire Strikes Back” hit theaters right after “A New Hope.” “Star Wars” is a movie saga that, as kids, took us to Yoda’s home in the swamps, the desert sands of Luke’s beginnings… and to the cold dangerous, icy planet of Hoth.

As kids we were battling Vader, repeating the dialogue and the scenes, hell, we were using our lightsabers to duel Luke Skywalker or Darth Vader!!! It was iconic! And now we are on the cusp of a more diverse cast, new story, and new characters to whisk us away to the universe we all fell in love with once again… And with it… comes Star Wars Battlefront.

This game stunned E3 last year with it’s bone chilling sound effects, first person shooting, ships  and vehicles gameplay, and the sheer scale of the worlds… it all was just astounding. This month Battlefront is releasing all over the United States and it is sure to be released in some other countries as well.

We are here to tell you why this game is so !@#$%^ important. So put on your seat belts and get ready to hit light speed.

Star Wars Battlefront is being developed by DICE studios. The company that brought you the Battlefield series and as well as the innovative title and classic Mirror’s Edge. With dedication and perseverance, they have been pouring their souls into Battlefront and it is no miracle why the game is being recognized to be the most detailed Star Wars title to date.

From the sound effects and visuals, DICE is and has been nailing the feel of living out the most epic battles of the entire series. Ranging from Episode IV -VI you traverse snowy plains, dense wooded areas from Return of the Jedi, and you can control some of the best spaceships (Looking at you Millennium Falcon) across the sky to wage war against other players.

Now keep in mind, before you buy the title, remember that this game will not have a single player campaign. The studio felt that in the best interest of what they were aiming for, the game will have many other modes, but the single player mode won’t be one of them. Instead the feel and driving force of the title is to play with your friends and other players online while enjoying the camaraderie and adrenaline of the Star Wars canon.

Now this is where is gets really interesting… There are so many different ways to play! You can be a stormtrooper, fly a Tie-Fighter, be a Rebel, fly a X-Wing…or hell, fly Han Solo’s ship and annihilate the opposing side. Oh, did I mention you can be a !@#$%^ Jedi and fight Darth Vader one on one!? Yes, that’s right. Be Luke Skywalker or Darth Vader and use the force for evil or good to help your side win the war. Yea… and this all at the heels of the upcoming installment of Star Wars: The Force Awakens….chyeah…which, THAT is a WHOLE another conversation..

Just know that the game releases November 17, 2015. Grab your lightsaber, get your squad ready, and buy some energy drinks and block out your work schedule… May the force be with you… because you are going to see some serious shit!