The Rostow Report by Ann Rostow | 03.15 | The Fight Magazine 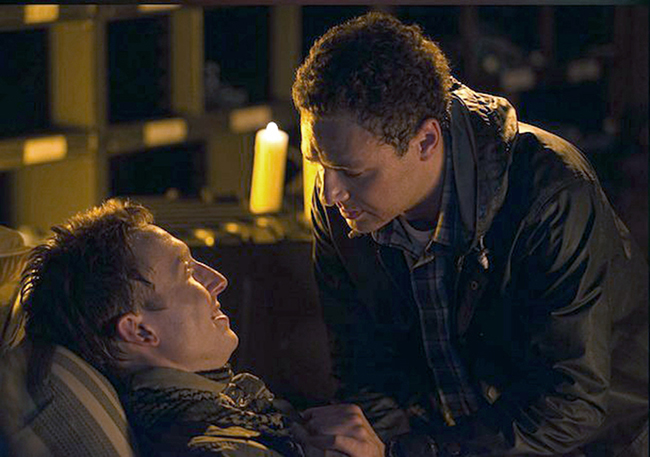 Why are cannibalism and grotesque necrotic monsters fine, while an innocuous kiss between two men sends people over the revulsion line?

I haven’t watched “The Walking Dead,” so it’s hard for me to comment on the news that they recently showed a gay kiss, presumably between two non-zombies although I guess I don’t know that for sure. I do know that a bunch of fans reacted negatively, provoking some commentators to wonder why cannibalism and grotesque necrotic monsters are fine, while an innocuous kiss between two men sends people over the revulsion line.

Yet that doesn’t seem strange to me. There’s a large sophomoric male demographic that loves gory stuff but lacks the sexual security to tolerate even a whiff of gayness. It’s not at all surprising that a bunch of them took to Twitter or whatever to voice their anxiety. Plus, it looks like there was another group that was just fine with the scene. So there.

It’s not really news in my book, but I’m leading with the story because it led me to a link that showed 31 animals kissing which was really cute. Most of the animals looked as if they were touching noses rather than actually kissing, but their affection was heartwarming. I’m not a vegetarian but I find it increasingly difficult to compartmentalize my growing respect for animals with my hunger for steak and bacon. That said, I still manage to cruise the butcher aisles on shopping day while watching adorable pigs and lambs frolic on youtube the day after.

One more thing. Just now when I was wondering how someone could get grossed out by a kiss, I recalled the commercial with the repellent guy at the restaurant who makes out with a hand puppet at the table. I’m not making excuses for the people who can’t tolerate a gay lip lock on TV. I’m just saying that it’s possible to be disgusted by a kiss. Mel and I have to grab for the remote and change the channel whenever the puppet-phile appears.

So, since we last communed, marriage equality has fitfully arrived throughout most of the state of Alabama. Oh, and we also had one marriage conducted in Texas, actually in my own home of Austin, although our attorney general has vowed to reverse the wedding and somehow un-marry the brides. Jerk.

In Alabama, meanwhile, a federal judge struck the state’s antigay marriage amendment in a decision that took effect February 9. Before that date, Alabama authorities asked both the Eleventh Circuit and the U.S. Supreme Court for an emergency stay, but both courts refused to stop the marriages. In a noteworthy dissent, Justice Thomas condemned the denial of a stay as an affront to Alabama voters, and Justice Scalia agreed. That doesn’t mean that the vote was 7-2 however, because other conservative justices could also have disagreed with the outcome without signing on to Justice Thomas’s comments. The only thing we do know is that at least five justices preferred that the wedding tide continue to roll.

Even after the marriage equality deadline arrived, a large number of Alabama’s probate judges continued to refuse service, insisting that the (perfectly clear) legal situation was too complex to interpret. Gay couples were obliged to go back to the court for another, more explicit, ruling, which at last convinced most of the recalcitrant judges to open their marriage windows. As I write, almost all Alabama counties are offering marriage licenses on an equal basis, and the governor has confirmed that his state will respect federal law.

STRAIGHT FRIENDS AND BEING “SORT OF” MARRIED

As for Texas, a state court judge in Travis County granted a marriage license to Sarah Goodfriend and Suzanne Bryant, a couple for 30 years who are fighting (Goodfriend’s) cancer. Newly elected ogre, Attorney General Ken Paxton, immediately asked the Texas Supreme Court to void the license. I’m not sure what the Texas court will do, but we expect the U.S. Court of Appeals for the Fifth Circuit to rule on marriage any day now. That federal appellate ruling should set near-term marriage policy for Texas, Mississippi and Louisiana. Obviously, whatever the Fifth Circuit decides will be quickly confirmed or reversed by the U.S. Supreme Court this summer. This is all to say that the actions of state court judges in Texas will soon be overrun by federal courts.

On a personal note, I was struck by the number of (straight) friends who asked me if Mel and I were going to get married now that a license has been granted in our town. But we’ve been legally married since we went to California for that purpose back in 2008! I thought everyone knew this, but now I think they thought we were just “sort of” married, or maybe just calling ourselves married, or maybe that we had a commitment ceremony, or maybe they thought that same-sex marriages were unlike traditional marriages in that we could just get married over and over again in different venues. It bugged me.

By the way, the Eleventh Circuit has announced that they will shelve their marriage appeals (from Florida and Alabama) until after the High Court rules. The Eighth Circuit, on the other hand, will hear arguments in May on cases out of Arkansas and Missouri. It’s not clear why the appellate court decided to proceed with litigation that will be instantly outclassed by a Supreme Court opinion. Perhaps they want to give the nine justices the benefit of their (presumably conservative) insights on the subject.

GAY TEENS VERSUS NERDS OR GEEKS

Did you watch the Oscars? Of course you did! But did you know that the guy who gave the touching speech about suicide is straight? I know, I know. He did not look it. More interesting has been some of the reaction to his call for young people to “stay weird” despite the bullying and depression that can be triggered by not fitting in.

Here’s the thing. The guy wrote the screenplay for The Imitation Game, the movie about gay mathematician Alan Turing, who helped break the German code in World War II, but was later arrested for being gay and killed himself. The movie, which I haven’t seen, is also accused of downplaying the side plot of Turing’s sexual orientation.

So here’s the question. Are the problems faced by gay and lesbian teens the same as those faced by, I don’t know, nerds or geeks or “weirdos?” Obviously, bullying and social isolation are bad things regardless of the motivation of the oppressors. But isn’t there something clueless about a straight guy conflating homophobia with the generic hostility that greets many high school students who manifest a degree of eccentricity? Almost like a guy with a dark tan talking about the hardships faced by “people of color.”

True, the guy didn’t say he was depressed because he was gay. But his introduction was all about Alan Turing, so it seemed clear he was talking about antigay harassment in school. Given that he was straight, his heartfelt appreciation for weirdness also seemed to merge gayness with weirdness, even though you can be the epitome of the perfect high school star and still get gay bashed just as you can be weird and still be the most popular kid on campus.

I suppose my point is that it’s not “weirdness” that needs to be protected. It’s “gayness.”