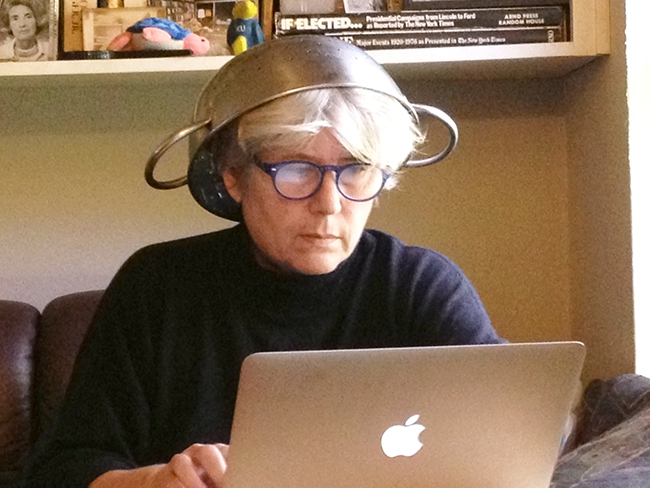 Poland has just ruled that Pastafarianism is a legitimate religion. Absurd? Perhaps. But no more absurd than allowing
conservative Christians to insist that
providing public accommodation to gay men and women is a violation of faith.

Why did THE FIGHT editors pick the day before Thanksgiving to request this month’s column? I have no idea, but I must say I appreciate having an excuse to skip the trip to the insanely crowded grocery store. Sorry honey! Have to work! Good luck out there.

I go back and forth about Thanksgiving. I’m a female baby boomer, which means I can count on one hand the Thanksgivings that have not obliged me to perform some combination of shopping, cooking, arranging and (worst of all) near constant cleaning. I know that on the other hand, many of you guys have always enjoyed a carefree day of eating and watching sports; a magical day where everything “just happened” in a kitchen full of busy female bees. Hey! I’m not bitter.

So since we last communed in these pages, the U.S. Court of Appeals for the Sixth Circuit ruled against marriage equality in four cases out of Michigan, Ohio, Tennessee and Kentucky. I’m sure you’ve read about that by now.

And I’m sure you’ve also gathered by now that the 2-1 appellate panel loss has a very thick and glossy silver lining, to wit the possibility that the Supreme Court may once again consider one or more marriage cases for their 2014/2015 session.

THE MOMENT OF TRUTH AND DEMANDING RESOLUTION

Normally, there’s a long delay between the time an appellate court rules and the time that the High Court might see a petition. For one thing, the losers have to decide whether or not to appeal to the full appellate court. They have weeks to make this decision, but in these cases it took us a day or two to decide to go straight to the justices.

Then, the lawyers have to draft a petition, normally a lengthy process-up to three months-culminating in a finely wrought brief. This time, however, we slapped our petitions together in no time and zipped them over to Washington. It’s already done.

Next, the other side has weeks to forge a well-reasoned reply. But yet again we’re in luck, because the state of Michigan has already replied, agreeing with us that the Court should hear marriage equality without further delay. I can only assume that we will file our reply to Michigan’s reply before you even read this column. In other words, everyone wants to rush this appeal to the High Court’s current docket.

So let’s say a petition on Michigan arrives at the Court by mid-December, while petitions on other cases are done in time for the early January conference. Will the Court duck review again, just as it did back on October 6? Will the Court delay in order to postpone the moment of truth for another year or so?

I just can’t imagine that. True, I couldn’t imagine that the justices would decline to review the marriage cases out of the Tenth and Fourth Circuits earlier this fall. But now we have the much talked about “circuit split,” a difference of opinion at the appellate courts that demands resolution. And surely at least four out of our five allies on the bench will want this case handled now. Justice Ginsburg, God bless her, has survived two cancers and had a stent put into her heart in late November. Do we really want to roll the dice on another justice?

THIRTY-FIVE AND COUNTING: THE STATE OF MARRIAGE EQUALITY

Meanwhile, after a confusing array of motions and squeals and whining and more motions and requests for stays and begging for delays, we finally brought marriage equality to 35 states. The extra states were the ones that fell under the jurisdictions of the Tenth, Fourth and Ninth Circuits; appellate courts that had ruled in favor of marriage equality on behalf of certain other states under their law. It took some legal maneuvers, but states like South Carolina, Montana, Kansas and others finally fell in line with binding law. Kansas is still protesting, but it’s basically over for the Jayhawks. Some other states are still appealing their fate, but since marriages are legal during this process it doesn’t really matter.

In Mississippi, one of the few Democratic federal judges somehow wound up on a marriage equality case, and guess what? We won! That ruling, on November 25, will be stayed pending appeal to the U.S. Court of Appeals for the Fifth Circuit, where appeals of cases in Texas and Louisiana are already scheduled for oral arguments January 9. I could write more about both those cases, but I won’t.

And on the same day that Mississippi fell, down went Arkansas, where a federal judge ruled against marriage discrimination in a case that will be headed to the Eighth Circuit. There’s a state lawsuit about to finish up in Arkansas as I write, so we’ll see if the Razorbacks see marriage equality before the appellate court steps in.

Let’s just say that things are going our way, and that all these outstanding suits, including those in Florida, the Dakotas and elsewhere, will be moot if the Supreme Court does its job.

Meanwhile, as marriage equality approaches the status of fait accompli, we are preparing for the next battle, a complicated, and probably lengthy national debate over “religious freedom.” And we’re not debating the straightforward accommodation of, let’s say, kosher meals for a Jewish prisoner, or the right to wear a headscarf at work.

No, in our current constitutional framework, we seem to be debating the right to claim that any behavior is a manifestation of some sacred vow. As Justice Alito noted in the Hobby Lobby decision (which involved, not the constitution, but federal law) it is not for the courts to presume to judge the legitimacy of a religious belief.

This is why I recently paid $20 to become an ordained minister in the Church of the Flying Spaghetti Monster. Funny? Of course. But it’s more than that. The entire religion is contrived to make a serious point about the separation of church and state and the position of faith in the public square. Indeed, a woman in Utah just made headlines for insisting on wearing a pasta strainer in her driver’s license photo. It turns out that Utah doesn’t try to pass judgment on religions and that this woman is one of a dozen others who has donned the Pastafarian symbol for her identity card.

In Florida, a collision of religious displays in the state capitol rotunda is now the subject of legal action. After authorities allowed a creche, they were also obliged to welcome other symbols of faith, including a  Festivus pole made out of beer cans and a Pastafarian presentation that consisted of some holy noodles and a sign on a red plastic office chair. (They are being sued by a Satanic group that apparently strained the tolerance of the local officials with an installation featuring angels falling into a pit of fire.)

Poland has just ruled that Pastafarianism is a legitimate religion.

So why shouldn’t Pastafarians be allowed to pray before town hall meetings, celebrate His Noodley Goodness in the public square, or even refuse to serve unsavory customers? Actually, the Church of the Flying Spaghetti Monster does not discriminate. But what if we did? what if our “faith” demanded it?

The answer is not to diminish the status of minority religions. It is simply to enforce the principle that general laws, enacted for a secular purpose, may incidentally intrude on faith. And further, to keep the state from getting involved in our spiritual, or non-spiritual, lives to begin with.