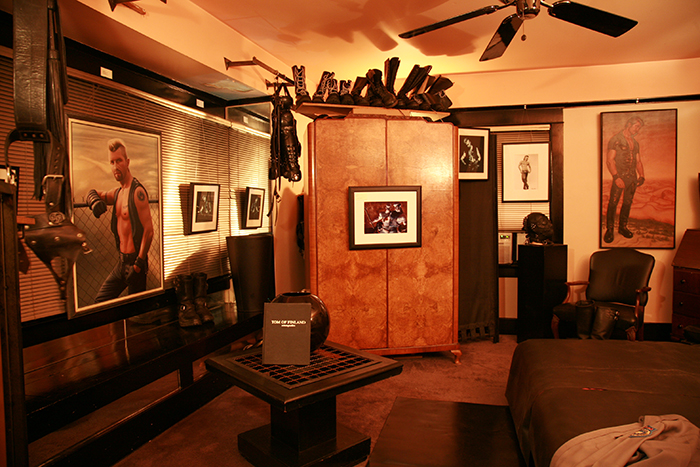 Not your grandmother’s old house—homoerotic art in all its animalistic, sensual, beautiful, minimalistic, exaggerated and comical form is on display from floor to ceiling.

Last month I was invited to visit the Tom of Finland Foundation – or TOM House as it is called by those who know and love this place.

Tom of Finland – whose real name is Touko Laaksonen – was a Finnish artist notable for his stylized homoerotic fetish art and his influence on late twentieth century gay culture.

Some say his exaggerated masculine homoerotic art spawned the leather movement. Some credit him for inspiring rebellious motorcycle gangs in the ’50s and ’60s. Others felt liberated sexually through his art at a time when the female form ruled the art world.

He has been called one of the five most influential artists of the twentieth century. And he lived a portion of his life in the heart of Los Angeles, at 1421 Laveta Terrace, in Echo Park.

The house is hidden behind tall hedges and a large gate shields it from prying eyes.  Honestly, I expected the King of Gay Kink’s former home to be a secluded Addams Family-style mansion standing tall at the top of a winding road with thunder and lightning flashing in the background, which I reckon is pretty dumb of me, considering the place is called TOM House — not Tom’s Mansion.

A giant friendly dog sniffed me out before I was greeted by S.R. Sharp, the Foundation’s Vice President (President and Cofounder Durk Dehner was in Finland organizing three exhibitions and two books there, after being a speaker at an international museum conference in Liverpool the week before.)

Sharp, in a causal t-shirt with hacked off sleeves, shorts and some beat-up roach-stomping combat boots, plopped me down next to him on the shady front porch and immediately put me on the spot for not attending the Foundation’s most recent event, TOM’s Bar – a lot party held at Faultline this past Father’s Day.

It was the 23rd annual commemoration of TOM – as well as a celebration of Finland’s recent official release of 3-stamp sheets, featuring original drawings by Touko Laaksonen, aka Tom of Finland.

“Tom asked me not to have a funeral but to have a party – like a scene from his artwork – people coming together and having a hell of a good time.” reveals Sharp. “We created a celebration – the first ‘TOM’s Bar’ in 1992, which has become a Tom of Finland Foundation annual event honoring Tom.”

The Tom of Finland Foundation has been dedicated to protecting, preserving and promoting art for over a quarter century.  The House serves as a museum, art gallery and a venue for live workshops, art fairs, and holds contests for emerging artists.  It has also been home to other artists, Foundation members, members from the leather community, and friends of friends in need of a safe place to stay.

Sharp started out as a volunteer and eventually moved in to run things about a decade ago. “I live in a museum!” he said.  “Durk bought the house in ’79 and Tom started coming here in the early ’80s,” he added. “The nice thing about having our foundation in a residence is that it really helps with our mission.  There is art hanging in every place.  It used to be that if you bought this art, you would put it under the bed, so it really helps to have a residence where you can show art the way it’s supposed to be shown.”

“My definition of an artist is someone who creates something that’s never been created before,” he continued. “They have the eye to see something that no one else does.  They’re the only ones who can manifest it and certainly Tom did that. There weren’t images like this before Tom of Finland.  We were feminized, we were sissied, or made lesser than – and
he really made us more than.  We could be anybody.  We didn’t have to be what they made us out to be.  It took on the realm of fetish. And it became real.  We saw his artwork and started dressing and acting like these guys.  He created a world.”

The Tom of Finland Foundation continues to catalogue its extensive collection of visual materials.  S.R. Sharp was welcoming, easygoing and extremely knowledgeable on the subject of Tom’s art and the artists he inspired.

My personal tour included a look inside Tom’s bedroom.  I beheld his old uniform and other personal belongings.  I even got a whiff of his hefty collection of knee-high leather boots.

The garden is sort of quirky – with giant cutouts of Tom’s drawings jumping out of the greenery.  The only thing I missed was the dungeon in the basement.  According to Sharp it was “too sticky at the moment,” so I’m going to have to go back to get into that.