ONE OF THE MOST SIGNIFICANT GAY RIGHTS RULINGS IN HISTORY TO DATE. 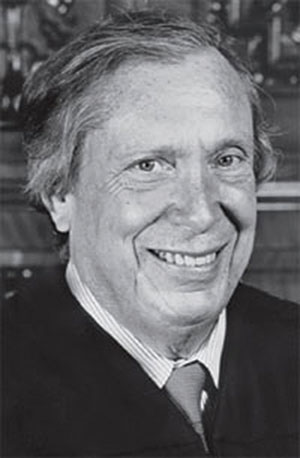 OUR LEGAL FIGHT FOR MARRIAGE EQUALITY has exploded into dozens of state and federal cases, far too many for even the most organized LGBT reporter to track. As for me, I have been accustomed to juggling all our big lawsuits in my head, an easy trick back in the day when we had two or three major cases at any one time. Now, well, I am doing my best.

As I write, however, the most important legal news is an obvious pick. No, it’s not the federal opinion legalizing marriage in Utah. It’s not the federal marriage ruling in our favor out of Oklahoma. Indeed, it’s not even a mar- riage ruling at all. It’s a deci- sion out of the U.S. Court of Appeals for the Ninth Circuit, written by our old friend Stephen Reinhardt, author of the weird Prop 8 opinion that was subsequently voided by the High Court on a technicality.

In this case, Reinhardt and his two (Democratically ap- pointed) panelists, ruled that gay men and women cannot be summarily dropped from a jury because of sexual orientation. The High Court has already made it clear in two separate opinions that lawyers may not exclude jury candidates due to race or gender. Now, sexual orienta- tion is added to the list on the left coast.

Well, that’s nice. But for many of us, it’s like the gays in the military debate. We don’t want to be excluded from anything on principle. But we’re not exactly doing back flips in order to join the army or spend a couple of weeks reporting for jury duty. But forget jury duty. The significance of the opinion lies in the reasoning. Here, Reinhardt rules that courts examining cases of gay bias must put the burden of proof on the alleged offender, applying heightened legal scrutiny to the circumstances at issue. His deci- sion rewrites the legal handbook to our advantage throughout the western United States.

If it stands, and is not reviewed and overturned by the full Ninth Circuit or the Supreme Court, we will win the marriage case against Nevada now pending in the Ninth Circuit. Almost automatically.

And now, let’s talk briefly about the importance of legal reason- ing. It’s normal to see a headline and skip the details. “Court Rules for Gay Couples.” Yay!!!! On to the sports page where we can pore over the minute details of Kansas basketball.

But the real news is always in the details. Victory is important. But did Kansas win in a blowout? Or did their star player break a kneecap while the team fumbled its way to a one-point edge? What does the future hold?

A couple of years ago as I mentioned, Judge Reinholdt wrote the opinion that struck California’s Prop 8 on appeal from Judge Walker’s court. And yet, our legal allies were baffled. The opinion never really grappled with the underlying question of marriage equality. Nor did it deal with the level of scrutiny that should be applied to equal protection cases involv- ing sexual orientation. Arguably, it did not even leave a mark on gay rights jurisprudence. Instead, Reinhardt wrote that a state may not remove constitutional rights from a specific group of people, a guideline that could apply just as easily to dog walkers as gay people, and one which had nothing to do with marriage.

We had been hoping for a big juicy gay rights precedent from a federal appellate court, and we got a dry saltine. Analysts thought Reinhardt might have written this nondescript opinion in order to keep the case from exploding in our gay faces at a higher court. But what- ever his motive, his ruling managed to kill Prop 8 without advancing the ball in our direction.

JUDGE REINHARDT HAS DELIVERED THE GOODS… HE IS NOT CALLED THE LIBERAL LION OF THE NINTH CIRCUIT FOR NOTHING.

Now Judge Reinhardt has delivered the goods. But he has done so in a context that hardly ripples the waters in the mainstreams of society. Jury duty? Who cares! Marriage? Now, despite our progress that’s still a difficult subject to say the least. It’s hard to avoid the con- clusion that Judge Reinhardt is a strategist at heart, looking ahead to the repercussions of his opinions and the end game of a civil rights movement that he clearly supports. He is not called the liberal lion of the Ninth Circuit for nothing.

Judge Reinhardt did something more. Instead of wading through the usual analysis that governs a debate on heightened scrutiny, Reinhardt examined Justice Kennedy’s opaque opinion in Windsor, and deter- mined that even though Kennedy did not come right out and announce that sexual orientation deserved special consideration by the courts (an announcement that would have generated shockwaves throughout the legal system) Kennedy’s approach to last June’s DOMA case nonetheless implied that heightened scrutiny was in effect.

If other courts pick up on Reinhardt’s reasoning, our victory against the Defense of Marriage Act would carry over to any and all cases of gay bias that reach the federal courts. Did I mention that we now have dozens of federal marriage cases in the pipeline?

That said, Justice Kennedy has always managed to rule in our favor without actually spelling out the type of hard legal reasoning that would force future courts to follow suit. At first blush, it looked as if Lawrence v Texas would do for gay rights what Roe v Wade did for abortion rights. But indeed it proved fairly easy for conservative courts to sidestep Lawrence, as they did with Kennedy’s other gay rights decision, Romer v Evans.

When Kennedy delivered yet another vaguely reasoned gay rights decision last summer, I personally was afraid that once again the opinion was going to be up for grabs. Liberal courts would use Windsor to uphold our rights. Conservative courts would note that no special scru- tiny was ordered, and nowhere did Kennedy dictate how states would define marriage.

And yet, this hasn’t been the case. Courts in Ohio, Utah, Oklahoma and elsewhere have gone out of their way to interpret Windsor as broadly as possible. Now, the Ninth Circuit joins the party, delivering what might be one of the most significant gay rights rulings in history to date. Justice Kennedy may have hedged his bets with his semantic legerdemain all these years. But when you hold his rulings up to the light, the story they tell is becoming explicit.