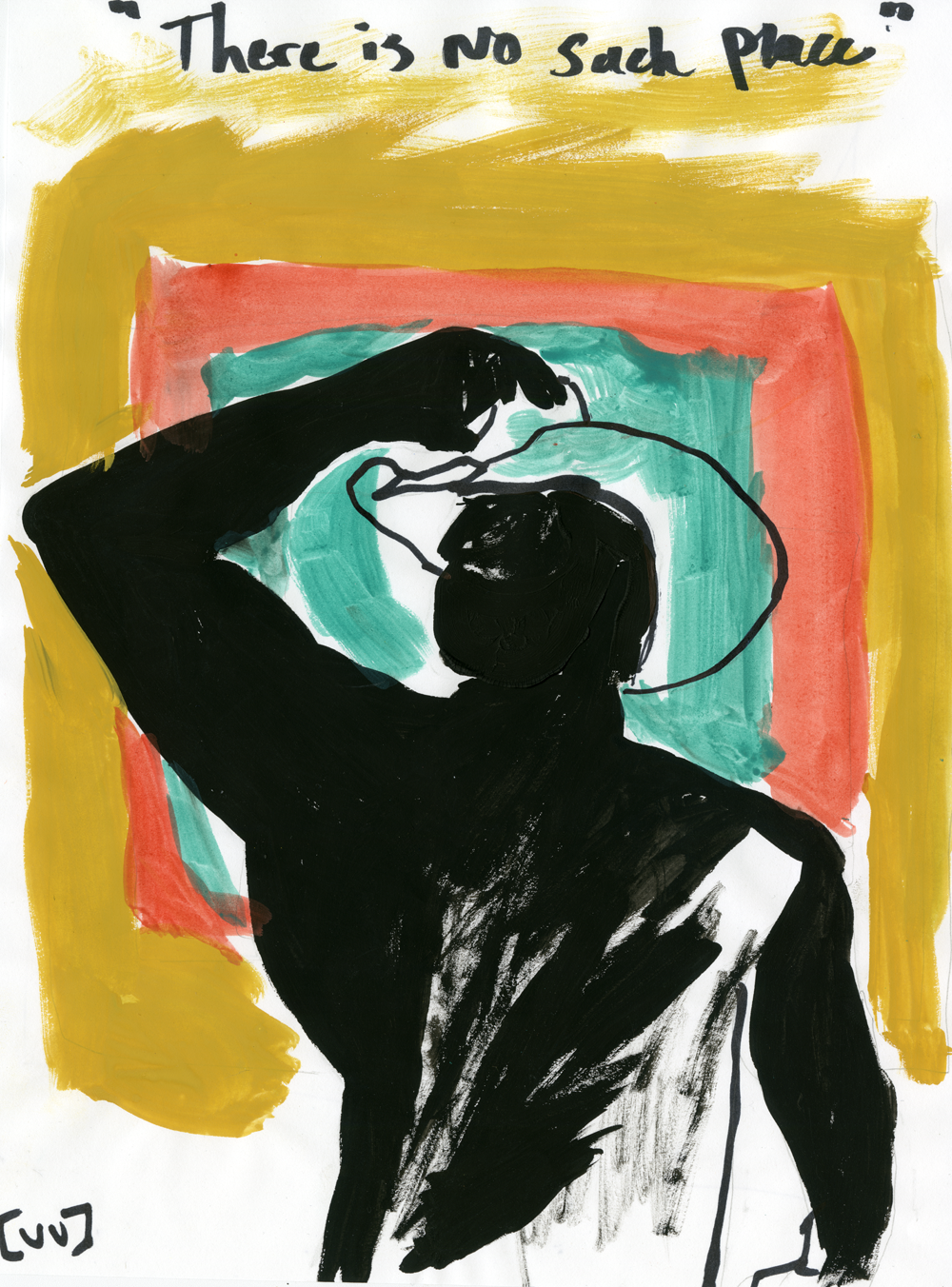 Tom of Finland Foundation is pleased to announce a presentation of their current artist-in-residence, Hovvard. The exhibition, There is no such place, opens on Saturday, December 28, 2019 with a reception from 2:00 to 6:00 p.m.

This project is a follow up to Stuck in my room where we follow the narrative of a boy’s view on love and peace from his bedroom window. Hidden in this was finding out there was no resolution to this desire, once the boy experienced his desires first- hand, we found out that our boy was jaded from the negatives of love. Leaving such a needy heart so unguarded, he found himself lost and angry for what he needed so badly burned him till he no longer desired this. Which brings us to There’s no such place where we learn more of a background on this boy, let’s call him the “midnight cowboy”.

In this body of work, we will explore more than a dozen paintings, with a dip into minimalism, and homoerotic scenes, here lies the true view of these things our cowboy held onto for hope. Playing on the basic idea of colors, we tap into religion, cheating, love, loneliness, depression, ego, pride, lust, self-esteem, home. For the colors we look at their role in the bible, in order to understand religion through the eyes of the cowboy, religion to him was something he looked up to, until he found a system of authority that shamed him for his sexual desires and carnal pleasure. We tap into intimacy, and how its role in the cowboy’s life was instantly jaded by his desires to fulfill his other sexual desires and kinks he otherwise couldn’t explore in his past relationships. We will trace the lines of how his self-esteem was powered by ego, leaving him drunk off power trips brought on by his rising status and people he surrounds himself with. The overall concept is to showcase my struggles with religion, love, and self-acceptance.

The body of work really showcases my personal journey through my moments of love and religion, masked with my love for bear, and bearded men. Using these figures and images is my narrative to breaking down hyper masculine stereo types in the Gay community. By using a soft color palate allows me to paint these burly men as soft shapes and beards. I find by stripping down these men, to their underwear, jock straps, and nude allows me to paint a behind-closed-door, reflective image to convey complete vulnerability and body empowerment, without to many defining lines.

My time at TOM House is one I cannot forget. Being here allowed me to observe the history of the Foundation and Tom’s work, along with the extensive amount of history of other talented Queer artists. While here I have been able to create two exhibitions in two months. This opportunity has allowed me to focus on my works in full detail from start to finish, this has been amazing to finally have the chance to do, because I have been able to break apart every detail and understand what I was creating. Along the way, I have been able to meet so many amazing people and artists who supported every choice I made, and so many words of advice and stories of their experiences with art or the Foundation. Overall, I appreciate all the time I have spent here, I believe that I have really accepted my craft and sexuality.”

On view by appointment through 13th January, 2020.

Online Information About the Exhibition

Jared Cabrera goes by the artist name “Hovvrad” (pronounced how rad). He’s a 22 year-old, multi medium artist, working in cinematography, painting, and photography. Hovvrad grew up in Ontario, California as an IE gay cowboy. He created most of his work out of pure emotional pains or triumphs because a part of him has a lot to say about certain parts or experiences of life. He coined the name Hovvrad when he started making films around the age of 17, and the idea was purely a mix of wanting to standout on a list of directors as he navigated through his video career in the beginning which just ended up turning into what many people know him as today.

He began a creative career around the age of 18 when he would skip classes in college to go take photos of his friends or film his little journeys to LA, and beyond. It all started with a love for fashion, rap music, and the creativity of the street photographers at the time. He loved creating look book visuals, curating looks for photo shoots and styling. From the age of 18 he really took his creative career serious by dropping out of his 2nd semester in college and leaving home to have the freedom of being able to be a creative without worrying about what his parents thought, which was a very hard lesson.

Hovvrad’s fun, childlike nature of creating work, slowly developed into an emotional, manic depressive way of creating voicing his opinions on topics and events in his life. He started to suffer from depression and anxiety to the point where all the fun fashions films stopped, the photography got darker and a lot more centered around love, and emotional stories he was dealing with at the time. He caught my biggest break after he moved back home at the age of 21 grabbing jobs with his friends clothing line “Threaded in thought” where for the 1st time he worked with models, budgets, studios spaces, and the freedom to script something from start to finish on such a beautiful story behind it. As time progressed he was able to dive deeper into his creative passions of film making and photography, jumping on more projects with Nike, Vapor Fashion, NBA, to name a few clothing brands and designers. Also at this time he was working a lot in the music arena of art, creating music videos, photo shoots and album art for many music artist.

Around April of 2019 he dove into painting and caught his first solo exhibition with the help of Rudy Garcia, and some close friends. From there he’s been able to meet so many more talented artist who have made names for themselves in their mediums and has gained a new perspective on what being a creative really is. Since April he’s done a few more exhibits leaving him with a multi-medium series of works that have been able to tie all together from short films to paintings right back to photography.

As 2019 wraps up his prolific year with the opportunity of being an artist-in-residence at Tom of Finland Foundation. He believes he’s developed work from a space of innocence to something that speaks for his emotional journey called My life, being a little extra sad along the way, because remember Boy should cry.

####
TOM OF FINLAND FOUNDATION – Tom of Finland Foundation is a nonprofit organization, a 501(c)(3) Educational Archive, supported by donations from the public, various fundraising events and dues from its loyal membership. The people who support their efforts and goals dedicate themselves both financially and as volunteers enabling TOM’s organization to present an impressive number of activities on a limited budget.

The Foundation hosts social events throughout the year to raise funds and to provide a sense of community for fans of TOM and supporters of art. They provide art fairs, a competition for emerging artists, salons and workshops. Headquartered in TOM House in the Echo Park neighborhood of Los Angeles, the Tom of Finland library and archives serve both researchers and eager visitors.