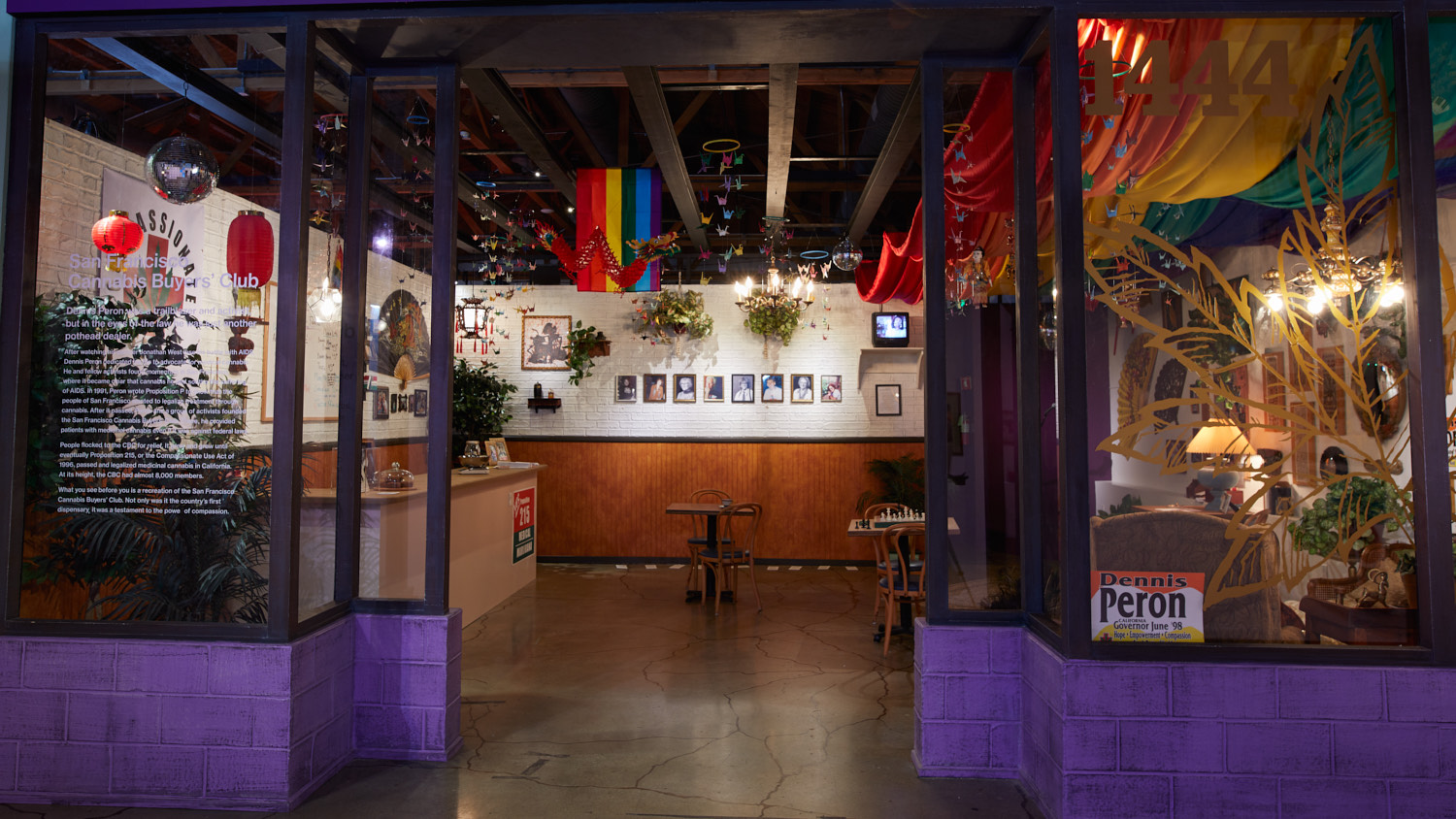 This AIDS Awareness Month, The FIGHT reflects back on an important conversation in LGBTQ+ and HIV/AIDS history.

On October 23, 2019:  Weedmaps Museum of Weed hosted LA’s first open panel discussion on the history and development of the cannabis movement in relation to HIV/AIDS.

Sitting on this discussion were representatives from the Black LGBTQ+ Movement, Equality California, Dennis Peron Legacy Project and others, moderated by Jai Rodriguez—the original cast on Bravo’s Queer Eye for the Straight Guy and Broadway’s RENT.

In 1992, during the peak of the U.S. AIDS epidemic, Dennis Peron—cannabis activist and celebrated member of the gay community—became the first to open a fully-functional, legal cannabis dispensary in the United States. The club operated to serve thousands of AIDS patients and underserved people in the state of California. He did not do it alone.

“Dennis was one of us,” states surviving partner John J. Entwistle. John met Dennis in New York where John was working with cannabis leader, Dana Beal. This is where he first ran into the nameless killer that was AIDS. “Everyone dead…it leaves you wanting to join them.”

Regarding the association between the  cannabis and LGBTQ+ movements: “[They] are attached at the hip really…Stonewall was in 1969, the first NORML [National Organization for the Reform of Marijuana Laws] meeting a year later.” Carl Fillichio, VP of Weedmaps shares: “HIV/AIDS really accelerated cannabis legalization.”

“Cannabis has been intertwined in the movement of resistance and love and compassion since before 1996…if you are a member of a community of color, or an immigrant, or a person living with HIV you are really at the bottom of all [health] measures.”

This reality brings the story of cannabis liberation and treatment for AIDS back to California, when in 1995, Jeff Jones founded the Oakland Cannabis Buyers Cooperative. Paul Scott, founder of the LA Black LGBTQ+ Movement and former HIV/AIDS nurse, was asked to be on the board of directors for this initiative.

First, it should be noted in this discussion on cannabis legalization as a response to AIDS in America:

“White people created the law in the first place [prohibition], so it took white people to change it. But the reality is there were a lot of black and brown people that suffered and sacrificed a whole lot in the background to change this law.”

In Oakland, Nate Miley—a black man—was the only ally Jeff Jones had on the city council. Scott describes the lengths he witnessed Jones go to in order to keep OCBC open: to the point of declaring a state of emergency.

Without Miley, he may have never succeeded.

“That’s where we black people and brown people played the role.”

During his time in the Bay, Scott visited Dennis Peron’s farm. He witnessed “…lines of dejected black and brown people…in line to buy cannabis legally for the first time.” He decided to take his experience back to Southern California and found the Inglewood Wellness Center in 1999.

As of 2017, Americans of color still account for drastically disproportionate rates of new HIV infections, nationally. According to the CDC, out of 38,739 reported diagnoses in 2017: 43% were black, 26% Hispanic-Latinx. (Both groups represent under 17% of U.S. population, respectively.)

Host Jai Rodriguez describes his experience growing up Filipino-American and losing both his aunt and cousin to the virus. Gabe Quinto, former mayor of El Cerritos, shares his inability to continue as a musician after his infection. Today, however, a positive HIV diagnosis does not always equal a death sentence.

“I am a PROUD Black HIV Positive Transwoman! #NationalComingOutDay” Tweeted trans activist, Blossom C. Brown on October 11, 2017. Blossom is also an actor, producer, and film-maker, most recently noted for her contributions to CNN’s LGBTQ+ Town Hall on October 10 of this year. Blossom shared her experience with cannabis’ medicinal properties within the trans community.

“When we talk about gender confirming surgeries, it helps elevate the symptoms. It helps ease the pain…[cannabis] saved my life.” In the cases of the trans community’s unavoidable interaction with mass racism, sexism, classism, colorism: “these things cause a lot of trauma. And Anxiety. So, cannabis is so helpful when it comes to anxiety…in a Tr*mp administration that is trying to erase us…marijuana saves our lives.”

Though access to cannabis has grown exponentially since the height of the AIDS epidemic, largely due to LGBTQ+ and people of color, the work is far from over.

“We have our work cut out for us,” shares Entwistle in an exclusive chat with The FIGHT. “There’s a lot more refinement to go.”

When asked how we as citizens can support efforts to push forward the movement today: “Educate yourselves. Think with an open mind.

I’m personally collecting funds for the San Francisco Gay and Lesbian Society working to archive Dennis Peron’s Legacy. Dennis always focused on our gay and lesbian roots and older people. We gotta remember that, because that’s what got us our success. We shouldn’t forget that.”

And as this movement began, it must continue. Together. Blossom C. Brown reminds us we all have roles in the health and well-being of our entire community:

“When you have allies who really need to elevate your voice and who see you, it’s a big difference.”

LA’s own Richard Eastman, 25-year AIDS survivor and cannabis is currently campaigning for a write-in presidential bid in next year’s 2020 POTUS election.

This discussion was made possible in partnership with Equality California and Weedmaps Museum of Weed.