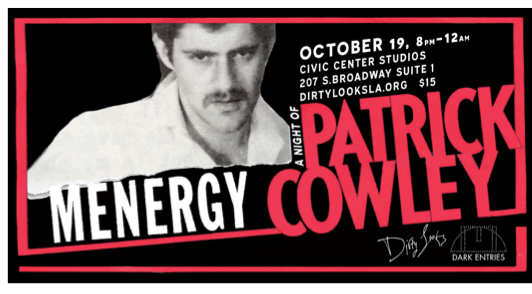 On his 69th birthday, Dirty Looks teams up with Dark Entries Records to celebrate the life of Patrick Cowley, who created his own brand of Hi-NRG dance music, dubbed the “San Francisco Sound.”

Graphics produced by Gwenaël Ratke for the journal’s publication will be brought to life by filmmaker Jill Reiter, alongside video documentation of Cowley honing his craft. Let’s come together to celebrate the journey and genius of Patrick and to appease the disco spirits of so many like him who fell victim to the AIDS crisis.

Patrick Cowley was one of the most revolutionary and influential figures in the canon of electronic dance music. Born in Buffalo, NY on October 19, 1950, Patrick moved to San Francisco in 1971 to study music at the City College of San Francisco. By the mid ’70s, Patrick’s synthesizer techniques landed him a job composing and producing songs for disco diva Sylvester, including hits like “You Make Me Feel (Mighty Real)”, “Dance (Disco Heat)” and “I Need Somebody To Love Tonight.” This helped Patrick obtain more work as a remixer and producer.

Cowley created his own brand of peak time party music known as Hi-NRG, also dubbed “The San Francisco Sound.” By 1981, Patrick had released a string of his own dance 12′′ singles, like “Menergy” and “Megatron Man”. He also co-founded Megatone Records, the label upon which he released his debut album, Megatron Man. Around this time Patrick was hospitalized and diagnosed with an unknown illness: that which would later be called AIDS. Throughout 1982, he composed two more Hi-NRG hits, “Do You Wanna Funk” for Sylvester, and “Right On Target” for Paul Parker, as well as a second solo album Mind Warp. His life was cut short on November 12, 1982, when he passed away 24 days after his 32nd birthday from AIDS-related illness.

Dark Entries was born in the spring of 2009 to release out of print and unreleased underground music as well as contemporary bands. A project of Josh Cheon, a vinyl-focused DJ and collector, Dark Entries takes great care in preserving sound quality and respecting the aesthetics of its artists. All of their releases are a carry over from the DIY days of the 1980s independent record labels. Releases are inspired by the DIY nature of independent record labels. Designer Eloise Leigh is responsible for all reproductions and original concepts. Dark Entries entrusts all of their projects with the best engineer in the state, George Horn at Fantasy Studios, who remasters each release using his 50+ years of knowledge in the industry. With over 100 releases under their belt from Severed Heads, Crash Course In Science, Patrick Cowley to the Dark Entries Editions series focusing on hard to find Italo Disco and Synthpop 12”s.

DL began regular Los Angeles programming in January 2015, instating a national reach for our programs. This is further bolstered by our Dirty Looks Volume series, which accumulates writing and ephemera that reflects our year-round programming in slim publications issued annually.