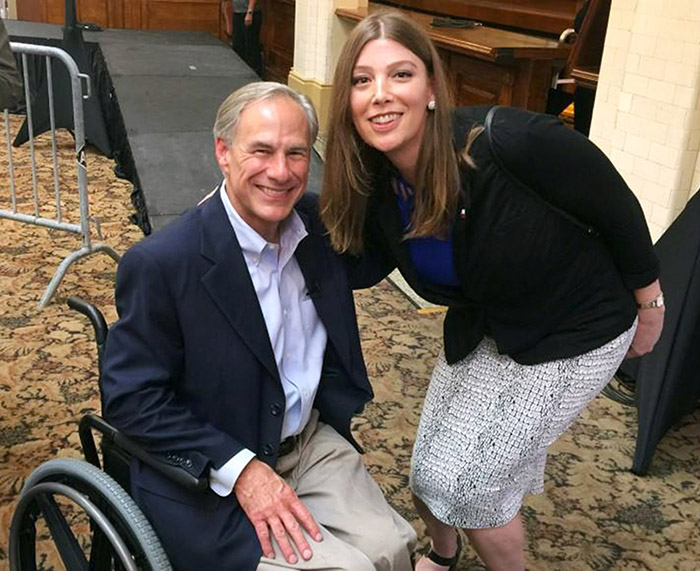 Architect Ashley Smith, a transwoman, cleverly convinced the Texas governor to pose for a selfie with her, asking online how the bathroom police could recognize her as a male by birth if the governor could not. Good question!

Hello my dear FIGHT readers! When it rains, it pours as they say, and we have had a torrent of disturbing legal developments over the last month. Plus, my other dog died and I quit smoking, so now I have zero dogs and a serotonin deficit. On the other hand, I still have a cat and there’s some booze around here somewhere. Maybe I’ll survive.

But before I drown my sorrows, get out your umbrella for a quick deluge.

First, the U.S. Court of Appeals for the Fifth Circuit took the hold off of an antigay law in Mississippi, effectively restoring the green light for discrimination throughout the Land of Dixie. Our side has appealed to the full appellate court.

Then, the Supreme Court beat back the high court of Arkansas, ordering the Hogs to treat gay and straight married couples equally for the purposes of birth certificates (and all other things). This is a positive development of course, but we learned in the process that Neil Gorsuch is far worse than we ever imagined. Gorsuch penned a snarky dissent, basically suggesting that the 2015 marriage ruling didn’t necessarily mandate full equality in all areas. Woah there!

A few days after that, the Texas Supreme Court ruled that the question of whether Houston is obliged to offer benefits to same-sex married couples remains open, and should be considered by a lower court. (!!WTF!!) The lawsuit in question was filed by some disgruntled Houston taxpayers back in 2013, and it sure seemed to most of us as if the U.S. Supreme Court settled that issue once and for all when they ruled in favor of marriage equality. Apparently not as far as the Texas Supremes are concerned.

Had enough? We’re not done yet. After weeks and weeks of delay, the Supreme Court decided to accept the case of a Denver baker who refused service to two gay men. Jack Phillips, owner of Masterpiece Cakeshop, was nailed for violating Colorado’s laws against GLBT discrimination in public accommodation. Given that we’ve already won the case against Phillips, we do not have a great deal to gain from the Court’s review. On the contrary, we have a great deal to lose since any ruling short of total respect for LGBT civil rights will open the door to a sustained period of second-class citizenship.

ALL EYES ON SCOTUS AGAIN

So that’s the bad news in nutshell. The cat does nothing but sleep until roughly two in the morning when she prowls around and purrs loudly. The only alcohol in the house is a bottle of spiced rum that’s been sitting in the freezer for months and a 12-year-old single malt, which amazingly I don’t like. It’s Mel’s. I also have a half bottle of Sauterne that I’m saving to go with some foie gras one of these days. I guess the rum it is.

Moving along, I just deleted a long diatribe that spewed off the tips of my fingers at the expense of our president. Look. We have more LGBT news to discuss and my own Trump derangement syndrome knocks me off message. But man, he’s infuriating.

I already mentioned that the High Court has agreed to hear the Masterpiece Cakeshop case when they return to session next October. Now, Lambda Legal will petition the justices to accept another gay rights case, one which raises the most critical issue left on our community’s civil rights wish list.

The issue, of course, is whether or not sex discrimination encompasses sexual orientation bias and/or gender identity bias. At first, you might think not. There is, after all, a difference between sexism and homophobia.

But the matter is more complicated. A 1989 Supreme Court ruling established that gender stereotyping is a variety of sex discrimination. Ignored for a time, in recent years that precedent has been used successfully in a number of trans-rights cases of workplace sex discrimination under Title VII of the Civil Rights Act of 1964.

Ironically, some gay male Title VII plaintiffs have been able to claim that their workplace harassment was due, not to being gay, but to being effeminate—a violation of the rules against gender stereotyping. Lately, courts have noted with frustration that a straight-acting gay man has no recourse to federal anti-discrimination law, while a heterosexual with a lisp might claim sex bias. Finally, other judges have pointed out that the act of being gay or lesbian is a quintessential violation of gender norms. If enforcing gender norms and stereotypes is an impermissible form of sex discrimination, well you do the math.

Interestingly, if the justices were to rule clearly in our favor on the matter of sex discrimination, then the Masterpiece Cakeshop ruling would have to be a victory as well. Religious expression is not a valid excuse for ignoring laws against sex discrimination.

But what if Masterpiece is decided first, as seems likely? Is religion sufficient justification for ignoring laws against sexual orientation discrimination? And if so, what would that kind of anti-gay precedent do for our Title VII case? It’s frightening to think about.

Ooops. Looks as if I don’t have the space for a lengthy piece on, let’s say, the special session of the Texas legislature, where some lawmakers will be arguing in favor of our own Lone Star bathroom bill. (I live here, remember?) Apparently, IBM just send a dozen or so executives down to Austin to remind a few of these morons that every major employer in this state opposes the bill. We also have a crafty ally in the House Speaker, a moderate Republican which is what passes for a Democrat in the state capitol. We’ll see.

In the mean time, a transwoman cleverly convinced our reactionary governor to pose for a selfie with her, asking online how the bathroom police could recognize her as a male by birth if the governor could not. Good question!