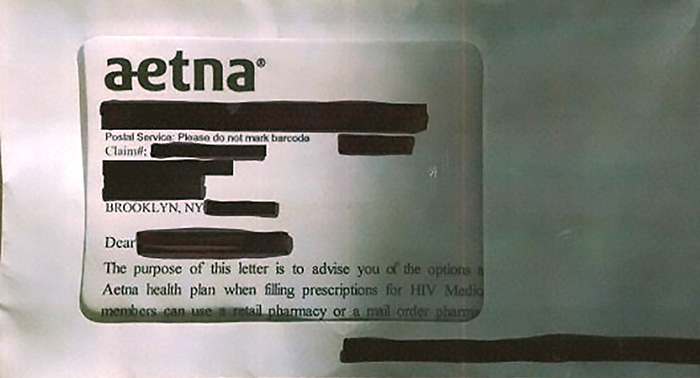 The health insurer Aetna is facing criticism for revealing the HIV status of potentially thousands of customers after it sent out a mailer in which information about ordering prescription HIV drugs was clearly visible through the envelope’s clear window, reports NPR at npr.org.

Aetna says approximately 12,000 customers were sent the mailer on July 28 that potentially revealed private medical information, though the company says it isn’t clear exactly how many were affected, because it depends on how the letter was positioned in the envelope.

“We sincerely apologize to those affected by a mailing issue that inadvertently exposed the personal health information of some Aetna members,” the company said in a statement. “This type of mistake is unacceptable, and we are undertaking a full review of our processes to ensure something like this never happens again.”

In a letter notifying customers of the privacy breach, a copy of which was obtained by NPR, Aetna says it learned on July 31 that personal information may have been exposed through the envelope window.

The letter states that upon investigating, Aetna “confirmed that the vendor handling the mailing had used a window envelope, and, in some cases, the letter could have shifted within the envelope in a way that allowed personal health information to be viewable through the window.”

The Advocate reports, however, that a reader affected by Aetna’s error says he was never contacted by the company and says the contents of the letter were clear to anyone seeing the envelope, regardless of the contents “shifting.”