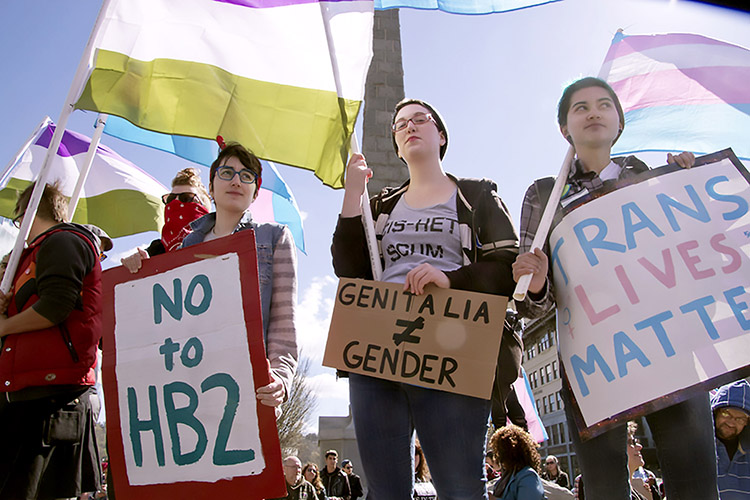 An estimated 1.4 million people—around 0.6 percent of U.S. adults—identify as transgender, according to a new study.

“The findings from this study are critical to current policy discussions that impact transgender people,” said Jody Herman, an author of the study. “Policy debates on access to bathrooms, discrimination, and a host of other issues should rely on the best available data to assess potential impacts, including how many people may be affected.”

The fully urban District of Columbia has the highest percentage of adults who identify as transgender, with 14,550 people—around 2.77 percent of the federal district’s population.

The highest percentages of adults identifying as transgender per state were found in Hawaii, California, Georgia, and New Mexico—all with 0.8 percent—followed by Texas and Florida with 0.7 percent, according to the study.

The highest percentages of adults identifying as transgender per state were found in Hawaii, California, Georgia, and New Mexico.

Five states were found to have the lowest percentages of transgender-identified adults, all with 0.3 percent: North Dakota, Iowa, Wyoming, Montana, and South Dakota.

Young adults are most likely to identify as transgender, the researchers say, citing the 0.7 percent of adults ages 18 to 24 who do so.

To compile their results, researchers at the Williams Institute at the UCLA School of Law drew on data from the U.S. Census Bureau’s American Community Survey as well as from the Behavioral Risk Factor Surveillance System, which includes representative surveys of the 50 states, the District of Columbia, and U.S. territories.

In related news—saying it’s the right thing to do, Defense Secretary Ash Carter announced last month that transgender people will be allowed to serve openly in the U.S. military, ending one of the last bans on service in the armed forces.

“Americans who want to serve and can meet our standards should be afforded the opportunity to compete to do so,” said Carter, laying out a one-year plan to implement the change. “Our mission is to defend this country, and we don’t want barriers unrelated to a person’s qualification to serve preventing us from recruiting or retaining the soldier, sailor, airman, or Marine who can best accomplish the mission.”

Under the new policy, by Oct. 1, transgender troops already serving should be able to receive medical care and begin formally changing their gender identifications in the Pentagon’s personnel system. And, a year from now, the military services will begin allowing transgender individuals to enlist, as long as they meet required standards and have been stable in their identified genders for 18 months.