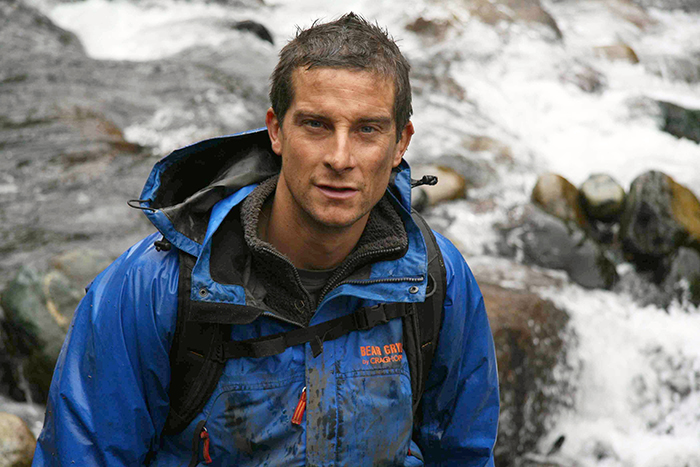 “Running Wild with Bear Grylls?” Doesn’t that sound a little kinky to you? Turns out that Bear is a survivalist type guy who has a reality show where he eats bugs and entertains viewers with his wilderness skills and Barack Obama is going to join him on an upcoming show in order to illustrate the dangers of climate change.

What can we say about Kim Davis, the sanctimonious clerk in Kentucky who is defying the Supreme Court by refusing to issue marriage licenses to gay or straight couples? Hey. She’s not just defying the High Court’s marriage ruling. She’s defying an order from a federal court directed at her personally, one that was confirmed by the justices. By the time you read this, she will probably have been assessed various fines for contempt of court, and I will bet you dollars to cocktails that far right religious people will be raising boatloads of dough on line in order to pay her court costs. (I get the cocktails if I win.)

The good news, in my view, is that Kim Davis is a very unsympathetic figure, and will not look attractive in the glare of the national media spotlight. She’s mean. She has a mean little look and says mean nasty things. Plus, she’s been divorced at least once if not twice or three times, so her self-proclaimed allegiance to God is, let’s say, discretionary.

Finally, although Americans are generally in favor of small business people who don’t want to celebrate same-sex marriages (wrongly so, I might add), they are not supportive of government officials who use their personal faith to decide which taxpayers are entitled to which public services. If we have to fight one of these religious wars, we might as well face the unpalatable Kim Davis.

Am I the only one who didn’t instantly recognize the name “Bear Grylls?” To be honest I wasn’t even sure this was a name, per se. I mean “Running Wild with Bear Grylls?” Doesn’t that sound a little kinky to you? Turns out that Bear is a survivalist type guy who has a reality show where he eats bugs and entertains viewers with his wilderness skills and Barack Obama is going to join him on an upcoming show in order to illustrate the dangers of climate change. Well, why not?

Speaking of sex, many people were dumbfounded when the New York Police Department and a bunch of thugs from Homeland Security raided the offices of rentboy.com and arrested a half dozen of the company’s executives. The agents announced, gasp, that there was gambling going on at Rick’s cafe! An “online brothel” in their words, yet one that has operated without comment from law enforcement since 1997.

It’s pretty obvious that the escorts on rentboy offer a wide range of services, shall we say. It’s also clear that neither the men nor their clients are particularly coerced. This is a harmless operation, a victimless crime that seems to have little to do with the national security threats that we thought Homeland Security was targeting. This is not to say that the sex trade in general is nothing more than business as usual. It has a very dark side indeed, but our rent boys did not appear to operate in those shadows. Plus, they’re gay! Why shut down the gay guys? Why not pick on some straight site?

So this morning I clicked on a link to a story about two gay brothers in organized crime who had an incestuous affair, and eventually decided the item didn’t rise to the high standards of this column. But while I was at it, I found a sidebar about a woman who had sex with a dolphin named Peter. I even copied a quote out of that item: “It was sexual on his part,” she said, “it was not sexual on mine, sensual perhaps.” Hmmm. Perhaps.

But wait. That piece referred to another fish story, a romance between a man named Malcolm Brenner, now in his mid-sixties, who had something going on with a dolphin named Dolly in a Florida park back in 1971. Brenner said Dolly “came on” to him, and that they would wait for her mate to be put back in his pen before indulging themselves.

And yes, I know that this has little or nothing to do with GLBT news. OK, fine. It has nothing to do with GLBT news. But it’s interesting, n’est-ce pas? Sometimes I wonder what life will be like in a hundred years, and I think back to 1915 and wonder if people back then wondered about life in 2015. I’m sure they did. This is just to say that I believe we will be able to converse with dolphins by 2115. At which point we can get Peter and Dolly’s viewpoint on these relationships.

One thing I’m sure of. All cars all be self driving and people will look back and shudder at the idea of hundreds of cars racing down the Interstate at 75 mph right next to each other with individuals at the wheel, many of them drunk, texting, singing and eating. Road trip!

True confession. I once took a summer road trip from Connecticut to Austin wearing a bikini and steering with my feet on cruise control while my friend fixed gin and tonics in the passenger seat. We’d stop briefly at motels where I’d dive into the pool and she would get more ice. This was years and years ago, back when driving while intoxicated was amusing.

Guess what? The Faroe Islands are about to vote on marriage equality. I think by the time you read these words the vote will be over, so you can learn the outcome right away. I gather the islanders really enjoy killing whales, so frankly, I don’t care what happens to them. Go ahead and vote against marriage equality. Bunch of murderers.

I can also tell you that Pope Francis did not endorse a gay friendly children’s book. One of his aides sent a nice reply to a letter from the lesbian author of Piccolo Ouvo that included a boilerplate papal blessing at the end. But the blessing was directed towards the lesbian letter writer, not towards her book. Meanwhile, that book and another like it have been banned from school libraries by the new conservative mayor of Venice, Luigi Brugnaro. Brugnaro originally banned several dozen gay friendly kids books, but after an outcry he cut the blacklist to two, including Piccolo Ouvo, “Little Egg,” the story of an egg who encounters different types of families on its journey.

There’s something jarring about the idea of a conservative mayor of Venice. Not sure why. And speaking of the Pope, I read that he thinks women who have had an abortion can be forgiven by priests. But only for a special jubilee “year of mercy” that runs from December 8 to November 20.

Say what? First, that’s not a full year. Second, what happens to women who have had an abortion after the time period is over. And third, why not forgive lesbians and gay men for their alleged “sins?”