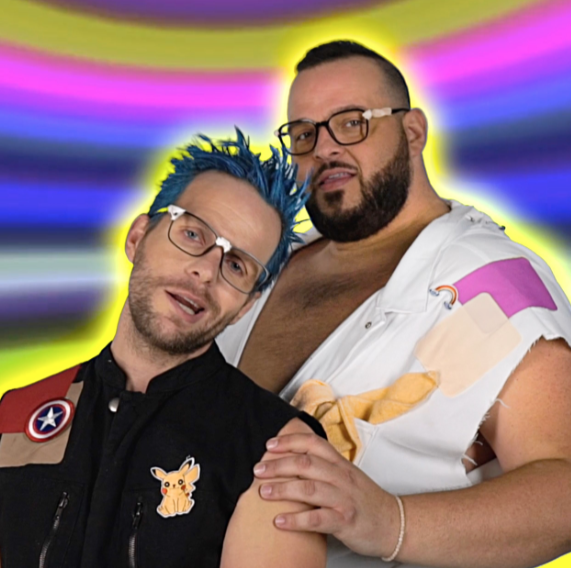 Last summer, Tom Goss paid homage to the subset of plus-sized gay men that enjoy superheroes and video games with his smash anthem, “Nerdy Bear.” Now he returns with “Nerdy Bear: The Markaholic Remix,” a reinterpretation of the song from the bear’s perspective, featuring brand-new rhymes by the gay community’s ultimate nerdy bear, Mean Girl and Looking actor Daniel Franzese.

“The remix was my idea,” says Franzese. “When Tom’s original came out last summer, I was like ‘OMG, it’s about time we got an anthem of guys pursuing us in song. We should do a remix of this track where the bear responds that he’s down to party—and I should rap on it!'”

Tom Goss’s “Nerdy Bear: The Markaholic Remix (featuring Daniel Franzese)” is available on iTunes, Spotify and all major digital platforms. Its music video will release on YouTube Monday, May 17.

The friends have worked on several projects together over the past few years.  Most notably, Franzese played Tom’s husband in a series of videos from the singer’s Territories album. “It’s always fun to work with Danny and at this point it seems like we’re just making up opportunities to work together,” Goss laughs. The original “Nerdy Bear” is a pop track, with a big, snappy sound, an infectious melody, and a sultry R&B vibe. The remix—by LA-based producer Markaholic (RuPaul, Trixie Mattel, Willam Belli)—raises the BPMs and adds slick and seductive rhymes written by Franzese. He wittily weaves explicit sexual connotations into many of the popular arcade games from the 80s, as in: “If you like whips and chains, we can do the Double Dragon,” referencing the martial arts game. He continues with “I’ll follow you down your Oregon trail and hitch on to your wagon.”

He makes similar playful associations with the shapes from Tetris, the cherries in Pac-Man and the mushrooms in Mario Brothers. The idea is not just about getting laughs; it is meant to convey the confidence Franzese and others in the gay bear community have built by not only accepting their girth, but embracing it. “It’s fun to find unique ways to amplify body positivity and happiness,” says Franzese.

Michael Serrato (Big Gay Sketch Show, Neil’s Puppet Dreams), Goss’s long-time collaborator, who directed the original “Nerdy Bear,” returns to direct the remix version. “I always love the movement and cheekiness Michael brings to a project,” Goss reflects. “He can always make me smile.” Goss brings a few smiles of his own in the video, debuting his stripper moves.  He’s not quite sure where he learned them. “I guess years of taking off my clothes to try to get people to listen to my music,” he jokes.

Tom Goss was 22 and in seminary, training to be a Catholic priest, when he realized his strong attraction for plus-sized men, known as “bears” in the gay community, and nerdy ones to boot. “‘Nerdy Bear’ is authentic to my experience and relays my unique perspective that beauty doesn’t fit a standard mold,” he says.

Tom Goss’s “Nerdy Bear: The Markaholic Remix (featuring Daniel Franzese)” is available on iTunes, Spotify and all major digital platforms. Its music video will release on YouTube Monday, May 17.