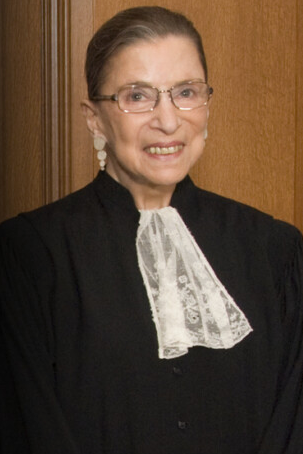 Justice Ginsburg has long been on the right side of history in the fight for LGBTQ equality, writes the Human Rights Campaign.

Justice Ginsburg joined Justice Kennedy’s majority decisions in many landmark cases in LGBTQ civil rights history, including Romer v. Evans in 1996, Lawrence v. Texas in 2003, Windsor v. U.S. in 2013 and Obergefell v. Hodges in 2015. In addition, she joined the majority in Bostock v. Clayton County in 2020. In her private life, Justice Ginsburg has performed many same-sex marriage ceremonies — the first Supreme Court justice to do so.

“With millions of Americans, we mourn the death of Justice Ruth Bader Ginsburg. From her time as director of the Women’s Rights Project at the American Civil Liberties Union to her long tenure on the United States Supreme Court, Justice Ginsburg has been a mighty defender and beacon of civil rights and justice. She was a powerful champion of LGBT rights, including her most recent opinions in Bostock v. Clayton County, Georgia, in which the Court affirmed that anti-LGBT discrimination is a form of sex-based discrimination.

“The 300 gender discrimination cases which she fought as a lawyer, as well as the landmark opinions on gender and sexual orientation which she made as a Supreme Court Justice, are the cornerstones of her lifelong career. From her proudly-worn ‘dissent collar’ to her quite literal and fiery dissent in 2013 on the Court majority’s gutting of the Voting Rights Act, Justice Ginsburg has been a pillar of civil liberties and human rights. Her presence on the bench, in the movement, and in this world will be sorely missed.

“Rest in Peace, RBG… we—and the world—lost a true giant.”