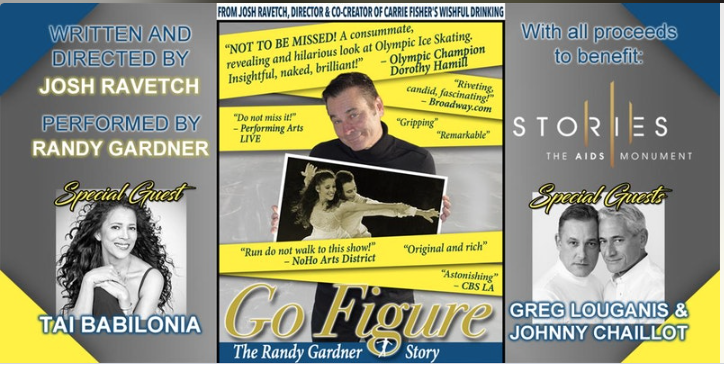 Figure Skating Icon to Perform Autobiographical  One-Man Show as Fundraiser for the
Foundation for The AIDS Monument, Sat., Jan. 6. Event Will Be Hosted by Olympian Greg Louganis

The City of West Hollywood co-sponsors the Foundation for The National AIDS Monument presentation of Go Figure! The Randy Gardner Story, an autobiographical one-man show in which figure skating icon Randy Gardner discusses his personal and professional life, as part of a fundraising event for the National AIDS Monument, which will be installed in West Hollywood Park.

The fundraiser, which includes the play and a reception hosted by Olympian Greg Louganis and his husband, Johnny Chaillot, will take place on Saturday, January 6, 2018 from 7 p.m. to 10 p.m. in the City of West Hollywood’s City Council Chambers/Public Meeting Room and inside the West Hollywood Library, located at 625 N. San Vicente Boulevard.

The play, which is co-written by Gardner and Josh Ravetch, and is directed by Ravetch, features Gardner discussing his personal and professional life, including his shocking and surprising story as he was on the way to winning the World Championships in pairs ice skating.  He will talk about his lifelong skating partner, Tai Babilonia, and their skating careers and personal lives. Having met when they were children, Gardner and Babilonia together won five U.S. Figure Skating Championships, one World Figure Skating Championship, went to the Olympics, and performed in the Ice Capades. Together they endured her struggles with addiction and his living as a closeted gay man.  Babilonia will attend the event and will join Gardner on stage.

Tickets for the fundraiser, which include the performance and a reception, are $75 for general admission and $125 for VIP admission.  Sponsorship opportunities are also available.  To purchase tickets or become a sponsor, please visit: bit.ly/GoFigureJan6.