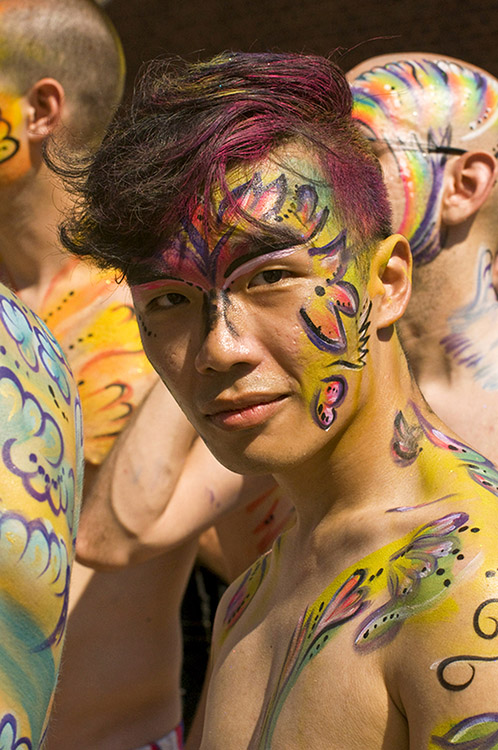 “Gay pride is the antithesis of gay shame… We’re not proud of being gay, per se. We’re rejecting society’s disdain, a disdain that heterosexuals have not experienced.”

THERE WILL COME A TIME

I couldn’t help but notice that you FIGHT readers showed your Pride early this year in solidarity with a national day of Trump protests on June 11. Well, they don’t call it Pride month for nothing, although I prefer to celebrate on the traditional last Sunday in June myself.

I was reading up on Pride the other day and saw that early activists were torn between calling it gay “pride” or gay “power.” But there should be no debate. The men and women who fought back at the Stonewall Inn were sick, not just of being subjected to police raids, but they were sick of being ashamed of who they were. Gay pride is the antithesis of gay shame, and that’s why it makes no sense when people pop out of the woodwork to embrace “Straight Pride.” We’re not proud of being gay, per se. We’re rejecting society’s disdain, a disdain that heterosexuals have not experienced.

Obviously, Pride has evolved over the decades from defiance to celebration. But it’s ironic, isn’t it, that the welcome decline of antigay sentiment will slowly ease the tension that we’ve long used to galvanize our annual revelry. We’re not there yet. And the Trump administration’s conservative swing has reminded us that our struggles for civil rights are far from over. But there will come a time when no one quite remembers what we’re celebrating or why.  Kind of like June-teenth or Cinco de Mayo or St. Patrick’s Day.

Don’t worry. We’ll still be having a blast.

The Supreme Court has yet to take a stand one way or another on the Colorado bakery case, Masterpiece Cakeshop v Colorado Civil Rights Commission. The case, appealed to the High Court by a baker who was fined for violating the Ski State’s ban on sexual orientation discrimination, is now enjoying the second longest period of limbo in High Court history. Week after week, the justices have scheduled the petition for discussion, but they have not rejected it. Instead, they just list it for the next conference agenda. No one knows what’s going on!

I know I have returned to this topic again and again, but the mystery just deepens. For a time, people thought the Court was waiting for Justice Gorsuch to join the bench and have a chance to weigh in. But he’s been seated for a couple of months now.

Other people suggest that the Court has rejected the case, but is waiting for a justice or two to write a dissent. Normally, petitions are accepted or rejected without comment, but sometimes a justice will explain why he or she disagreed with the others. But this theory has the same problem as the first. Why would it take months to present a few objections?

Finally, it’s possible that the Court is waiting for a similar (florist) case out of Washington State, which is expected to be appealed to the nine justices in July, and which could be combined with the Colorado litigation. We will see.

THE FIGHT’s legal analysts want both the Colorado and the Washington cases to be rejected. We are likely to see a Title VII workplace discrimination case reach the Court next year, and a win there will be critical. Without belaboring the legal rationale, we are far more likely to get a clean victory in a “religious freedom” case if the Court has already ruled that discrimination against the LGBT community is impermissible.

I just saw an interesting article about the latest LGBT fun facts from Pew Research. First, it looks as if our numbers are increasing, which suggests that more people are comfortable telling the surveyors that they’re gay or lesbian. We’re up to about 10 million Americans, or roughly 4.1 percent of the population. After the 2000 election, exit polls showed gays and lesbians comprised about 4 percent of the electorate, while other research indicated our community voted at a rate of 80 percent, which would have put our overall percentage below 4 percent although transgender voters weren’t included in those exit polls. (I’m not sure I believe that 80 percent figure, but if true, Republican gays and lesbians elected George Bush. Thanks guys.)

The other notable trend, according to a 2016 Gallup poll cited by Pew, is that the percentage of LGBTs drops significantly by age. Some 7.3 percent of those aged 18-36 identify as LGBT, versus 3.2 percent of 37-51, 2.4 percent of 52-70 and 1.2 percent of people over 70. I think we all know what’s going on here. Get with the program Grandpa! Times have changed.

As for LGBT popularity, in 2016 some 63 percent of Americans thought homosexuality should be accepted by society, compared to 51 percent in 2006. That’s quite an improvement, but I’ve always found this question a little dispiriting. That’s a pretty large subgroup still hesitating to support gayness in general, let alone LGBT rights. Do we have to wait another generation before we hit 80 or 90 percent favorability?

I’m briefly tired of gay news, but I still feel like writing to you! Let me complain about a recipe for a Negroni popsicle in my local paper this morning. First, the directions call for two cups sugar water, one fourth cup gin, one fourth cup Campari, one fourth cup vermouth. Why waste good booze by diluting it to this extent? Second, no one makes a Negroni with equal amounts of gin, vermouth and Campari, let alone with sugar water. Basically, you make a gin martini on the rocks and top it off with Campari. And finally, why in God’s name would you turn a perfectly delicious cocktail into a popsicle to begin with? Was the food section editor under a deadline? Had she had one too many Negronis?

Also, for various reasons I use my FIGHT deadline as the monthly date for giving flea medication to the cat and dog. The dog eats hers in pill form, but the cat needs to be dosed on the back of the neck with some extremely expensive product that the vet counter person talked me into buying. Well, it turns out the cat doesn’t like this flea stuff, and she goes ballistic when she sees it or when I touch her neck. Since each tiny tube cost almost $15 there’s no way I’m letting her get away without her monthly “Cheristin.” But it’s nearly impossible to apply so I spend several days feeling anxious because this is on my mental list of things to do and it’s so hard!

She disappeared completely after I opened the tube just now. She’ll be gone for hours.

DYKE TO WATCH OUT FOR

So, what else is new you ask? We may have a lesbian Prime Minister of Serbia, a locale not known for its progressive LGBT policies, and a lesbian not known for any particular activism. Appointed by President Aleksandar Vucic, Ana Brnabic might have a tough time winning confirmation from a somewhat homophobic parliament.

Six out of 21 members have resigned from the Presidential Advisory Council on HIV/AIDS noting that the Trump administration has zero interest in their mission, and that the attack on Obamacare (if successful) will devastate people with HIV.

And a gay conservative who once edited the Advocate explained to Tucker Carlson that a one-year vigil for the victims of the Pulse nightclub was hijacked by anti-gun activists. “Most gay people aren’t political,” Chadwick Moore told the Fox host. “Most gay people, you know, they care about pop music and going to the beach. They probably don’t know what the Second Amendment is. And so they show up to be together, to celebrate the community, to mourn together and instead they are fed this anti-gun nonsense.” Some gay people took off their earphones and rolled over on their towels long enough to object to Moore’s generalization. He later tweeted: “It’s a family show, so I couldn’t say “dick and meth.”’

There’s a reason political partisanship has become the great divide in this country.