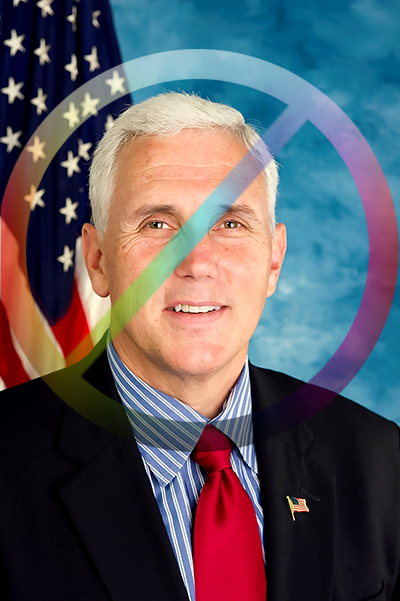 Here’s why Trump’s VP choice Mike Pence is awful for the LGBTQ community.

After criticism from the business community, Pence signed an amendment to the law intended to protect gays and lesbians.

But it was not his first brush with criticism from the LGBT community, explains Will Drabold from time.com.

A self-described “Christian, a conservative and a Republican, in that order,” the former member of Congress was a prominent conservative figure in battles over marriage equality and equal rights in the last decade.

Here are some of the statements and positions Pence had has related to LGBT issues.

In 2006, as head of the Republican Study Committee, a group of the 100 most-conservative House members, Pence rose in support of a constitutional amendment that would have defined marriage as between a man and a woman. Citing a Harvard researcher, Pence said in his speech, “societal collapse was always brought about following an advent of the deterioration of marriage and family.” Pence also called being gay a choice and said keeping gays from marrying was not discrimination, but an enforcement of “God’s idea.”

He opposed a law that would prohibit discrimination against LGBT people in the workplace.

The Employment Non-Discrimination Act would have banned discrimination against people based on sexual orientation. Pence voted against that law in 2007 and later said the law “wages war on freedom and religion in the workplace.”

More than 20 years after the bill was first introduced, the Senate approved the proposal in 2013, but the bill failed in the House.

He opposed the repeal of Don’t Ask, Don’t Tell.

Pence favored the longtime military policy of not letting soldiers openly identify as gay. In 2010, Pence told CNN he did not want to see the military become “a backdrop for social experimentation.” The policy ended in 2011.

In 2000, when Pence ran for Congress successfully in Indiana, he proposed that Ryan White Act Money intended for organizations providing HIV/AIDS care be redirected from organizations that support LGBT rights to “those institutions which provide assistance to those seeking to change their sexual behavior.”

He rejected the Obama administration directive on transgender bathrooms.

In May, the federal government directed school districts to allow students to use the bathroom of the gender they identify with. The directive came as criticism crescendoed around a North Carolina law that would have restricted the use of bathrooms.

Along with many other conservatives, Pence opposed Obama’s directive and said it was a state issue. “The federal government has not business getting involved in issues of this nature,” Pence said.