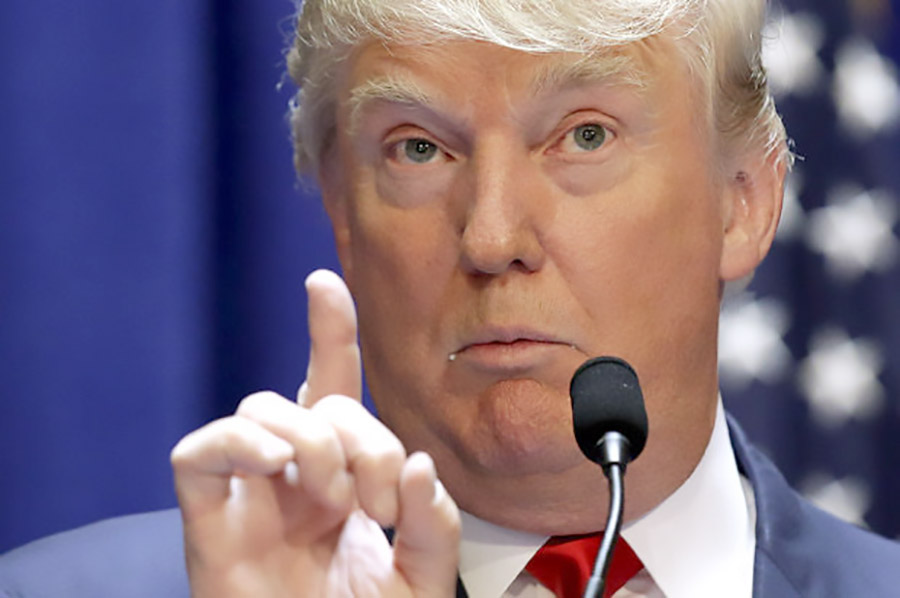 Only a veteran LGBT writer can get away with saying this, but have any of you noticed that Donald Trump is limp-wristed? I’m not using that as gay slur. I mean it literally. He flaps his wrists loosely and bends them backwards in a manner that perfectly fits the old stereotype. Does this quirk have any significance? What if you consider the Liberace hair style?

Before we delve into serious news, have you heard the heartwarming story of the Safari park tiger in eastern Russia? The tiger, Amur, is fed live animals on a daily basis. A little while ago, however, the tiger refused to eat a proffered goat, and instead the two animals became best friends. They walked around together in the enclosure, and Timur the goat even took over Amur’s protected sleeping hut, leaving the tiger to sleep on the roof. When the two were briefly separated, Amur reportedly roared with sadness. And, as a result of the odd friendship, the keepers started feeding Amur with rabbits instead of goats, presumably to avoid confusion between the pair.

Not only does this story provide us with yet another glimpse into our impoverished understanding of animal emotions, but it has a gay angle. No, the creatures are not gay, but a Russian lawyer has asked authorities to ban media coverage of the charming phenomenon based on the idea that the attention represents “covert gay propaganda” given the non-traditional nature of the relationship. Seriously, my friends!

For the moment, Timur has been removed for a medical checkup. The safari park staff also worries that Amur might reconsider his taste for Timur once he enters mating season. Let me just add that if they put Timur back in the enclosure only to be eaten by Amur, and then write about it, I will cancel my subscription to the Moscow Times.

And now some serious news indeed, namely the hateful and near violent protest against two LGBT Jewish organizations trying to hold a reception at the Task Force‘s Creating Change conference in Chicago.

Based in the Bay Area, A Wider Bridge seeks to encourage ties between gay communities in the U.S. and Israel. Jerusalem Open House, in turn, is one of Israel‘s main LGBT rights groups, and for the record, a strong supporter of Palestinian gays as well. The reception, held in the context of arguably our country‘s most politically correct left leaning activist group, drew some two hundred angry young protestors claiming that Israel‘s good record on gay rights is little more than a smokescreen to hide their oppression of Palestinians.

The demonstrators blocked access to the reception, some chanting the slogan that calls for the destruction of Israel: “Palestine will be free from the river to the sea.“ One of the leaders is heard of video calling out: “We‘re going to challenge these Zionist racist motherfuckers!“ Some participants trying to access the reception were crowded and pushed. Eventually, the Jewish groups had to abandon the event.

As I wrote elsewhere this week, I don‘t believe the under-thirty screamers in the nasty crowd were anti-Semitic. I think they were oblivious and restless, happy to be part of a protest and easily swayed by its righteous veneer. Who doesn‘t share concerns for the Palestinians in this decades-long conflict? We all do! But most of us do so in the context of Israel‘s fight for existence and survival in a world infused with hatred for Jews. Indeed, in a world where not so long ago six million Jews were murdered and many more saw their lives shattered and homes destroyed.

The 20-something LGBT activist has come of age at a time when injustice is in the air but when it seems they‘ve missed all the action. Stonewall was nearly half a century ago. The AIDS crisis and ACT UP peaked before they were born. Sodomy laws were revoked when they were children. Marches on Washington are a thing of the past. Dozens of antigay referendums were fought as they struggled through middle school. Marriage equality was debated for decades without their voices and achieved before they had a chance to weigh in.

For them, the Holocaust might as well be the Civil War. In other words, they are young. But they are also politically immature, deaf to history and seemingly lack the ability to make individual judgments. Pack mentality has always worked for our community because after all, we were all fighting for equal rights and we were all united by our refusal to follow gender norms. But what are we fighting for now? If the next generation doesn‘t have a clue, perhaps everything, perhaps nothing, perhaps both.

Well that was uplifting n‘est-ce pas? In fact, we still have a LGBT agenda, even if it lacks the focus and excitement of marriage equality.

For one thing, we have dozens of antigay legislative proposals, ranging from a bill to ban marriage licenses to people with HIV in Oklahoma to a law that would prohibit ferries in Washington from flying the rainbow flag. Oh, and then there are quite a few versions of the religious freedom bills that would allow private businesses to discriminate against gays and lesbians, including a new one in Indiana, which will probably come to naught.

In fact, I‘m not even really covering these antigay efforts because most if not all of them are being greeted with strong opposition from corporations and pragmatists. I‘ve seen bunches of alarmed emails about the Indiana bill which recently passed muster in a senate committee, but it looks as if the Speaker of the House will kill it if it reaches his chamber.

My policy is to ignore these developments unless and until they actually come close to passage because keeping up with them as they rattle around the various statehouses is tedious. That said, there are several bills calling for school kids to use the bathroom that matches their gender at birth, a mandate that would actually force masculine FTM teens and feminine MTF students to share the facilities with girls and boys respectively. By law! Do any of these lawmakers actually think about the repercussions of their proposals?

I don‘t care that much but if pressed, I actually prefer to limit the ladies room to ladies, and don‘t particularly want transmen lumbering around the sinks. Transwomen would be most welcome of course. I think most people of both sexes agree, and I would love to see some of these rightwing legislators try to pee while a trans babe fixes her makeup two feet away.

I know I‘ve said this before.

So, I’m jealous of you readers, because unlike me, you know a) who won the Iowa caucuses, and probably b) who won New Hampshire. I’m still in the dark, and I also can’t decide who I want to win the early Republican contests.

My main desire is for the party to wind up in Cleveland without a nominee, and subsequently engineer a divisive, controversial and chaotic procedural mess that results in Trump winning. I then want them to endure a crushing defeat, lose the Senate and degrade and/or sacrifice their House majority.

Is that so much to ask?

By the way, only a veteran LGBT writer can get away with saying this, but have any of you noticed that Donald Trump is limp-wristed? I’m not using that as gay slur. I mean it literally. He flaps his wrists loosely and bends them backwards in a manner that perfectly fits the old stereotype. Does this quirk have any significance? What if you consider the Liberace hair style?

Look, if he were secretly gay we’d know about by now, so I’m not suggesting that. I’m just making an observation. He’s a straight guy but there’s a touch of swish.

Finally, on a personal note, I want all of you to tune in to House Hunters International on HGTV on February 11. My step children, Sarah Zipp and Aaron Zipp moved to Amsterdam with our two granddaughters and they’re on the show!