The MORE You Know | The Fight Magazine 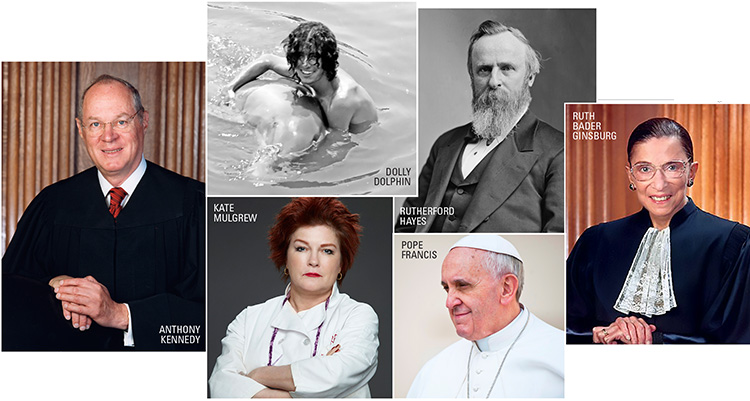 Don’t you hate end of year tests and reviews? Yes, me too, with the salient exception of my own clever version of the genre. I started this annual quiz in order to carve out time for myself over Christmas and New Years, but it turns out the damn thing is far more labor intensive than writing a column. Now, however, tradition has set in and I am committed to the yearly exercise.

1. In Obergefell v Hodges, Justice Kennedy ruled that: a) the Equal Protection Clause requires same-sex couples to be treated the same as heterosexual couples as far as marriage is concerned. b) Same-sex couples have a fundamental right to marry under the Due Process Clause. c) Sexual orientation discrimination must be evaluated using heightened legal scrutiny. d) Laws against same-sex marriage comprise an unconstitutional form of sex discrimination. e) All of the above.

2. Ruth Bader Ginsburg said she fell asleep during the State of the Union speech because: a) she stayed up all the previous night writing an opinion since she had a “hot pen.” b) She was taking medication for tinnitus. c) She drank too much at dinner with Justice Kennedy. d) President Obama employed a “hypnotic cadence.”

3. According to an Eighth Circuit ruling last January, a woman who was constructively fired for pumping breast milk on the job had no case for sex discrimination because: a) Her boss was a lesbian. b) The majority of her colleagues were women. c) Her baby was in child care. d) Men technically have the capacity to lactate.

4. Judgment call. The 2015 hypocrisy award, men’s category, goes to: a) The former conservative Speaker of the House, Denny Hastert of Illinois, who abused a student when he was a wrestling coach at Yorkville High School. b) Matthew Makela, the right wing Michigan pastor and father of two who told the guys on Grindr that he liked to cuddle naked. c) Boyd Holder, of Kingsport, Tennessee, who embezzled $100,000 from his church and was caught having gay sex in a van. d) Todd Courser, the married first term tea party Michigan state representative who fabricated a gay sex scandal in order to divert attention from the affair he was having with an also-married female colleague. e) Randy Boehning, the antigay North Dakota state representative who was caught sending selfie dick pics to other men.

5. True or False. We learned this year that: a) Doctors in the 19th Century recommended cocaine as a cure for lesbianism. b) Marilyn Monroe had seven toes on her left foot. c) Kate Mulgrew of Orange is the New Black came out of the closet. d) A California man filed a ballot initiative that called for gays and lesbians to be put to death. e) The Russian iPhone’s version of Siri refuses to answer questions about anything gay. f) Pope Francis bought a copy of “Poco Ouvo,” a children’s book, written by a lesbian, that tells the story of a little egg who meets different types of people and families. g) Rutherford B. Hayes, our 19th president, was bisexual. h) Archaeologists in the Czech Republic discovered the earliest known grave of a gay man, dating from 2900 to 2500 BC.

6. In which of these localities was marriage equality not legalized in 2015? a) Scotland. b) The Faroe Islands. c) Chihauhau, Mexico. d) Guam. e) The United States. f) Transylvania. g) Pitcairn Islands. h) Ireland.

7. Last year, we learned about a dolphin named Dolly, who reportedly: a) Had a sexual affair with an author in the 1970s. b) Helped a pregnant woman give birth in mid-ocean. c) Fell in love with a female orca named Cindy. d) Saved the lives of two lesbians who were vacationing in Hawaii.

10. Aside from the High Court’s marriage ruling, the most significant gay rights development in 2015 was: a) Abandoning the fight for the Employment Nondiscrimination Act in favor of the Equality Act. b) The EEOC’s decision to interpret Title VII to ban sexual orientation bias in the workplace. c) The High Court’s decision to return visitation rights to a lesbian mother in Alabama pending further litigation. d) A New York federal court decision calling for heightened scrutiny of transgender discrimination. e) The national outcry, particularly from business leaders, that greeted an antigay religious freedom proposal in Indiana.