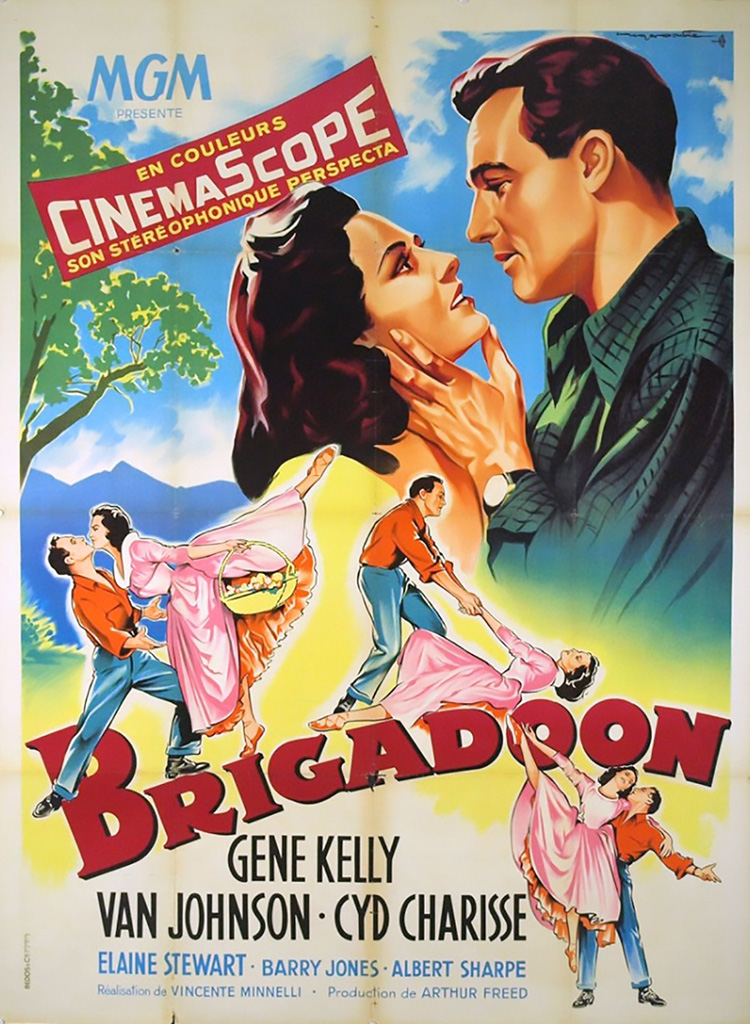 Ever seen Brigadoon? One of the 15 myths about gay men was the “myth” that my gay brothers are all experts on show tunes. And again, I know that’s not a myth, and I know that only age separates those of you who remember the Lerner and Lowe stage and screen classic from those of you who do not. Personally, I think of it every time I roam through a field of heather.

It’s official. We are entering the LGBT news dead zone, the final weeks of the year when for unknown reasons, a soporific holiday lull envelops our community and keeps us out of the headlines until early January. With the salient exception of 2013, when a federal court dismantled Utah’s ban on marriage and sent the equality ball on it’s final trajectory into the goal, December has been a lackluster month for transformative moments in our long march to civil rights.

It looks as if this year will be no exception. Take the Google gay news searches of the last few days. My favorite is from the Mirror’s web site, and reads: “Mum of two attacked Gay Village revellers with broom after legal high binge.” Legal high binge? Sounds like fun! (And where were the kids during this melee?)

You can also find a bunch of stories about antigay sentiment in Russia, an article about a pro hockey referee who is gay, items about antigay preachers, a list of 15 myths about gay men, and a piece about a married lesbian in Wisconsin who is getting pushback from the courts on her effort to clarify that she is the legal parent of their child (who was artificially conceived by her wife).

So why does this happen? Do our activists and political leaders just kind of shut down? Does the media put our stories on the back burner in favor of shopping crowds, recipe tips and the War on Christmas? Is it perhaps my own imagination? My own annual mental hibernation that blinds me to normally compelling community events and themes?

Now that I’ve written the above, be prepared for an onslaught of major gay news to inundate us just as this issue of THE FIGHT goes to press. And because I know you want to know, the mum of two was a 30-something woman named Rebecca Lowrey.

Lowrey went to a gay nightclub in Manchester last January, met a gay man and a woman, and wound up drinking all night and taking a drug called “bubble.” Later, the man put the moves on her, reportedly as a joke, and Lowrey turned on both of her new friends and whacked the stuffing out them with the aforementioned broom. She was recently given a suspended sentence and promised never to do such a thing in the future.

For your information, bubble is slang for mephedrone, and is also referred to as “drone,” “M-Cat,” white magic,” and my favorite, “meow meow.” Sadly, the cocaine-like substance is, in fact, illegal in the U.S.. We are stuck with booze.

Back to the High Court?

Normally, I do not like to regale THE FIGHT readers with yester-month’s news, the stuff that made headlines two or three weeks ago, which you probably read elsewhere and which is now sliding into a warm fog of obscurity. But beggars can’t be choosers, and unless you really care about Russia or, let’s say, the two champion divers who are boyfriends at the University of Miami, it is time for a look back. The divers are cute by the way, so you might check them out. Oh, and as for the myths about gay men, do you really think the notion that “gay men can’t help themselves from hitting on straight men” can rightly be called a “myth?” A generalization, maybe. Not every straight man warrants a second look.

So here’s a big deal. The Alabama Supreme Court, not known for its forward looking jurisprudence, ripped a page out of the Constitution, chewed it into a little ball, and spat it into the face of two women and their lawyers at the National Center for Lesbian Rights.

The women, known as VL and EL, were together for 17 years, during which time EL gave birth to three kids, two of them twins, all of whom were adopted by VL through the Georgia courts. The women moved to Alabama, broke up, and VL sued for visitation. Remember that VL is the legal mother of her adopted kids, right?

Wrong! Defying over two centuries of constitutional interpretation of the Full Faith and Credit Clause, the Alabama high court decided that its sister state misunderstood its own state law and that VL’s adoption should not have been granted in Georgia and was therefore not valid in Alabama. Under the Full Faith and Credit Clause, a state court judgment must be respected throughout the country, period, and may not be second guessed except by a federal court.

On November 16, the NCLR asked the U.S. Supreme Court to review the case, and to restore VL’s visitation rights at once while the litigation is pending. Once again, we await High Court action on a critical gay rights issue. I’m not sure how quickly the justices must reply to such a motion, but keep an eye out for some news from the Big Nine.

Come to Me, Bend to Me

I just checked Google to see if something earth shattering occurred in the thirty minutes since last I checked, and I was encouraged by the mysterious headline “Screening of Brigadoon addresses LGBT issues.”

Ever seen Brigadoon? One of the 15 myths about gay men was the “myth” that my gay brothers are all experts on show tunes. And again, I know that’s not a myth, and I know that only age separates those of you who remember the Lerner and Lowe stage and screen classic from those of you who do not. Personally, I think of it every time I roam through a field of heather.

You can imagine how intrigued I was to discover that there might be a gay angle to the haunting tale of the mystical (and musical!) town that comes to life only once every hundred years. Did someone perhaps produce a version where the two American men fall for each other and remain in Brigadoon to avoid the homophobia of the 1950s?

Or did I misread the headline, which actually referred to a screen of the youtube video “Bridegroom?”

Um, yes that’s what happened. Listen, those of us who remember Brigadoon cannot always see without reading glasses, so give me a break. Or give me a gay break as our generation used to say, for reasons that elude me at present.

Sing with me: What a day this has been! What a rare mood I’m in. Why it’s almost like being in love!

Speaking of aging, eyesight is not the only threatened human function. Memory goes too. I was just reading about actress Holland Taylor, who sort of came out of the closet the other day but sort of was never in the closet to begin with. I patted myself on the back at the news, because I had long known about Ms. Taylor’s orientation thanks to a buddy of mine who saw her enjoying what appeared to be a romantic liaison with another woman at a hotel bar.

Ha! I thought. Dan was right.

I subsequently reviewed Taylor’s filmography, or whatever it’s called, only to realize that it was not Holland Taylor who Dan saw at the bar, but Kate Mulgrew, the erstwhile Captain Janeway of the starship Voyager and currently the compelling Russian prisoner on Orange is the New Black. A quick check of Mulgrew indicates she is twice divorced, so Dan’s tip (in which he identified the actress as Captain Janeway and who I then mistook for Holland Taylor) must go back into the “who knows?” category.

I will leave you to chew on that, and to consider another one of the 15 so-called myths, namely that all gay men are gossips. Again. Not a myth. Who came up with these myths anyway? A bunch of PFLAG mothers?