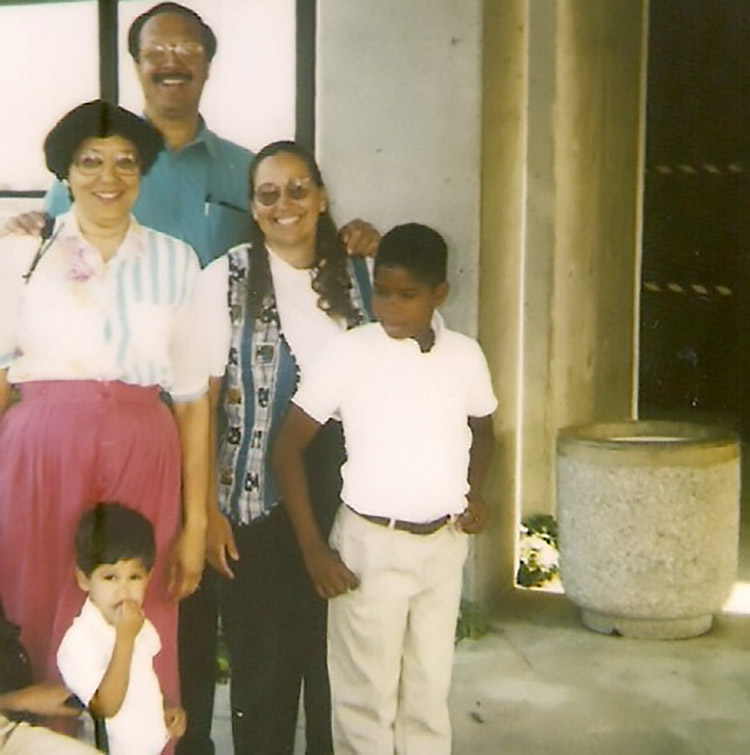 How one gay man’s guardian angels saved the day.

I was a six-year-old child raising my two-year-old and infant brothers. My mother was a drug addict and my father was no where to be seen.

I remember my childhood being a merry go-round of insecurity and change, not understanding what I was witnessing. A mother who slurred her words, a father who walked out on us, and an internal feeling that I was different, were the feelings I harbored and held inside.

Luckily, I had a guardian angel, two to be exact.

One day we were whisked away by Social Services and taken to the local police department. We were kept there until our grandparents arrived.

I do not remember the major details, yet my mother [grandmother] tells me about the phone call she received: “Ma’am if you ever want to see your grandchildren again, you need to get down here asap!”

After having raised a family of three my grandparents answered the call and decided to adopt myself and two younger brothers. This process is considered a “Closed Adoption,” when the biological parents have no contact with the adoptive parents or the child, and all records are sealed.

Through out the two-and-a-half years of my adoption process I was involved in decisions that would affect me—would I want to see my father when I came to court, did I want to live with my grandparents, were they taking proper care of me, was this a process I was okay with, and how am I doing.

I chose to never see my father nor my mother as my grandparents had primarily raised me since infancy. My mother only wanted me when she saw fit and father couldn’t care less.

These conditions caused me to have problems at school, bully kids, not listen to teachers, and get suspended. I had anger problems—I needed a coping mechanism to help me deal with my frustrations and feelings, without lashing out at people.

I found that music was my cure—it allowed self-expression without judgment, I wasn’t expected to look or act a certain way, just be willing to learn how to read, write, and play the music in front of me. It was love in a pure form.

My last few months of the adoption process were a little less rough, as my grandparents had been awarded custodial rights, and the process of severing parental right from my mother and father had begun. It was finally becoming a reality. Music has helped establish a means to cope and further help me grow. My caseworker and judge were delighted to see my sing and show my smiling face when I appeared, and my level of comprehension had grown.

Teachers no longer feared having me as a student, I mellowed out in my interactions with other kids, and could play on the playground without throwing the tetherball into someone’s face!

I remember the finalization; the day the adoption was complete and approved. I sat in the courtroom, staring at the judge, and nodding my head to everything he asked. He was actually speaking to my new “parents”, yet I was answering every question asked. He finally asked me, “Eric, are you ready to go home with your parents”, I yelled “YES” at the top of my little lungs! It was over: a two-and-a-half year journey had finally ended, at least the legal portion of it.

In my new home I had everything a child could want—every Nintendo system, roller blades, Game Boy, skateboards, and so much more. Yet the feeling of discomfort I once had as a little kid was still there. What was it? I was GAY! BOOM the world turned upside down!

It wasn’t until I came to terms with that one feeling of angst and discomfort, did I truly become at peace with myself and understand a lot more of the struggle through this adoption. Not only was I harboring the feelings I had about the situation, I was dealing with this feeling of “why do I not like girls” and “I love to vacuum and shop!”

Understanding that vital piece of information allowed me to grow even more, understanding myself, my desires, inspirations, and channel that into who I want to become.

The support received from friends and family helped me know I was loved, regardless of the situation I felt I was in.

Adoption affects the life of the adoptee and the adopter. Giving faith and hope to someone who felt they have nowhere to go and no one to love them is truly life changing.

Embracing that individual and opening your heart to them is a gratitude that cannot be measured in success or money.