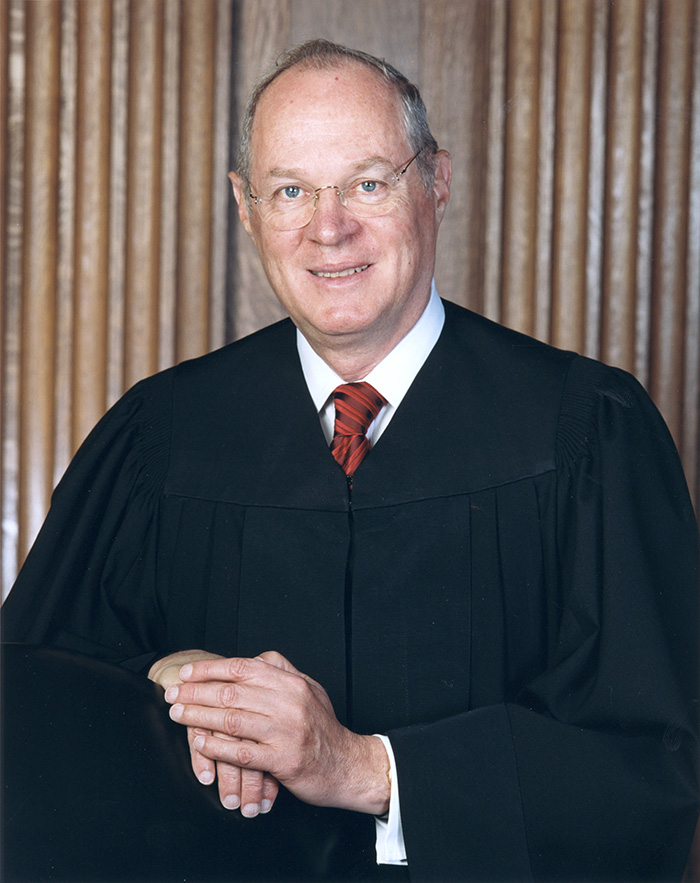 Justice Kennedy makes clear that sexual orientation is “immutable,” and he makes clear reference to the decades of irrational discrimination we have endured as a community. These are the main pillars of the analysis that would lead a court to call sexual orientation a protected class and to subject antigay laws to additional scrutiny.

Hello dear FIGHT readers! We won marriage equality, Yay! But we have not yet won “equality” unmodified: full equality under constitutional law, just like racial minorities, people of a particular faith, and women. Yet we have come close. There are clear indications in Justice Kennedy’s opinion that in addition to deserving marriage rights, our community should be treated like the other groups in our society who battle unwarranted prejudice. I would have been happier if he had spelled it out in no uncertain terms, but I’m still happy.

Forgive me if I’ve said this before, but the Supreme Court has previously ruled that the fundamental right to marry under the Due Process Clause covers deadbeat dads and incarcerated felons. Now, it covers us as well, which is great. Still, this rationale says nothing good about us per se. We’re right up there with Billy Bob and Charles Manson.

The good news is that Kennedy’s opinion went further than the Due Process Clause, touching as well on the Equal Protection Clause which is what we’re hankering for. I say “touching as well” because in typical Kennedy fashion, he wrote vaguely about a nexus between the two constitutional platforms, deliberately neglecting to employ the standard Equal Protection analysis expected under the circumstances. Indeed, he was roundly ridiculed by the Justice Scalia for sounding more like a fortune cookie than an appellate court.

Still, Kennedy makes clear that sexual orientation is “immutable,” and he makes clear reference to the decades of irrational discrimination we have endured as a community. These are the main pillars of the analysis that would lead a court to call sexual orientation a protected class and to subject antigay laws to additional scrutiny as is done with race, etc. True, Kennedy chose not to articulate our status further, but he put the pillars in place.

Also, without wading too deep in the weeds, I’d argue that the fact that Kennedy chose not to devote pages to our community’s standard of review under the Equal Protection Clause is a good thing. Often, courts like to finesse the issue of how to evaluate sexual orientation discrimination by ruling that a law is so bad that it’s actually unconstitutional under any legal test. Ergo, our hypothetical court continues, there’s no need to discuss the subject any further. The problem with this is that conservative courts simply note that the easiest legal test was used, and conclude that sexual orientation bias does not merit any heightened review. So it backfires. Far better, if you’re not going to give us heightened review, to leave it all grey without making any reference to the easy test. Does that make sense?

THE DISSENTERS & THE CORE DEFINITION OF MARRIAGE

As you probably know—all four dissenting justices wrote their own personal screeds decrying various aspects of the majority opinion. What struck me most, and what has also struck me in the reactions of the conservative right, is that these essays read as if the Court had abolished heterosexual marriage and replaced it with same-sex marriage. Hey, I agree! That would have been something of an unwelcome shock, upending tradition and stomping on the rights of everyone else on our behalf. But that’s not what happened!

The Chief, reflecting a bias so entrenched that he seems unaware of the pure prejudice that forms his view, kept harping on the notion that the majority “redefined” marriage. Sure, he agreed, marriage has changed over the decades to reflect women’s rights, recognize interracial unions, and so forth. But these modifications merely elaborated on the “core” definition of marriage as a union between a man and a woman. Hey Chief! What if the “core” definition of marriage is a loving commitment between two people? That’s certainly our core definition, indeed that’s our whole case.

This premise led dissenters to insist as well that if we “give up” the man-woman nature of marriage, there’s no reason whatsoever to limit marriage to two people! No reason except that the logistics of state-sanctioned marriage are built around two people. Fifty-fifty divorces, automatic inheritance rights, freedom from inheritance taxes, assumed parental rights, joint income taxes—how do you re-legislate the benefits of marriage for groups of three or more? You can’t. You’d have to devise an entirely new system, which is not to say it can’t be done. But is simply to say that the “slippery slope” has a lot of traction.

Add to that the main reason that marriage equality won’t lead to polygamy or worse: Do you see hundreds of thousands of polygamous families or hundreds of thousands of incestuous relationships? All begging for recognition? No. It’s just us for now, and if and when large chunks of the world embrace stable polygamy or incest and spend a quarter of a century crying out for recognition, we can discuss it further.

I’m writing just a few days after the June 26 opinion, so it’s too soon to say whether or not we will see anything more than token resistance to marriage rights. Of course we’ll see a sustained focus on “freedom of religion” from our adversaries on the fringe, so what else is new? As for the GOP candidates who are planning to ignore the ruling or “fight back” in some way, do they not know that the presidential oath of office contains only one sentence, worth repeating here?

What else is new? Oh, you know we don’t have the heart to meander through trivialities when we stand here on the penultimate peak of our relentless climb towards civil rights! I hope you noticed, however, that California Attorney General Kamala Harris managed to get a Sacramento judge to toss out the “Sodomy Suppression Act.” That was the ballot measure that called for putting gays and lesbians to death, a proposal that Harris would have been obliged to rubber stamp and formally name if the court had not come to her rescue. All you need is $200 to put something forward for the ballot, and even though this moron would not have gathered the required 366,000 signatures for approval, it was still galling to have him and his perverse ballot measure around.

I am writing to you from Amsterdam, where Mel and I were attending a kid’s birthday party in a park when we read the news (10am Eastern was 4pm Netherlands). We ran over to the nearest wine shop and bought a bottle of Bollinger, which we drank on the streets out of plastic cups. We are one of the 60,000 couples who married in the California window of 2008, but since we live in Texas we’ve been sadly unrecognized. Take that Lone Star State!

Oh, and speaking of my state, pastor Rick Scarborough, who told an interviewer he would “burn” if the High Court legalized marriage, now says he meant it metaphorically, which, frankly, was pretty clear to begin with even as the media made a big deal out of the threat. Scarborough later told the press: “We will ‘burn’ means that we will accept any sanction from the government for resisting today’s Supreme Court decision.”

What on Earth is he talking about? Since he is not a government agent of any sort, there’s no effective way for him to “resist” the decision, other than to oppose it, which is not illegal and which would not result in any “sanction.” Blowhards all.