Fitting In | The Fight Magazine 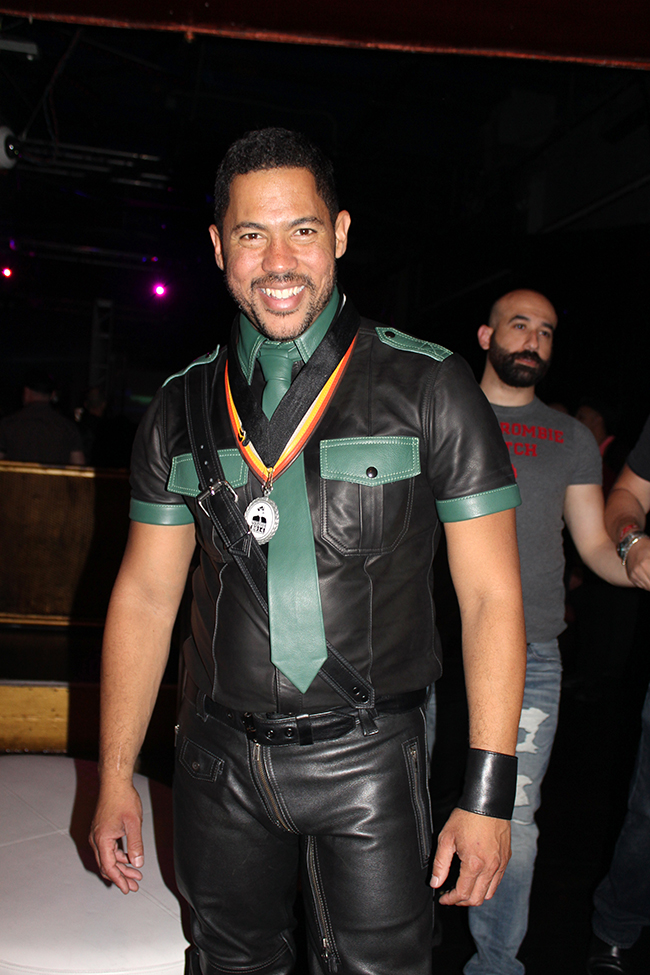 Mr. LA Leather Bear 2014 Gabriel Green on brotherhood, love and being a mentor.

Gabriel Green didn’t set out to compete and win the title of Mr. LA Leather Bear 2014, nor did he imagine he’d be first runner-up at the Mr. LA Leather contest shortly after, but that’s how it all went down for him this last year after he took a chance and tried something new. The leather community embraced him and he immediately found himself surrounded by a group of men who he now refers to as brothers.

A sense of brotherhood is definitely something Green values, as his own personal family life was traumatic, to say the least.

“I grew up in a single parent household, in Newport, Rhode Island,” reveals Green. “My mom raised me well, but she kicked out of the house when I was 18, after I came out to her.  Unfortunately she couldn’t handle it. She said, ‘You’re not my son anymore. You have to leave my house.’ She still maintains that today, and we haven’t spoken in 20 years.”

In an interview with THE FIGHT, Green talks about getting a new lease on life after a kidney transplant, the lessons he has learned about acceptance and why he sees himself as a chameleon.

When did you move to Los Angeles?

It was back in 2002. The job that got me out here was the Gay and Lesbian Center, which is now the Los Angeles LGBT Center.  I started working with homeless youth. I taught kids about HIV prevention and being safe on the streets. It helped me realize that my being kicked out had a purpose. I was there to teach these kids that they deserve love and they deserve to be who they want to be and no one should ever take that away from them.

How did you land in the LA Leather Bear Community?

My friend Matthew Mullins was doing the Mr. Regiment competition and I went there to support him. I found it all very interesting. I had never seen a leather competition before and then Leo Iriarte’s husband, Esteban Iriarte, approached me to tell me he thought I would make a great candidate for Mr. LA Leather Bear.

What made you decide to go for it?

I found out that I had kidney disease in 2005. I was told that I would have to go on dialysis, which I did for six years and then by miracle, I got a kidney transplant in 2012. It was life changing. I know what it feels like to think life is over, so when I got my health back, I decided to experience as much in life as possible and to grow. I remembered my kidney transplant and how I wanted to try new things, so I decided to compete.

What was it like winning the Mr. LA Leather Bear 2014 contest?

I was shocked. I thought my competitor was going to win, because he has more experience in this community. It was a surprise. Winning thrust me into the leather community, which I think is one of the most beautiful communities one can experience if you’re open to it. We’re often misunderstood as dark and mysterious, but you’ll find that there are a lot of people who are very loving, open and expressive about their sexuality.

All my life I’ve never known where I fit in. I kind of consider myself a chameleon. I have friends in the WeHo community, the leather community and pretty much everywhere. If you’re a cool person, I’m gonna hang with you. A lot of that stems from where I’m from, because culturally I’m black, but a lot of people didn’t see me as black enough or they thought I was too ethnic. They think I’m Puerto Rican or Dominican, but my breakdown is black-mixed with Cherokee, Mexican, Filipino and Irish, so there is a little Latino in there, but culturally, I identify as a black man. It came to a point where I decided I am me. If my version of blackness doesn’t suit you, sorry, but I’m gonna be myself.

How do you define being a leather bear?

If you want to go specifically with body type, you should probably have some body hair on you–unless you’re going for something like Alopecia Bear [laughter]. I think when it comes to the bear community, it doesn’t matter who you are or what you look like as long as you accept yourself and others and you are full of love. A love of food is good too. Don’t be ashamed to eat.

What was it like passing the sash to Frank Cavallo, Mr. LA Leather Bear 2015?

The year flew by. I felt sad and there was a sense of disbelief. Now I get to be in the mentor’s chair and even though my successor is older and he’s been in the leather community for 25 years, there’s a lot we can teach each other. I look forward to being a mentor.

Would you say that you are hooked on leather now?

I’m here to stay. The leather community has embraced me with love and given me so much joy. It is a community of freedom. I used my being a title holder as a platform to inspire others with the experiences I’ve had. Being kicked out of my house at a very young age and getting a kidney transplant has really given me a new lease on life, so my goal has been to say that even though life can be hard, sometimes you have to go through the rough stuff, so you can help others, but you have to keep going and be strong and be yourself. You will be okay, and with your experience, you can change the world.