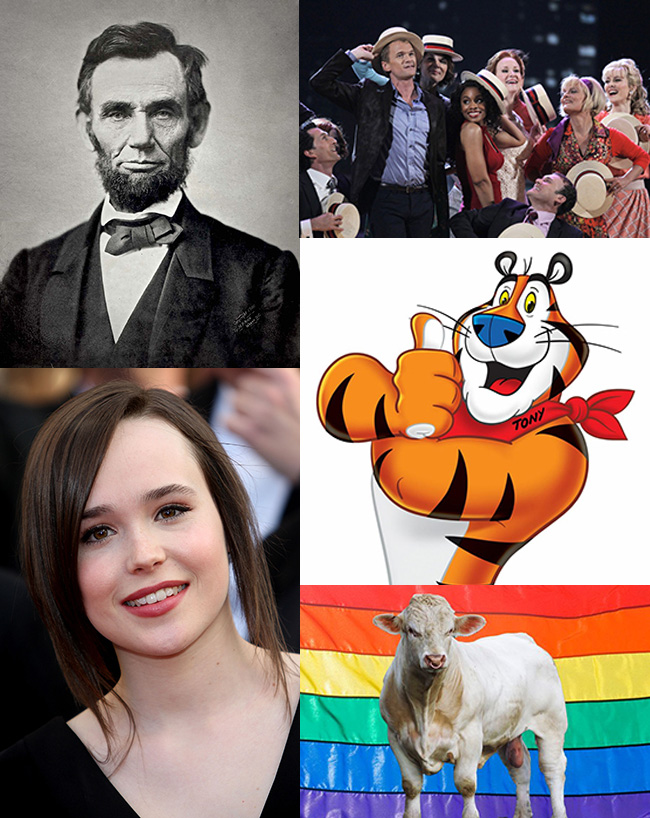 Happy New Year dear readers of THE FIGHT and welcome to our annual LGBT News Quiz! I was just glancing over last year’s quiz, and noticed the final question:

“The biggest GLBT news story in 2014 will be: a) the Supreme Court’s decision to let stand a 10th Circuit ruling in favor of same-sex couples, b) a well-known American athlete, in either football, baseball or basketball, coming out of the closet, c) the Supreme Court’s decision to accept a marriage equality case for the 2014/2015 term, d) the discovery of a link between homosexuality and high IQ levels, e) undeniable proof that Abraham Lincoln was gay, f) visitors from another planet who convince the world to come together in peace and end prejudice in all contexts.”

Who the Hell would have guessed the answer would be “a?” I know Michael Sam came out of the closet, but the man wasn’t exactly “well known.” As for “c,” it didn’t happen in 2014 as the quiz had predicted, but there’s still hope. The High Court will again consider whether or not to accept a marriage case during their January 9 conference. I think it’s common knowledge that gay men and lesbians are smarter than most and that Lincoln had a gay streak at the very least, but absolute proof eluded us last year. And we’re still waiting for the aliens. Maybe in 2015.

And now, to the quiz!

Q1. In Cameroon, a man was charged with the crime of sodomy because: a) He wore a chartreuse cummerbund to his sister’s wedding, b) He knew the entire score of “Company,” c) He enjoyed the occasional Bailey’s Irish Cream, d) He had an HRC equal sign sticker on his car.

Q3. Who on the following list did not come out of the closet in 2014? a) Ellen Page, b) Apple CEO Tim Cook, c) Lithuanian Foreign Minister Linas Linkevicius, d) Christian singer Vicky Beeching, e) Kellogg’s mascot Tony the Tiger.

Q4. A kickstarter campaign directed at our community is aiming to raise money for: a) A sanctuary for gay penguins, b) A coffee table book of vaginas illustrated by gay men, c) A forgiveness stone to be placed near the grave of Fred Phelps, d) A documentary about lesbian POWS in World War Two.

Q5.Some sorority girls at Hofstra University made the news for: a) Forcing pledges to perform oral sex, b) Getting kicked out of cab in the dead of night on the Interstate for kissing, c) Suing the school after it removed a Pastafarian tribute to the Flying Spaghetti Monster, d) Wearing T-Shirts that said lobsters were an abomination.

Q6. In Greece v Galloway, the Supreme Court ruled: a) That a school district had the right to ban bracelets reading: ‘I Heart Boobies,’ b) That a for profit company could sidestep federal law based on the owner’s faith, c) That a town council could start virtually every session with a Christian prayer, d) That a prospective juror may not be dismissed based on sexual orientation alone.

Q7. In 2014, 19 states moved to marriage equality. How many of these states were not under a mandate from a federal appellate court? a) Three, b) Two, c) Four, d) Zero.

Q8. Catholic institutions reacted to marriage equality by: a) Firing a recently married music teacher, b) Barring two elderly parishioners from communion based on their Washington wedding, c) Dismissing a pregnant lesbian teacher who was starting a family with her wife, d) Dumping a hospital administrator who wrote an op-ed in favor of equality, e) All of the above.

b) “Gays are fine, as long as “they leave the children alone.”

c) “I would never do an ad with a homosexual family.”

d) “My belief system in the Bible says you can’t be gay. That’s a sin.”

e) “I may have the genetic coding to be an alcoholic, but I have the desire not to do that and I look at homosexuality the same way.”

f) “If your parents were faggots, you horrible gay cunts wouldn’t have been born.”

g) “I respect (gay people), but honestly I don’t think it’s a good example for kids.”

Q10. After marriage equality, the next objective of the gay rights movement will be: a) Adding “sexual orientation” to the list of classes protected against discrimination under Title VII of the Civil Rights Act, b) Defeating legislative efforts that purport to protect religious freedom at the expense of LGBT customers, c) Consolidating the global community in a fight against homophobia in Africa and the Middle East, d) Raising money for a coffee table book that features penises illustrated by lesbians.

A1. c) A judge felt that Bailey’s was a feminine drink.

A2. a) Considered useless as a stud, the owner was sending Benji to the butcher block.

A3. c) and e) It was the Latvian Foreign Minister, Edgars Rinkevics, who came out of the closet, and Tony is simply a straight ally.

A4. b) I wonder if the book is out. It’s called Gay Men Draw Vaginas.

A5. a) Did I forget to say “allegedly?” Sorry! The girls in the cab were from Portland Oregon, and were coming home from a Vegan Strip Club.

A6. c) It’s actually Town of Greece, but that makes it obvious. The juror case, which elevated sexual orientation to a suspect class, came out of the Ninth Circuit. The High Court ducked the bracelet case in favor of the students, and ruled for corporate religious freedom in the Hobby Lobby case.

A8. a) b) and c). I made up the hospital administrator but really, how many examples do we need?

A9.  a) Golfer Patrick Reed, to himself after missing a putt.

f) Some nutcase from Newcastle named Paul Gair, who was charged with hate speech after a Facebook rant.

A10. Don’t know the answer, but I have my sketch pad handy.