The Rostow Report by Ann Rostow | 11.14 | The Fight Magazine 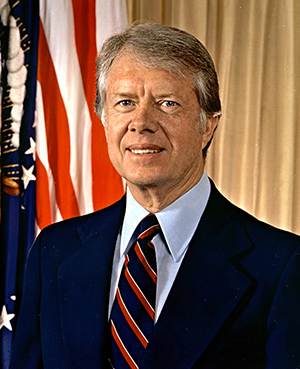 Jimmy Carter recently announced that he thinks states should be allowed to devise their own marriage policy. I know he’s considered a great ex-President, but I think he should stick to building houses and making inappropriate comments about Middle East politics.

Where to start? When last we met just a month ago, marriage was legal in 19 states. Now, as October draws to a close, marriage is legal in 32 states, and another three states are fighting a lost battle to escape binding appellate court rulings. Those, for the record, are Kansas, Montana and South Carolina, where marriage bans can no longer survive legal review, but where officials are still pledging to “defend state law.” It’s just a matter of days really before judges in those three states slam down the gavel on these charades.

The U.S. Supreme Court and our very own U.S. Court of Appeals for the Ninth Circuit delivered a one-two knockout punch a few weeks back. First, the Supremes stunned lawyers around the country on October 6 by declining to review legal opinions that effectively legalized marriage rights in 11 states.

A day later, the Ninth Circuit delivered own its ruling, opening the door to equality in an additional five states. With the exception of the three recalcitrant grandstanders mentioned above, all of these newcomers to same-sex marriage have followed the rule of law and bowed to the courts.

So, how about those other 15 states, you’re wondering? As you may know, we are waiting on the Sixth Circuit for a decision that will cover Ohio, Michigan, Tennessee and Kentucky. That could come any day now, and it’s increasingly difficult to predict the outcome. If we lose, the High Court must intervene in order to resolve the constitutional principles at stake.

Really? Listen, at this point I hardly trust myself to anticipate anything this Court might do, or not do. I was the one assuring all my readers that the Court had “no choice” but to accept review of at least one of the marriage cases that they were considering late last month. I was wrong, and I was in good company—namely ninety-nine percent of the rest of the cohort that sits around fantasizing about the Supreme Court’s shenanigans. So could the justices just sit on their hands if the Sixth Circuit breaks with all the other appellate courts and upholds “traditional” marriage? Could I possibly be wrong again? Nah.

As for the Fifth Circuit, they have just announced that oral arguments in the parallel cases out of Texas and Louisiana will be heard in the first week of January. Mississippi’s fate also hangs in the balance, as the College Football State falls under the Fifth’s jurisdiction.

Then we have the Eleventh Circuit (Florida, Georgia and Alabama) and the Eighth, which covers the last five non-marriage states (Arkansas, Missouri, Nebraska and the Dakotas).

The Eleventh has a case pending from Florida, where we won an equality victory last August. But Florida also has a state case that could conceivably beat the federal appellate court to a decision. Arkansas also has a state case pending a ruling by the Razor Back Supremes. And though marriage cases continue at the federal district court level in other Eighth Circuit states, there are no decisions on appeal yet. I should add that Missouri has carved out a special niche by refusing to appeal a federal court that ordered the Slave State to recognize marriages from elsewhere.

Marriage marriage marriage. Who cares! Oh, of course we care. We’re just a little tired. So here’s something I thought I’d mention. The other day I noticed a full page ad in the New York Times from GLSEN (Gay Lesbian and Straight Education Network) urging people to stop using the word “gay” in a pejorative context. The ad is part of a multi-media campaign, sponsored as a public service by the Advertising Council, aimed to call attention to bullying and name calling.

I think it’s great. I only wonder why the ad was placed on the inside back page of the Sunday Business Section. Seriously? Who reads that? I’m a devoted Times reader, but I would only read the business section if a) I had already read every other Sunday section, which is a time-consuming exercise, and b) if I had nothing better to do than read every single page of the Sunday New York Times, which suggests an alarming dearth of imagination.

Those two criteria were indeed both met a few Sundays ago when I stumbled upon the ad, but who else would have seen it? A couple of CEOs and some MBA students?

So let’s see here. It’s Chevy Truck Month for the tenth time this year. I know I must have mentioned this bete noire previously, but how can these people get away with this irritating advertising ploy?

Jimmy Carter recently announced that he thinks states should be allowed to devise their own marriage policy. I know he’s considered a great ex-President, but I think he should stick to building houses and making inappropriate comments about Middle East politics.

I’ve recently learned of a 2013 account of the Matthew Shepard murder called The Book of Matt, which goes into detail about meth use and other things that don’t fit neatly into our understanding of the crime. I haven’t read the book, but I understand it was written by a gay guy, who spent 13 years researching the case and interviewed over 100 people. Many members of our community are outraged at the suggestion that Shepard was anything short of an angelic victim of gay bashers, and the subject just came up again thanks to an article in the Guardian.

But really. The murder of Matthew Shepard was a tragedy regardless of the killers’  motives. And the outcry over hate crimes that it provoked was righteous passion regardless of whether or not other factors came into play. Don’t you think? You don’t? The iconic Rosa Parks was coming home from a hard day at work and just decided she had had it up to here with sitting on the back of the bus. In fact, Parks was a civil rights activist who deliberately served as a catalyst. Do you respect her any less?

Oh, there’s tons more marriage bits and pieces, but I was struck by a motion to a federal court in Kansas, where a straight married couple would like to intervene in a marriage case. Ignoring federal procedure for the moment (which says you can’t intervene in litigation just because you have an opinion on the matter) this couple has done what right wing attorneys have not been able to achieve.

They have put their finger on the real reason for the opposition to same-sex marriage, and I paraphrase: If gay men and lesbians can call themselves married, we will no longer be happy using the same word to describe our relationship.

That’s it in a nutshell! It’s my word and I don’t want anyone else to use it without my permission. That’s what it’s always been about and unfortunately for the couple in question and others of their ilk, it does not pass constitutional muster. In a further irony, the couple’s name is Unruh, the eponym of civil rights in California.