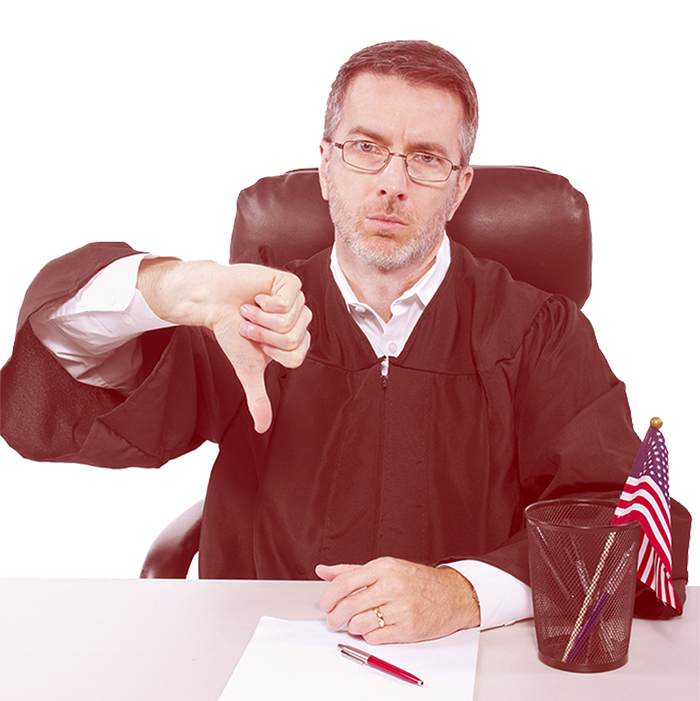 The vast majority of individuals, who are not members of the legal profession, are not aware of the increasing level of injustice that has emptied from the state of California’s civil judiciary system.

In California, a most disturbing and far-reaching form of tort reform has taken effect. According to an official, the judiciary’s general fund support has been slashed by more than 65% since 2008. And all of this occurred without a single up-or-down vote from any Californian. It occurred with a swipe of Governor Jerry Brown’s pen along with the insulting, yet fulfilled, prediction that there would be a meager and manageable public outcry. All this, while legislators from both sides of the aisle have called on Gov. Brown to increase funding from the inappropriate level we have sunken to.

Imagine being victimized. It doesn’t matter how: (1) A person you do business with doesn’t pay you your money; (2) you’ve been injured in an accident caused by another; or (3) your insurance company refuses to pay out on a claim that should be covered. The examples are countless. Yet, the common thread of each victim is they would likely seek their money and justice in State Court.

When I began my law practice years ago, a civil trial was routinely set and conducted, if necessary, within one year of filing of the initial complaint. Nowadays, due to Gov. Brown’s budget cuts, a victim in Los Angeles would be lucky to see a trial within two years. Last week, the law and motion department of the Los Angeles Superior Court gave me a March date, for a simple motion hearing, 6 months from now.

Thus, as a victim’s rights lawyer, my initial investigation used to focus on whether I could prove the victim’s case in Court. Now, I am forced to ask victims “can you afford to wait for justice?” I even have to ask myself sometimes “can I afford to wait for justice?” Second to this travesty, is the fact that persons and entities, much of whom are represented by insurance companies, are well aware of this new calculus for victim’s rights lawyers taking on new cases. It’s as if, or if I may I claim that it is actually true, that insurance companies have scored the ultimate tort reform in California without a single vote from a citizen or a single law being passed.

For decades, insurance companies have lobbied government for “tort reform.” The kind of tort reform they seek is invariably dressed up in language that implies an overall public benefit. Yet, also invariably, such legislation crafted and designed to limit, stifle, and/or outright prevent victims from obtaining justice. Sadly, we have been bred to accept such behavior from insurance companies.

The whole situation eerily reminds me us of what Muhammad Ali famously pronounced: “It isn’t the mountains to climb that wear you out; it’s the pebble in your shoe.”

According to Salar Hendizadeh, a Los Angeles attorney taking on the fight against California insurance companies, “they are at the forefront of a national strategy aimed at placing significant obstacles for a victim’s ability to receive just compensation for injuries suffered in a reasonable amount of time. We must confront the insurance industries tacit support for the reduction of financing to the California courts. This is effectuated by dissuading citizens from attempting to get what they are clearly entitled to under the law.”

Even judges are aghast. According to California Chief Justice Tani Cantil-Sakauye, the courts need an additional $266 million “just to tread water” in the coming fiscal year, $612 million to be fully functional, and $1.2 billion over three years to make up for past cuts.

Perhaps it was best said by Presiding Los Angeles Superior Court Judge David S. Wesley: “It’s the biggest change in the way law has been practiced in Los Angeles County in the history of the court… We are a place of last resort for people in distress, and it doesn’t matter if they’re rich people or poor people. So when I cut those services, everybody’s going to suffer.”

Retired Judge Stephen Jahr believes that things may get even worse than the status quo. Unless more money isn’t injected into the civil court system, cases “being filed today will not get to trial until five years.”

This article will end with a stunning belief, followed by the provocative question we should each ponder: “I don’t believe we are becoming a more law-abiding, rule-following society… [We] have closed more than 50 courthouses and eliminated 3,900 full-time positions. So are people finally getting the message they shouldn’t bother to come to court?”  —Justice Tani Cantil-Sakauye