Tightening The Race | The Fight Magazine 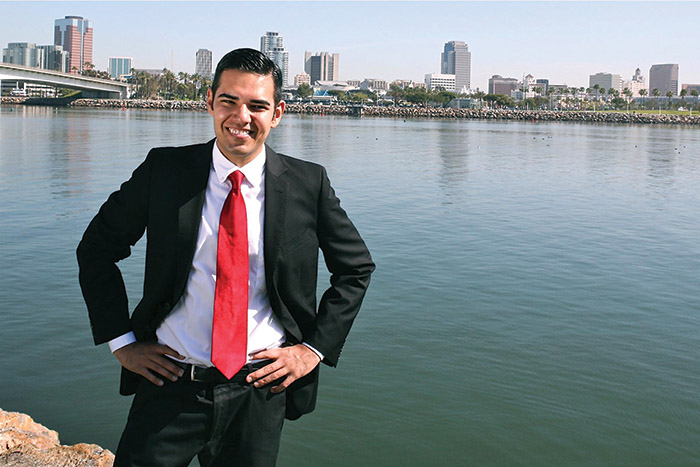 Openly gay vice Mayor Robert Garcia has tightened the race to becoming the next mayor of Long Beach in the runoff elections on June 3.

Garcia was born in Lima, Peru. He came to the United States with his family on a visa when he was 5 years old, and they immediately began the process of obtaining permanent residency and citizenship.  He took the oath of citizenship in the early 90s.

If elected, the college professor and member of the California Coastal Commission would become the city’s youngest, at 36, the first Latino, and first openly gay mayor.  Departing Mayor Bob Foster and the Press-Telegram newspaper are endorsing Garcia.

In an interview with THE FIGHT Garcia talks about his college years, coming out and Long Beach politics.

My mom often worked two jobs at once so I didn’t see her much. My grandmother raised us and she taught us the value of working hard.

Growing up in Covina – how would you describe your childhood?

I was a happy kid. Even though we grew up without much money or support, my family was close. My mom often worked two jobs at once so I didn’t see her much. My grandmother raised us and she taught us the value of working hard.

At what age did you come out to yourself, your family, your friends?

I was 22 or so. I had just graduated college. I figured out I was gay in college.

What was the coming out process like for you? How did your family, friends react?

My experience was pretty good. Both my parents were supportive and my friends were great. Most people were not surprised.

At what age did you become interested in politics?

In college I ran for student body president and I won. I was able to advocate for student scholarships, financial aid, and for student programs. I learned a lot about working with others and fighting for what you believe in.

When did you become involved in local politics in Long Beach?

What would you say are your major political accomplishments – to date.

When I was elected we had a $40 million budget deficit, today we have a surplus. Crime is at a historic low, and we’ve reformed public pensions that will save the city over $250 million over 10 years.

I also authored our city’s first anti-bullying law for our after school programs, opened the first park in America named after Harvey Milk, and got the city to include trans-inclusive healthcare in our policy for city employees.

As mayor of Long Beach, what would be your top priorities for the city?

Most importantly we need to ensure that we stay fiscally responsible. We need to focus on the budget and invest in growing our police force. We also need to ensure we are protecting the environment and focusing on poverty.

Please remember to vote on June 3.