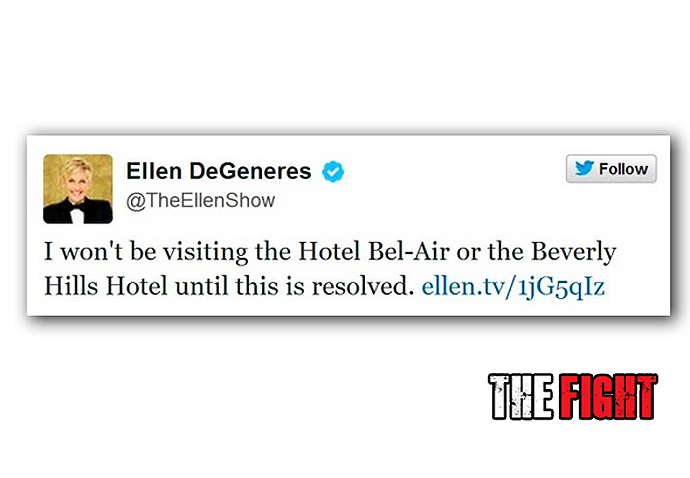 Prominent public figures such as Ellen DeGeneres, Jay Leno, Sharon Osbourne, Bo Derek, Mia Farrow, Sara Gilbert and entrepreneur Richard Branson, have joined the boycott of the Beverly Hills Hotel after Hassanal Bolkiah, the owner of the hotel and Sultan of Brunei–a small Southeast Asian nation–instituted outrageous anti-gay legislation in his home country that includes death by stoning for gay sex.  The Sultan also owns the Dorchester in London.

The Night Before fundraiser, a pre-Oscar party which benefits the Motion Picture Television Fund, have cancelled their event at the Hollywood elite hotel in the midst of the controversy.  Oscars host Ellen DeGeneres twitted that she will no longer be staying at the Beverly Hills Hotel until the problem is resolved. The Out Giving Conference, an event for wealthy LGBT donors hosted by the Gill Action Fund, also cancelled their conference originally planned at the Beverly Hills location.

Dorchester Collection CEO Christopher Cowdray, flew in to Los Angeles to deal with the backlash.  He stated that protesters were merely hurting a local business and its 650 employees, who mostly rely on tips from the hotel’s guests. He insisted that the hotel has done “absolutely nothing wrong” and he felt “totally unfairly picked on”.

“There’s other hotel companies in [Los Angeles] that are owned by Saudi Arabia,” Cowdray told the press. “Your shirt probably comes from a country that probably has human rights issues. To single out the Beverly Hills Hotel and the Dorchester Collection and particularly our employees is very unjust.”

He declined to give an opinion on the laws being introduced in Brunei, saying the correct avenue for protest was through the US State Department.

Cowdray’s comments were met with outrage via social media and from several gay rights activists.  Lorri Jean, CEO of the LA Gay & Lesbian Center immediately released a statement calling Cowdray a coward for saying that he flew to California yesterday to show his support for his employees – presumably including the LGBT ones – while in the same breath saying that he has “no opinion whatsoever” regarding his boss’ law that would condemn those same LGBT employees to death.

You can read Lorri Jean’s open letter below.

I was shocked and outraged by the comments you made in a ‘CBS This Morning’ interview that aired today regarding new laws in Brunei that punish LGBT people and others with death by stoning. How is it possible for any person of good conscience, let alone the head of a British-based company that no doubt employs large numbers of LGBT people, to say you “don’t have any opinion whatsoever” on whether LGBT people should be stoned to death?

In your interview you told reporter Ben Tracy that you flew to Los Angeles to “show your support” for your employees. I have no doubt your words were of little comfort to the hundreds of Dorchester Collection employees who would be murdered by your employer if they were unfortunate enough to live in the country he rules.

Your non-committal response is less than cowardly, it is equal to tacit approval.  I ask you quite plainly: if one of your LGBT employees, whom you claim to care so deeply for, were being stoned to death in front of you or on television for the world to see, would you still have, “No response whatsoever?”

You also said that you are feeling “picked on” by those of us who are standing up against the sultan’s brutal and inhumane laws, cloaked as religious doctrine. If you feel bullied by our call to boycott properties owned by the sultan, I’m sure you can understand why it’s difficult to pity you.  You are not the victim. Unlike LGBT people in Brunei, you are not risking your life simply for being who you are.

I can assure you that until either the sultan reverses course in Brunei and repeals all laws attacking the LGBT community and women, or until the Dorchester Collection is sold to owners who respect all human life, dignity, and worth, we will continue to urge people to take their business to other hotels.  And we will not stop fighting his barbaric laws.

You are the C.E.O. of a company owned by a man who is personally responsible for the passage of laws that call for the murdering of innocent LGBT people. You do not have the luxury of remaining silent and having no opinion. Your silence is a stone in the arsenal of your sultan.

And you should be ashamed.