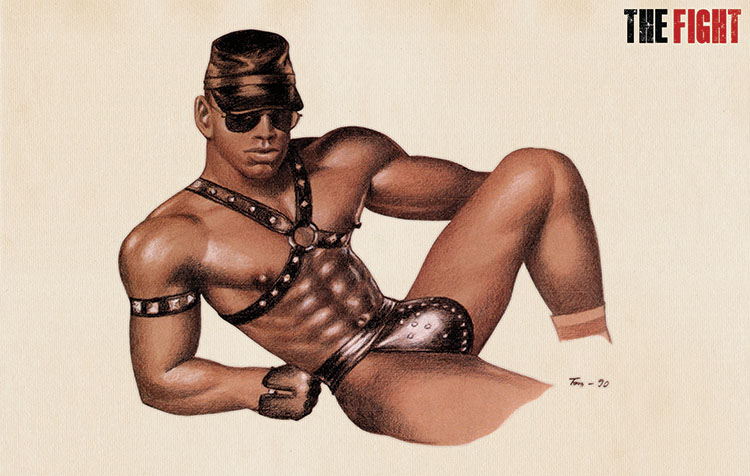 We have embraced everything from saving the rain forest to worrying about what kind of food our great grandchildren will eat … yet we can’t help confront the proverbial elephant in the room.

I AM A BIT NERVOUS about writing this article for it is twenty-four years in the making. To some it might seem silly that I even care about this at all, but I feel that it is important that I say this out loud. “I’m a black gay man in Los Angeles and I’m hot, damn it!”

I think it would be easier to explore this topic if I form it in a question the way the fictional “Sex and the City” character Carrie Bradshaw would ask… “When will Black be “The New Black?”

It is an important question in our community given the politically correct, soy latte, kale eating, no peanut ingesting society that we’ve become. We have embraced everything from saving the rain forest to worrying about what kind of food our great grandchildren will eat … yet we can’t help confront the proverbial elephant in the room.

How can we—as a gay society—ignore the fact that we romanticize, fantasize and objectify black guys in our community?

When you see a black and white guy together you automatically assume that the black guy is the top. You presume he has a big cock. These are objectifications that we—as a society—have made based upon assumptions that have been made over time. Fried chicken and watermelon anyone? Don’t get me wrong—the same arguments can be made about other races and their stereotypes, but this article is specific to this issue.

When I moved to WeHo in 1989 all the guys wanted to look and dress like George Michael. You know, faded denim jeans with a giant hole ripped at just the right spot in the knee, pointed toe Zodiac boots, oversized denim or leather jacket and that ever prominent pony tail…usually blonde sticking out of the back of a baseball cap with the metal “BOY” plate across the front.

This is what I walked into. This is the community that I was enamored with after leaving my very conservative neighborhood in Detroit. Looking around I didn’t see anybody that looked like me. So I did what anybody who wanted to fit in would do, I attempted to blend in. I ripped my faded denim jeans at just the right spot in the knee, got some pointed toe Zodiac boots (with the silver tip), put on my oversized denim jacket, slicked back my Jheri curl (YES I had one) into a pony tail under my baseball cap and proceeded down to the Rage with all the other young guys. Even though I was dressed the same as them—I looked as much like they did as Wanda Sykes looks like Angelina Jolie. But I wanted to belong… I looked ridiculous!! Not because of what I was wearing, but because I thought that if I wore what the white guys wore then I wouldn’t stand out.

If you are the only ketchup packet in a bowl filled with nothing but mustard you’re gonna stand out. Back then when you went into a restaurant on Santa Monica Boulevard there weren’t any hot young Asian guys around and the only Latinos you saw were the cooks and the dishwashers… not servers, not bus boys. The friends I made didn’t care whether or not I dressed like them, but you could tell that if you didn’t look the part—you would not be accepted or included in the same way. You can call it being 22, but that’s just the way life was and STILL is.

It wasn’t very long until I met three other black guys in WeHo. So there we were. If the census bureau went to Mickey’s on a Saturday afternoon they could take to census of how many black guys lived in West Hollywood in one fell swoop…FOUR. I know it sounds funny and I’m sure there were others, but you never saw more than the odd sprinkle of color around.

Around 1992 hot Latino boys started invading the clubs. It was wonderful to see brown skin! Several moved to WeHo, but many lived at home with their family in East L.A., Echo Park or Hollywood. The difference was there were not just three or four of them—there were ten to twenty. You could see a definite visibility of brown skin boys. And slowly but surely as the months went by you would see those same boys partner off with one hot muscle blonde guy after the next. Soon the word got around that it was ‘chic’ to have a Latino boyfriend. About a year went by and the Asian boys started to surface. The same thing started to happen…

I was patient. I knew that the black guys would soon get their turn to be the flavor of the month. Yes, I realize that I was actually waiting to be subjected to this ridiculous selection process. But I wanted my turn. And more than that it was the fact that IF I wanted to have a white boyfriend—I could.

It was more of a numbers game. There were probably 25 white boys for every “brown skin.” And strangely enough it was a very quiet, unspoken thing that all the brown skins were competing for the same prize. Weird huh?

Since those days, back in the 90s, I’ve become an active part of the leather community. Today—I know who I am. There is, however, still a part of me that occasionally reacts to certain situations because of those early days. It is hard to shake those feelings when you see things that scream a repeat of history…

Moving on, over the past few years, I have been overjoyed at the sight of many brown skin guys stepping up and being recognized as community leaders both in the general gay community and specifically our leather community.

In this 2014 leather class of title holders there are not one but two hot sexy black men who are taking their place amongst those most desirable!

I still feel like we have a long way to go and I don’t think that we, as a community, have fully addressed the issues. But the one thing I do know is my black ass will continue to be right there… front and center, being me.