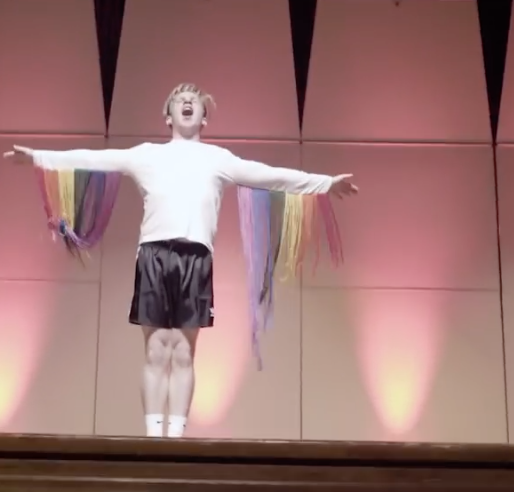 At George Fox University, a small private Christian college, the slogan promises “each student will be known — personally, academically and spiritually.” Reid Arthur, a senior theater major, held the school to that promise, reports Teen Vogue.

Each year on campus there is a lip sync battle for George Fox’s student body. Arthur had participated before, lip-synching to Taylor Swift. But after he heard Swift’s “You Need to Calm Down,” he knew he could use it for something special.

“I listened to it and I danced around and cried and was overjoyed and thrilled,” Arthur says. “I was like, ‘Oh, my gosh, this is incredible. I could come out during this,’” reports Teen Vogue.

So he did. In a five-minute performance at the college that has denounced same-sex marriage, Arthur first lip-synchs to Swift’s “…Ready for It?,” then transitions to “You Need to Calm Down.” When the lyrics, “’Cause shade never made anybody less gay” play, Arthur’s backup dancers rip off his coat to reveal a white T-shirt with rainbow strings hanging from its sleeves, meant to tell his classmates that he’s gay. The crowd gave Arthur a standing ovation and he won first place, which was $500 he says he plans to donate to an LGBTQ organization.