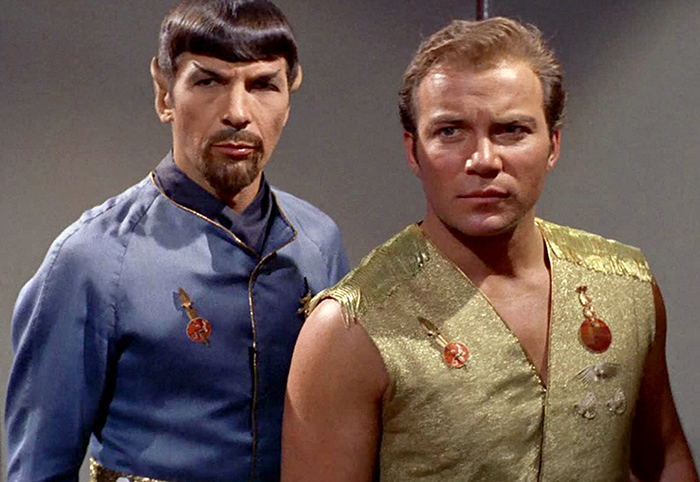 We went two steps forward and then got beamed into the mirror universe. For those of you who are not Star Trek fans, that’s not a great place to be.

You know dear Readers, I’ve been writing columns like this for over twenty years, and over that time, life has improved a thousand-fold for LGBT Americans. It’s improved so much that not even Mr. Trump and his hateful minions can possibly take us back to the bad old 20th Century.

But there is something worse than the pervasive, intuitive disgust that the majority felt for us back then. I’m talking about what happens when we reach many of our civil rights goals, and come close to equality, only to have them taken back.

For so long as we’ve been forging ahead, Americans have been revising their opinions, accepting the fact that we are their neighbors and friends (etc, etc, etc). Now, they are being given the chance to say, “You know what? We’ve gone far enough. Those gay and trans people aren’t that great. In fact, they’re sort of full of themselves. Let’s take them down a peg.” The soundbites of activism don’t resonate when the situation gets complicated. And let’s face it. For many of our compatriots, their worst instincts are being allowed to flourish. That’s not good for us.

You may have read that the Trump administration is hoping to impose rigid gender definitions on dictates from the federal government. The news stems from a months-old old memo out of the Department of Health and Human Services that basically just reflects Trumpite distain for the whole LGBT community.

No one can rewrite some bureaucratic policy to “erase” transgender men and women. No one can “rule” that transgender men and women don’t exist. But the various cabinet agencies can indeed make life harder for us. For years now, many federal courts have interpreted laws against sex discrimination to cover some cases of transgender and gay discrimination as well. The Trump administration can’t change that, but it can empower conservative courts to buck the trend. It can employ conservatives at federal agencies to rewrite Obama’s LGBT-friendly guidelines. It can appoint far right judges to the appellate courts (and it has). And it can rush cases to the High Court, which is now poised to reverse or stall many of our legal gains.

If transgender people or gays are not covered by existing federal laws, we will have to wait for Congress to pass civil rights laws on behalf of our community. That’s a long wait. Indeed, since LGBTs are not yet definitively covered by current law, the scope of current law must eventually be determined by the Supreme Court.

Our situation doesn’t look good. And as I was trying to say, it’s not a question of two steps forward, one step back. We went two steps forward and then got beamed into the mirror universe. For those of you who are not Star Trek fans, that’s not a great place to be.

You know, speaking of Star Trek, I just saw an episode that reminded me of one of my pet peeves on television, which I may have mentioned before. It’s when the characters go into a bar, order a drink, someone calls and they leave the entire drink untouched. It’s not an emergency. It’s more like the detective sergeant calling them back to the office, or senior staff called to the bridge. There’s plenty of time to chug the drink, or at the very least take a sip. But no. They’re like, “I have to leave,” and up they go. Who does that?

Moving on, I mentioned earlier that the Trump administration is rushing conservative cases to the High Court. Plus, now that the Court is officially a hard right group, we are starting to see creepy things come out of the woodwork including a new antigay bakery case out of Oregon, from whence you may remember Sweet Melissa and her hubby from ages ago. Indeed, we thought that one was over and done with after the treacly Christian refuseniks were ordered to pay $135,000 in 2015 for violating state anti-discrimination law years earlier. Now, they have asked the High Court to reverse the fine. We also expect the antigay florist case in Washington state to rise back to High Court level so it’s pretty clear that the justices will have a chance to “clarify” Justice Kennedy’s turbid opinion in the Masterpiece Cakeshop case.

The infuriating thing about these gay wedding cases is that they are presented as if some nitpicking gay people are trying to force nice Christians to go against their deeply held faith rather than just go down the street and find another bakery or florist!

But that’s not what they’re about. They are about business owners who insist that they do not have to abide by state anti discrimination law. They don’t need an explanation other than “faith,” but what if one’s “faith” suggests blacks are inferior? Settled law says race-based civil rights laws outweigh religious exemptions, which brings us to the real question: Why are gay civil rights laws less enforceable than racial civil rights laws? They shouldn’t be. And if gay rights laws are toothless, that means we have no means of protecting our civil rights within the political process. Why struggle to pass a gay rights law if the public can ignore it at will with a religious shrug of the shoulders.

There are many other legal issues of interest to us that are now headed to the nine justices during this antigay window of conservatism. There’s the aforementioned question of whether existing civil rights laws that protect on the basis of sex apply to our community. Those include Title VII (workplace protections), Title IX (education protections) and language in the Fair Housing Act and the Americans with Disabilities Act and elsewhere. Can a transgender male student be forced into the girls room, or a faculty bathroom, or is that unfair discrimination? Can an effeminate gay man be relentlessly harassed without recourse on the job? What about a regular old gay man or lesbian?

There are also three or four cases challenging Trump’s attempt to ban transgender military personnel now pending in the federal system, several of which have already gone up to the appellate courts for interim rulings. So far, we have won everything. After all, Trump claimed that he acted on the basis of military advice, which was proven false, and also said transgender troops were too expensive, another easily disproved motive. Left with nothing, the only way Trump will win is to reach the High Court and let his buddies issue a craven decision in his favor.

We’ll see. For the first time in this century, however, our strategy is to keep important issues away from the High Court docket, not to push ahead. Sad.

THOSE WERE THE DAYS

What a downer of a column!

It’s a cold wet day in Austin, Texas, as I write, and we have been told to boil water temporarily since flood waters have screwed up our water treatment plant. I’m okay with it. (Think of many other parts of the world!) But some of my fellow Austinites have barged into stores and insanely bought cases and cases of water. What is wrong with people? Who needs thirty gallons of water for a couple of days?

Meanwhile, everything I see is negative. Maybe our midterm blue wave is only a ripple. (No!!!) Here are five signs that you’re about to die of a heart attack. (I didn’t look). Bombs are being sent to Democrats. Trump is still in office. Oh, I love this— I have seen several email headlines warning me about the hazards of winning a billion dollars in the lottery. And life goes on.

A while back, I would have cheered myself up with the three Cs: Cocaine, cigarettes and Champagne, aka the breakfast of champions. But those days are long gone.

But hey, as long as we’re backtracking… I’ll start with a pack of Winston Lights and a bottle of Bollinger.