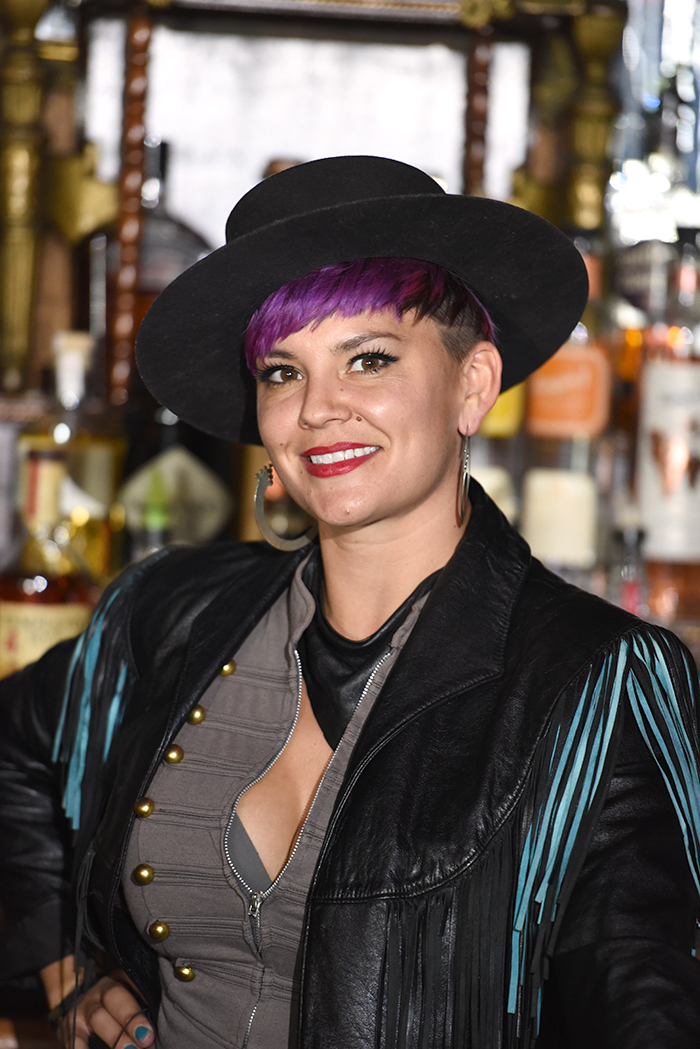 While many revered figures in the Kink Community have been instrumental in bringing the Leather District into the world, there is one person whose contributions deserve special recognition: Stud Collective President Rachel Ryan.

It’s official: Members of the Leather community gathered on June 12 to cut the ribbon on the new Leather and LGBTQ Cultural District, inaugurating what is almost certainly the world’s only Municipally-recognized cultural district celebrating kink and fetish culture.

Located South of Market, stretching from 7th Street in the North to the 101 Freeway in the South, and Howard in the west to the 80; it the second of three proposed Historic Cultural Districts recognizing the unique legacies and contributions of San Francisco’s Queer Communities—the first being the Compton’s Transgender District in the Tenderloin, and a Gay and Lesbian Cultural District in the Castro expected to be a reality before the end of the year—and recognizing those communities right to continue to live in and own business in the neighborhoods they have called home for decades.

Of course Historic Cultural Districts do not simply appear out of thin air, they are the product of hard work and organizational skill. And though many revered figures in the Kink Community have been instrumental in bringing the Leather District into the world, there is one person whose contributions deserve special recognition: Stud Collective President Rachel Ryan.

Ryan is one of those near mythical creatures, a city-born San Franciscan. She came into the world in 1984, grew up in a charming little Noe Valley Victorian, and attended a small private school in the Castro. But paying tuition for Rachel and her two brothers presented a seriously daunting challenge, so her parents packed up the family and moved to Marin to partake in some of the best funded public education in the State of California.

When we formed the Stud Collective two years ago, we set out to save one bar that was near and dear to our hearts; but at the same time my hope was that we could inspire other folks to join this movement to help save other institutions…”

“My mom was an elementary school teacher and my dad is a general contractor—he started his own company and it has been located in Soma for over 35 years—first on 9th street, then across from the Eagle on 12th street since 1991. My family is amazing—incredibly warm and inclusive, fun and liberal. I hit the jackpot with them—they have always been incredibly accepting and supportive of me.”

Growing up, Ryan says that she was always attracted to boys and girls, but the first time she really realized she was queer the first time “I saw Tia Carrere in Wayne’s World; and I knew I was kinky when I experienced Michelle Pfeiffer in Batman Returns! Hahaha!”

But having two serious back-to-back relationships with men from 18-25, she says that she didn’t have the confidence to publicly identify as queer.

“I never liked the term bisexual—it was an identity that I saw getting so much shade from the gay folks I grew up around, as well as in queer pop culture, and I felt inauthentic claiming to be part of the queer community from within a hetero relationship. But at 25 I definitely began to discover myself as the queer weirdo I am today.”

As an adult Ryan moved back to the City, and found herself naturally gravitating toward life (and nightlife) in Soma.

“The culture of Soma is so wonderfully unique, and still feels like a special kind of sanctuary for kinky and weird queers. I love the way that things that outsiders might perceive to be disparate elements go hand-in-hand—whether its tough looking leather folks who tirelessly raise money for charity or drag queens who are devoted to community organizing, the heart in this neighborhood runs deep.”

Soma’s Queer and Leather communities date back to the very tail end of the 1940s. After World War I many gay servicemen ended up in San Francisco, gathering in the bars along the waterfront on the Embarcadero. They eventually moved inland, drawn towards the largely abandoned industrial areas located “South of the Slot” (named for the iron tracks that cable cars ran on along Market Street). Soma was also home to several homophile organizations and gay publishing operations, and soon gay bars and bathhouses filled the neighborhood. The Tool Box was Soma’s first leather bar, opening its doors in 1961, and the neighborhood became the booming, bustling capital of leather and Levi’s—until the AIDS epidemic hit. Amidst the devastation of the plague, countless bars and bathhouses were shut down, and instead Soma became the front line for political organizing, AIDS activism and fundraising.

For Ryan, the decision to take a more active leadership role in her community was a slow build, rooted in feelings of helplessness as she watched treasured queer spaces like the Lexington Club and Esta Noche get shut down, and dear friends lose their housing and move out of the City.

“But I started to get inspired as I watched the ways in which my friends were pushing back, especially Honey Mahogany in her work to establish the Compton’s Transgender District in the Tenderloin.”

That sense of inspiration led Ryan to join the 18 person collective of artists, performers, and activists who organized to buy the Stud in 2016, and later to step up as the collective’s President. Anyone who has ever run a bar can tell you that it’s a more-than-full-time job. Nevertheless, Ryan has devoted almost all of her free hours to the creation of the Leather District, spending the last year and a half working as a community organizer—doing neighborhood outreach, talking with local stakeholders, and holding community meetings. And it seems that the SOMA Leather District—and its siblings in the Tenderloin and Castro—are arriving in the nick of time.

It’s the same story all over—we are all battling rising rents and competing with Tech companies and developers who have loads of money to throw into the ring. There are so few brick and mortar institutions serving the leather and kink communities left in Soma, and many of them are still at risk of closing. The Stud Collective has spent the last two years working tirelessly to keep what is now San Francisco’s oldest gay bar open, but we are struggling. We fought tooth and nail to renegotiate a longer lease, but our time at 9th and Harrison is up at the end of this year. If the Stud can’t find a new home in the next couple months, it will disappear. And other local spaces like Wicked Grounds (the kinky coffee shop on 8th street) and the Catalyst (the dungeon and community space on Folsom) are in the same boat—struggling to pay their rent and keep their doors open.”

Ryan sees her work with the Stud and the Leather district as closely related—both are radical models that are attempting to protect Queer cultural spaces and propel them forward.

“When we formed the Stud Collective two years ago, we set out to save one bar that was near and dear to our hearts; but at the same time my hope was that we could inspire other folks to join this movement to help save other institutions. And when I saw what the Cultural Districts were doing, I saw an opportunity for our neighborhood bars, businesses, residents, artists and organizations to work together to stake our claim.”

I never liked the term bisexual—it was an identity that i saw getting so much shade from the gay folks I grew up around, as well as in queer pop culture, and I felt inauthentic claiming to be part of the queer community from within a hetero relationship. But at 25 I definitely began to discover myself as the queer weirdo I am today.”

The goal of the Cultural Districts is to stabilize San Francisco’s rapidly evaporating Queer communities and mitigate the displacement that all LGBTQ folk are facing. For Ryan, celebrating the history of these communities is important, that is only a small piece of this movement.

“We don’t just want to put up some plaques that say who was here before—we want services and resources for the people who are still here.”

While new development can be a threat to at-risk communities, a central element of establishing these Cultural Districts is to create a more direct connection between developers and community members so that both parties can be involved in steering the evolution of the neighborhood together. Ryan and the other members of the Leather District’s Governing Board are working to establish a group what will be able to help allocate funding in support of neighborhood residents, artists, businesses and projects.

The memory of her gay uncle Rick—who also went by Rocky—has been a guiding influence on Ryan as she has taken up the cause of creating the Leather District and working to define its role in the community.

Rocky used to frequent the bars along the Miracle Mile in the ‘70s. He and his partner Axel ended up opening their own leather bar called Axel Rock up in Seattle in the early ‘80s. They both got sick in the fairly early days of the AIDS crisis and Axel died soon after, but Rocky lived on.

“Rocky’s health was up and down for the next 20 years and my mom became his main support line—she spent countless hours helping him navigate health and housing challenges. We practically had the Northwest AIDS Foundation and Bailey-Boushay House (the first inpatient hospice facility for people with AIDS in the country) on speed-dial; my mom was on a first name basis with his case workers and caregivers and would bring them homemade cookies when we went to visit.”

At eleven and twelve years old Ryan was included in conversations about T-cell counts and Section 8 housing. She and Rocky were close—exchanging letters, artwork, and phone calls through her tween and teen years. He eventually passed away in 2006.

“He is a big part of why I wanted to help fight for this neighborhood, and why I want to see the District advocate for health services and housing for our Queer elders who are living with HIV.”

If the Leather District successful in securing the funding needed to enact real change, 10 years hence Ryan sees the potential for a Leather District that is vibrant, dynamic, and true to the tradition of kink, leather, and sexual liberation that originally turned Soma into a Queer Mecca.

“I hope to see the District with bars and businesses that are booming, where bathhouses have returned, and where there is affordable housing for seniors living with HIV—I also hope to see more public art so that when people are visiting or moving into the neighborhood, there is no confusion that they are in a place that is kinky and Queer!”

Writer’s Note: The original title of this article, The Mayor of Folsom Street, was a reference to the the late “Daddy Alan” Selby, founder of the legendary Mr. S Leather. Selby was an important leader during the AIDS Crisis, whose infectious spirit, tireless activism, and loving mentorship helped steer San Francisco’s Leather Community through the worst of the Plague Years. That legacy was in the forefront of my mind as I was writing this interview with Stud Collective President Rachel Ryan. The Mayor of Folsom Street was chosen in an attempt to link the past with the present, and engender a sense of hope for the future for both the Leather District and Community in these uncertain times. However, it was a mistake to use that title and not directly acknowledge Selby’s contributions. No disrespect was intended toward Selby’s memory and I apologize sincerely for any hurt I may have caused. If you would like to know more about Selby and his outsized impact please read The Mayor of Folsom Street, a fantastic biography by Jordy Jones:
https://books.google.com/books/about/The_Mayor_of_Folsom_Street.html?id=WHxxtAEACAAJ&source=kp_cover