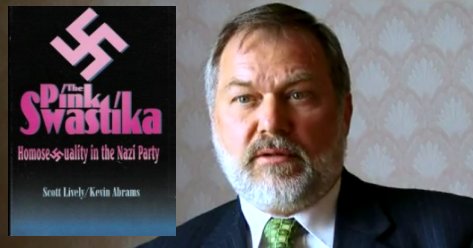 The author of a book claiming that the Holocaust was orchestrated by gay men who ran the Nazi party will appear on a Massachusetts gubernatorial primary ballot later this year after garnering enough support at the Republican party’s state convention last week. Scott Lively will now face off with incumbent governor Charlie Baker in September’s primary, reports Newsweek.

Lively wrote a 1995 book, titled The Pink Swastika, in which he asserted that the Nazi party that took power in Germany in the 1930s was controlled by “militaristic” homosexuals who inspired the murder of about 6 million European Jews. The Holocaust also saw the persecution of a number of other groups, including gays. Lively’s claims have been roundly debunked by historians.